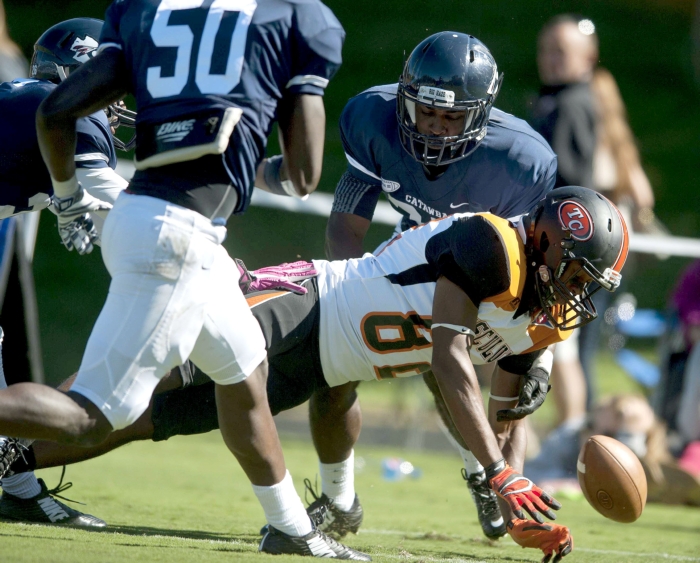 SALISBURY — Catawba defensive backs are breathing a sigh of relief.

Gabe Evans, a hulking tackle, no longer can boast about pacing the Indians in interceptions. Cornerback Mark McDaniel is the new leader. He’s had a pick in each of Catawba’s last three games.

McDaniel, who celebrated his 22nd birthday Friday, has been Catawba’s Defensive Player of the Week three consecutive weeks. He’s stood out on a solid unit that ranks fourth in the SAC in most categories.

McDaniel was nominated for South Atlantic Conference Defensive Player of the Week after two of those three games — the home victory against Tusculum and Saturday’s road win at UNC Pembroke. He didn’t win the award, but he’ll keep pursuing it.

“I’m having a great time and I’m getting an opportunity to make plays for my team,” McDaniel said.

McDaniel isn’t big at 5-foot-11, 185 pounds, but he is thick in the chest and shoulders. When he hits people they feel it. He forced two fumbles in the Tusculum game to go along with his goal-line interception.

“I haven’t gained that much weight since I came to Catawba,” McDaniel said. “But I have gained muscle.”

McDaniel is a local success story, someone you’ve heard about since he was a South Rowan freshman in 2007. South Rowan coach Jason Rollins wanted to play McDaniel on the jayvees, but he was too good. In his varsity debut — he wasn’t even on the roster on opening night — he returned a fumble 70 yards for a touchdown against Salisbury. A week later, he picked off a pass against A.L. Brown, and there were no longer any thoughts of McDaniel having a roster spot on the jayvee squad.

As a sophomore, McDaniel had a 94-yard interception return against Northwest Cabarrus. As a junior on a sound South Rowan team that was quarterbacked by Catawba baseball star Blake Houston, McDaniel had four special-teams TDs — two on punt returns, two on kickoff returns.

As a senior, after South Rowan was depleted by graduation, McDaniel was asked to do a lot. Besides playing cornerback and returning kicks, he rushed for 807 yards, passed for 263 yards, caught 12 passes and scored 17 touchdowns.

McDaniel wasn’t avidly recruited, but Catawba, where his father had played, was where he wanted to go all along. His athleticism proved a pleasant surprise for the coaches, but the Indians weren’t sure if he was best on offense or defense. He played six games as a true freshman, mostly special teams.

McDaniel didn’t play at all in 2012, He wasn’t eligible academically, but he made a nice comeback with a 3.32-GPA semester followed by a strong Blue-White Spring Game.

Catawba was so young in the secondary in 2013 that McDaniel was considered a veteran. He was installed as the starter at strong safety until he bruised a lung at Carson-Newman and missed two games. When he returned, he switched to cornerback and returned an interception for a touchdown against UNC Pembroke.

“Mark is very strong and physical for a cornerback,” Tarrats said. “We work hard against each other. I know he’s made me a better player.”

McDaniel had an interception to stop a Wingate scoring drive on Oct. 11, and he came through with his biggest play this season Saturday when he produced another pick-six. Once again, UNC Pembroke was McDaniel’s victim.

“Studying film, I could see they liked to run a lot of quick outs,” McDaniel said. “And before that snap, I saw their quarterback kind of look at the receiver, like ‘OK, it’s coming to you.’” I just got a really good break on that ball.”

Walker said McDaniel is almost too athletic for his own good. On the interception, he got there so fast, he actually over-ran the ball and had to make an adjustment to pick it off.

“That ball was behind him,” Walker said. “It’s not often you see a DB make a back-shoulder interception.”

Once McDaniel had his hands on the ball, no one was going to catch him. He was credited with 28 yards on the return, and Catawba led 6-0.

“Second play of the game,” McDaniel said with a smile. “A lot of people weren’t even in the stadium yet.”

Brevard is the opponent this Saturday and offers a different challenge from the recent pass-happy teams Catawba faced. Brevard patiently grinds away with the triple option, but McDaniel is looking forward to it. Option teams provide an opportunity to make jarring hits that cause fumbles.

It’s a home game. That means a lot of McDaniel supporters in the crowd.

“Not just my family, but Nathan Lambert’s family — he was my teammate at South — and I know (former East Rowan receiver) Riley Weber’s family well also,” McDaniel said. “It’s always nice to play at home.”