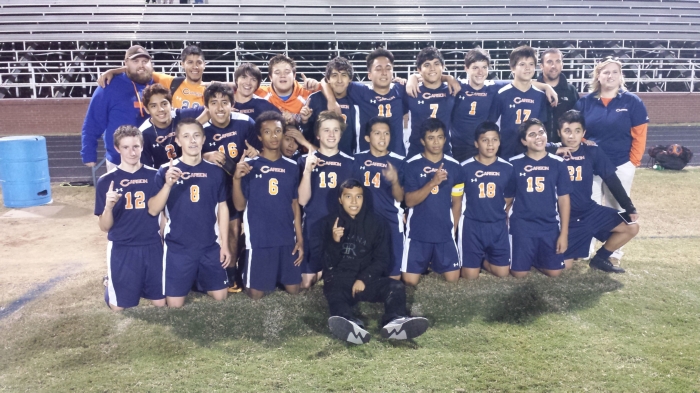 Salisbury’s volleyball season ended with a 3-0 loss at Polk County on Tuesday in the second round of the 2A playoffs.

Juliana Anderson had eight kills for the Hornets (15-11). Breya Philpot had three kills and two blocks. Abby Lee had eight digs.  and Rebecca Malloy had five. Lora Withers had 10 assists, while Mary Seifert had eight.

• SPC champ Cox Mill lost for the first time on Tuesday when it was swept by North Henderson in the second round of the 3A playoffs.

Carson finishes the regular season at Northwest Cabarrus on Thursday.

Carson’s girls lost 9-0 at Weddington in the second round of the 3A playoffs on Tuesday.

• SPC champ Cox Mill advanced to the third round of the 3A playoffs with a 5-3 win against North Iredell on Tuesday.

• West Davidson  (19-3) defeated Surry Central 5-3 on Tuesday in the second round of the 2A playoffs.

West Davidson plays in the third round at undefeated Lake Norman Charter on Oct. 28.

The AP polls were released on Tuesday.

Top-ranked teams are Richmond County (4A),  Southern Durham (3A), Southwest Onslow (2A) and Wallace-Rose Hill (1A).

Still unbeaten in 1A are Mt. Airy, Wallace-Rose Hill and Robbinsville.

Sixty-eight GARS members played in foursomes at Warrior on Monday.

Abby Saehler had nine kills for the Bulldogs.

Livingstone had CIAA players of the week for the 21-20 win against Shaw.

Kenneth White was the CIAA Linebacker of the Week. He had three tackles for loss and an interception.

CIAA Receiver of the Week Jalen Hendricks had 15 catches for 212 yards and a touchdown.

The Blue Bears are at Winston-Salem State Saturday at 1:30 p.m.

• Washington and Lee inside linebacker John Carrick was named ODAC Defensive Player of the Week.

A sophomore from Charlotte, Carrick helped the Generals get their first victory of the season in a 28-25 win against Randolph-Macon. Carrick had two interceptions in the fourth quarter and made five tackles. Carrick’s interception with seven seconds left sealed victory.

Carrick is the son of former Catawba player Ken Carrick and has family in Salisbury.

Childress’ high school team went 30-1 in 1986, with the only loss coming to eventual  state champ North Rowan in the Western Regional final.

Gary Hahn, voice of the N.C. tate olfpack, was the keynote speaker, while Bob Harris, voice of the Duke Blue Devils, served as master of ceremonies.