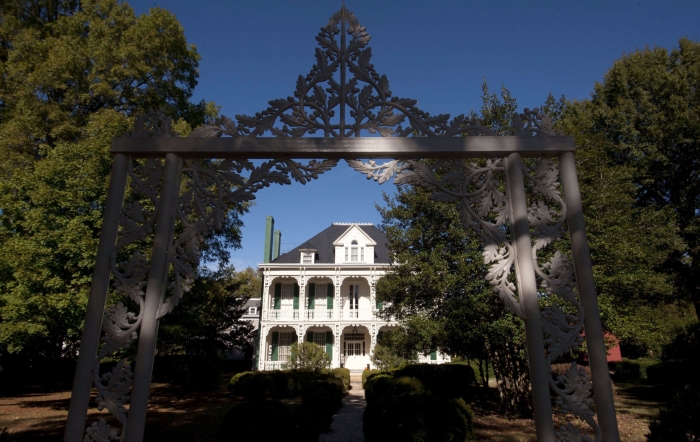 JON C. LAKEY / SALISBURY POST Throughout the month of October, The Historic Salisbury Foundation has been running candlelight tours of the historic 1820 Hall House. The tour gives a deeper look into the lives and deaths of the 4 generations of the Hall family that lived in the home.

SALISBURY — If you’ve ever taken a tour of the Dr. Josephus W. Hall House, it was probably easy to focus on things — the Civil War cannon out front, the slave quarters in back, the decorative cast iron facade and the furnishings inside.

But give a place 194 years of history, and you also have plenty of people associated with it. Historic Salisbury Foundation has been running with that notion and offering special “Life and Death Tours” of the 1820 Hall House Friday and Saturday nights in October.

The Hall House is located at 226 S. Jackson St.

The tour focus is on people — their lives and sometimes their deaths. Various circumstances behind the inhabitants’ stories open the door for tour guides to talk about grim things such as cholera, Southern funeral customs and cemeteries.

“It is not a ghost tour,” says Brian M. Davis, executive director of Historic Salisbury Foundation. “… None of us have had any experiences here, and I’ve been here at all times, day and night.”

The informative candlelit tours — one is offered at 6:30; the other at 8 — definitely give the Hall House a different vibe, maybe fitting for October and the Halloween season.

An interesting cast of characters populate the Hall House story.

Take the slave quarters/kitchen. According to the 1861 Census, nine slaves worked for the Hall family, among them Harriet Cowan, the 47-year-old cook; Lizzie, a 16-year-old “domestic servant”; Nancy, a 10-year-old house servant; and Jefferson, a 32-year-old “day laborer.”

Over more than a century, four generations of the Hall family lived in the main house, and historic Salisbury names such as John Fulton and Maxwell Chambers are closely connected to the property’s earliest history.

Dr. Josephus Hall himself provided his medical expertise at the Salisbury Confederate Prison, as did a son-in-law, and it’s believed Union prisoners sometimes recuperated in the house.

Mary Cowan Hall, second wife of Hall, used a ring to etch her name into the glass of one of the upstairs doors, which open to the balcony. She planted the boxwoods still gracing the Hall House lawn, and it was Mary who admonished Union soldiers for allowing their horses to snack on the boxwoods.

When Union forces used the Hall House as a Salisbury headquarters, the family reportedly was relegated to one room of the grand residence, whose floor plan closely matches the Fulton-Mock-Blackmer House on South Fulton Street.

A portrait of Henrietta Hall, the doctor’s first wife, hangs above a piano in the front parlor. She and a daughter named Josephine died during a cholera outbreak in St. Louis in 1849.

Mildred Seaber, the great-granddaughter of Dr. Hall, was the last member of the Hall family to live in the house. Having sold the house to Historic Salisbury Foundation in 1972, Seaber moved into a Winston-Salem nursing home. She died in 1990, and Mildred had asked that her wake be held in a front parlor of the Hall House.

Historic Salisbury Foundation obliged, and it gives the tour a chance to talk about Southern funeral customs. A touching photo from 1990 shows Seaber’s longtime friend and housekeeper, Martha Gillespie, sitting with Seaber’s casket in the front parlor.

This National Register house was built first as classrooms for the Salisbury Female Academy and operated as such from 1820-25.

Chambers and his half-sister, Rebecca Troy, purchased the property in 1825 and lived here for about 13 years. It was then a rental property until Hall purchased the home in 1859. Hall had returned to his native North Carolina from St. Louis in 1851 with his surviving children, Henrietta and Stockton.

For $117, Hall ordered from St. Louis the cast iron grillwork which is the Hall House’s signature. But it wasn’t installed until after the Civil War.

Hall died at 69 on Dec. 6, 1873; Mary, his second wife, in 1902. They are buried in Chestnut Hill Cemetery, though Josephus Hall originally was buried in the Old English Cemetery off North Church Street.

The family installed “the largest monument of marble ever erected in Salisbury” over his grave in 1886 and enclosed the burial site with an iron fence specially ordered from a company in Kenton, Ohio.

When Mary Hall died in 1902, the monument, fence and Hall’s body were moved to Chestnut Hill to be with her.

The real matriarch of the Hall family turned out to be Hall’s daughter, Henrietta, who married Julius McNeely, Henrietta had five daughters and three sons and lived until 1921.

A daughter, then a granddaughter (Mildred Seaber) followed Henrietta as primary residents of the house.

Historic Salisbury Foundation essentially was founded as an organization when its members worked actively to save the Bell Tower and the Hall House.

Through its history, the house was filled with colorful characters, from gold-prospecting Stockton Hall to domestic servant “Aunt Rachel” in the late 1800s and early 1900s.

But with the stories of people, it’s difficult not to come back to some of the things. The house is filled with treasures, such as the 1859 family Bible and Mary Cowan Hall’s 1865 recipe book, written in her own hand.

And how many houses include on their walls a presidential pardon? President Andrew Johnson signed a pardon for Dr. Hall on May 11, 1866, to mark Hall’s renewed allegiance to the United States and excusing his connection to the Confederate Prison.

“This is about people and their stories,” Davis says.

The Hall House is full of both.