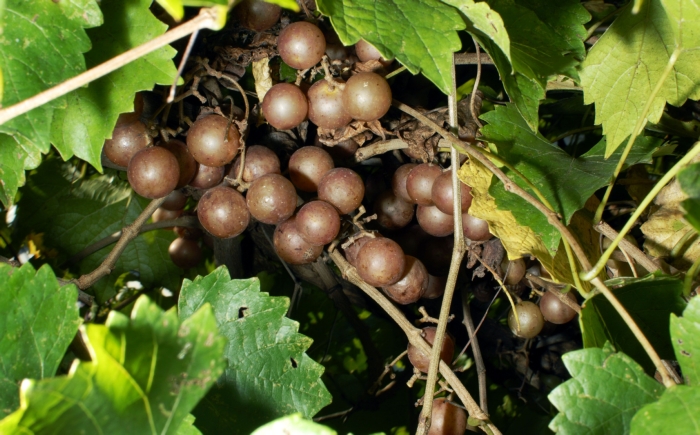 Scuppernongs hang heavy under the leaves of the vine. The bronze colored fruit are scuppernongs and a variety of muscadines. Muscadines are purple or black. photo by Wayne Hinshaw, for the Salisbury POST

I sat down to write a simple column about eating scuppernongs at my Granddad’s when I was in elementary school, and I found I was digging into a vast and complicated subject.

The easy part of the story is:

When in the lower grades in elementary school in Randleman, in the fall of year, after school’s start, I would get off the school bus at Papa and Grandma Hunt’s house to spend the afternoon eating scuppernongs in their back yard near the chicken house. They had an arbor that was about 20 feet by 30 feet. It might not have been that big, but at 6 or 7 years old, it looked big.

You could walk under the shade of the vines and pick the sweet grapes and eat for hours. Grandma, who was not a big fan of scuppernongs, would tell me to not eat so many because they would give me a stomach ache. Papa Hunt would always say to Grandma, “Now Mollie, let him alone. Let him eat. If he eats too many, he will learn a lesson from it and not do it again.” Grandma would reply, “I just don’t want him to go home with a stomach ache.” They had this conversation every day when I stopped to gorge myself with scuppernongs.

When I bought a home in Rowan County in the early 1970s, I dug up a wild scuppernong plant at my dad’s and transplanted it to my back yard. I also purchased a cultivated plant from a nursery. The two plants have coexisted side by side, wrapping their vines around each other for over 40 years, producing sweet fruit every fall. The wild vine has smaller, sweeter fruit than the nursery vine, but both quench my annual craving for that sweet taste.

That could be then end of the story, but I have learned a lot more about scuppernongs and  muscadines.

A scuppernong is the golden bronze variety of a muscadine, which is purple or black. Both grew in the wild in North Carolina.

Now here is my advice on how to eat and enjoy the scuppernongs: You have to stand near or under the vine and pick a bronze berry. Beware of yellow jackets and birds lurking in the vines. They like the grapes also. Watch out for spiders on the berries, and if there is white stuff on the berry, choose another. If you have ever heard the question, “What is the white in bird poop?,” then you know why to leave the berries with white stuff on them.

Point the “belly button” (stem scar) of that berry at your mouth. Enter the belly button into your lips between your front teeth and bite and squeeze at the same time. The insides of the berry (pulp and juice) will squirt into your mouth. Your mind will register, “Umm, good and sweet.” Don’t chew the skin because it is tough and bitter. Toss it on the ground. Now with the insides of that berry deep in your mouth, you can use your tongue to separate the 3-4 seeds from the pulp and spit the seeds out or do like me and swallow them. I have found that the seeds do not digest, but they track their way through your body and out, if you know what I mean.

Scuppernongs and muscadines are rich in  vitamin C, potassium, and vitamin B. They are low in sodium, fat free and have no cholesterol. Studies have shown the grapes have properties that inhibit cancer cells. They may help fight coronary heart disease and inflammatory diseases.

I now must explain the sexuality of scuppernongs. This part is for “adults only” because I will discuss the private parts of a scuppernong. Now all of you are reading this part! You have to have male and female flowers on your vines. You might have a male, female, or a hermaphroditic or “perfect” flower. The “perfect” flowers have both male and female reproductive parts and can pollinate themselves.

Now having examined my vines with a giant magnifying glass in the privacy of my backyard under the cover of the vine, I seek to find the stamen inside the flower. When I find the stamen I see paired anthers that hold yellow pollen powder. It is a male vine.

If there is no stamen, it is a female vine.

Why get so personal with the private parts of a scuppernong vine? If you have a cultivated vine, it will be hermaphroditic and produce “perfect” flowers and self-pollinate. Wild vines are either male or female, so there must be a male and female near each other to produce grapes. The wind does most of the pollination.

There you have it. It is far more information than you ever needed to know to eat and enjoy your bronze scuppernongs or purple or black muscadines.