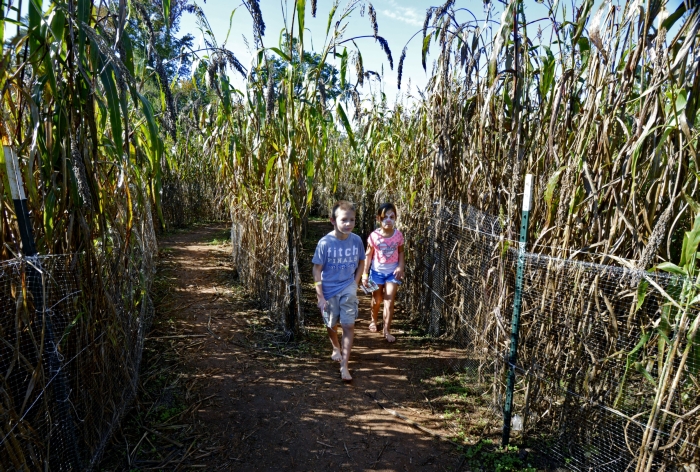 Ten year old Landon Barber and his seven year old sister Grayce wonder their way through the "Get Lost In A Book: Read" Maize at the Patterson Farm "Fall Fun On the Farm" events. photo by Wayne Hinshaw, for the Salisbury Post

MOUNT ULLA — “I think we go this way,” Grayce Barber told her brother, Landon, as the two made their way through the corn maze at Patterson Farm.

It took the two about 30 minutes to wind their way through the bookworm-shaped “Get Lost in a Book-READ” maze, designed to encourage reading and literacy. Along the way they read the story of Spookley and collected “paw” prints that helped them navigate their way out. Grayce, 7, and Landon, 10, along with their mother, Mandy, spent much of Saturday at the Fall Fun on the Farm weekend event.

“It was awesome,” Grayce said after exiting the maze.

She said it was difficult for her, but it was also “great.”

Landon said he also found the maze difficult, also “clever” and “tricky” but fun at the same time.

Sid Albright, who’s been volunteering at the event for more than a decade, stands by to help those who get lost in the maze. He’ll also get them started, if need be, at the first turn.

Grayce and Landon read the story of Spookley, the square pumpkin, as they walked through the maze. To help navigate the twists and turns, the two also collected paw prints of animals — impressions the children made from giant crayons attached to a pole with a metal imprint of an animal’s paw.

The weekend’s activities also included corn hole, face painting, pumpkin checkers and a corn pit where children take off their shoes and frolick in a dried corn pit.

Keith Biehle and his son, Bryce, 12, also tackled the maze. The two have visited Patterson Farm in years past and enjoy the mazes.

The pair decided to tackle American history questions to help find their way out of the maze.

The trip to Patterson Farm is part of the family’s fall tradition. In addition to the maze, they also planned to pick pumpkins, go on a hay ride, try their hand at the tomato cannon and tomato sling shot.

Thompson Sewell. 13, was among a group of family members who decided to visit Patterson Farm Saturday after traveling from Athens, Ga., to celebrate his grandfather’s 70th birthday. One of his favorite activities at the farm was getting to shoot tomatoes from a cannon using compressed air.

He arrived at the farm with his mother, Carrie, his three aunts and uncles, who together had 11 children.

Richard Reamer visited the farm for some father-daughter time with his two girls — Mamie, 4, and Eleanor, 6.

It was his first time at the farm since the girls usually attend with their mother.

Kristen Brawley began what would be her family’s farm tradition last year when her son, Braylen, was a few months old. He’s now 23 months old.

This is the third year Patterson Farm has incorporated the maze, said Michelle Patterson.

“Each year we try to come up with something creative,” she said.

Patterson Farm wanted to partner with the Rowan-Salisbury School System and use the event to promote literacy.

“I think it’s a great family outing that people can come out and enjoy,” Patterson said.

She acknowledged that many families make Patterson Farm part of their fall tradition.

The maze, which is 2.5 acres, was created by a company that designs the maze and then cuts and shapes the trails.

To help navigate their way through the maze, participants can choose to follow a “passport” that gives clues using multiple-choice questions based on different subjects, including history, books series like the Hunger Games and other topics. An A, B, C or D answer will lead the traveler on a left or right turn. The correct turns will lead individuals out of the maze. Another option through the maze is to follow the Spookley story. Spookley is a square pumpkin who gets teased because he’s not round like the other pumpkins. He’s shown kindness by three spiders and in turn shows kindness to those who made fun of him. Spookley story boards are scattered throughout the maze, which is actually made of sorghum, not corn.

Sorghum looks similar to corn but doesn’t have cobs on it. One of the reasons sorghum is used instead of corn, Patterson said, is because it is more heat tolerant.

Fall Fun on the Farm continues next weekend, Saturday, Oct. 25, and Sunday, Oct. 26.

This is the first year for the run, which will take place at 5 p.m., Saturday, Nov. 1. The run, which is sponsored by Patterson Farm and Rowan-Salisbury School System, follows a 3.1 mile course. Tickets are $10 in advance and $15 on race day. A little Dewey Color Run for ages 10 and younger will begin at 4:30 p.m. The children’s run is half a mile.

The day’s events begin before the race at 10 a.m. with a scavenger hunt, corn maze, fall activities, a pumpkin smash and book giveaway. A bonfire, S’mores and flashlight maze will be held after the race.

This event will take place from 6 p.m.-10 p.m., Saturday, Nov. 8. The event proceeds will benefit the South and West Rowan Relay for Life. The fee for elementary age students is $5, and $10 for all others. Children 4 years old and younger can enter free with a paying adult. Attendees can enjoy the flashlight maze, hay rides, fireside S’mores and a movie on the lawn. The movie, “Dispicable Me 2,” will start at 7 p.m.

The first race begins at 9 a.m., Saturday, Nov. 8. The proceeds benefit the Rowan County United Way. The entry fees are $35 per person by Nov. 5 and $40 per person after Nov. 5. Participants may register as individuals, two-person teams or four-person teams. The race is 3.8 miles through farmland, vineyards, the corn maze and other farm obstacles. The Little Farm Hands Adventure Run is a half-mile course for children 12 years old and younger. Children will run around a portion of the farm, through the barn and make their way past several obstacles. The cost is $35 per person. Registration is from 7-8:30 a.m. for individuals and 7-9:30 a.m. for teams.

For more information about these and other activities visit www.pattersonfarminc.com.