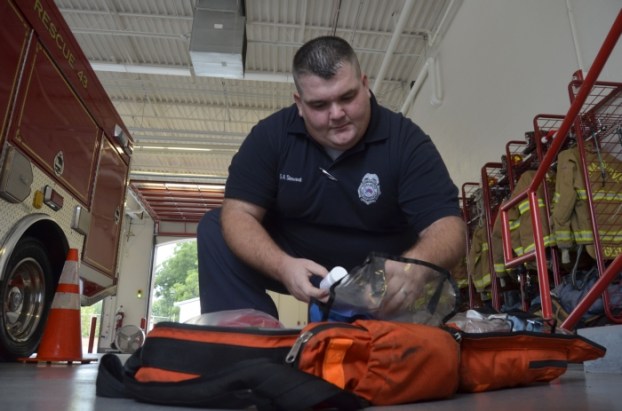 George Stewart checks his medic bag to make sure all of the equipment is in working order. Stewart works full-time for China Grove Fire Department, but is also part-time with Rockwell Rural Fire Department, Rowan EMS and works part-time at the Charlotte Motor Speedway. He was named Medical Responder of the Year this spring. Shavonne Potts/Salisbury Post

Medical Responder of the Year George Stewart dedicated to jobs as EMT, firefighter

George Stewart wears many hats — firefighter, EMT, husband, and earlier this year he added another: Medical Responder of the Year.

“I’ve wanted to be a firefighter since I was a little kid,” he said.

While he was in first grade, his class took a tour of the Concord Fire Department, and after that moment, Stewart knew that’s what he wanted to do with his life.

In the spring, Stewart was given the Rufus Honeycutt Jr. Award, which recognizes a county medical responder who has made a significant contribution to the EMS system in the previous year.

The award is given during the annual picnic at Dan Nicholas Park and is based on a peer review process. It’s named after the late Rufus Honeycutt, who served as a county commissioner and created the county EMS service in the mid-1980s.

“He’s very committed and dedicated to the profession. He’s helped out a lot of times and stepped up to the plate to fill in if we have someone call out sick,” said EMS Battalion Chief Bill Hamrick.

Hamrick said Stewart “always has a good attitude about him and is very focused on the job.”

When Stewart isn’t rushing to a fire or tending to a patient as an emergency medical technician, he’s conducting fire prevention tours at local schools.

How does he do it all? He’s at the China Grove Fire Department every third day for a 24-hour shift and then he has 48 hours off.

He typically starts work in China Grove around 8 a.m., works at Rowan EMS around 7:45 or 8 p.m. and at Speedway events until the crews close up shop, which Stewart said can sometimes be very early the next morning.

“I love coming to work every day,” he said.

The various stations are good at working with his schedule, he said.

His uncle is a retired federal agent with the Bureau of Alcohol, Tobacco, Firearms and Explosives (ATF).

Boosting Rowan County’s economy is undoubtedly the top issue in the 2014 county commissioner race, but with an unprecedented field... read more