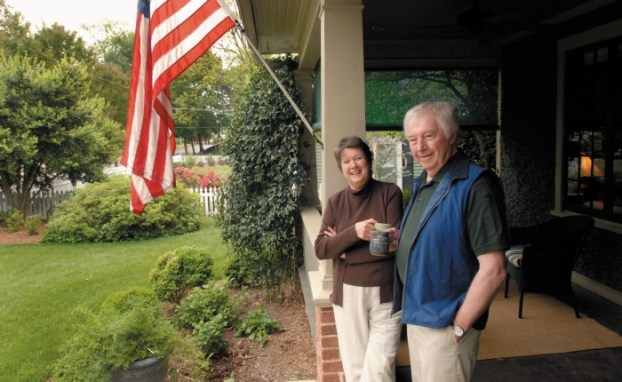 Jean and Foster Owen pose for a photograph on the front porch of the their home on West Horah Street in Salisbury. Photo by Jon C. Lakey, Salisbury Post.

Wineka column: Foster Owen had many passions, but he usually started with music

ALISBURY — Many days when I climb into my truck, an old Ford that needs some paint, I think of J. Foster Owen.

It was this same kind of boxy, blue, seen-better-days pickup Foster relied on to haul things for his many projects, most of them dealing with the ongoing restoration of his 1903 South Fulton Street house.

On a late February day in 1981, I asked Foster if he would mind helping me remove the dead Christmas tree from my front living room, load it onto his truck and drive me over to Caldwell Street.

I was supposed to attend a “tacky party” that evening, and I couldn’t think of anything tackier than a dead Christmas tree in late February.

The affable Foster Owen never blinked. We hauled the tree over to the house being rented by a girl I was sort of infatuated with, and I can still see Foster smiling and waving as he drove away, leaving me to sweet talk.

I married that girl, and I often wonder whether Foster knew then his truck and that dead Christmas tree held the passport to my future happiness.

It was how his daughter Susan Atkinson described him Friday afternoon at Owen’s memorial service at First Presbyterian Church.

Her father, she said, was “a born networker.”

Owen spoke with a rich baritone voice. His eyes twinkled, and he often dipped his chin before that deep voice came out.

It was a voice I often tried to imitate, but I could never master the optimism it contained.

Joshua Foster Owen died in Chapel Hill June 11 after a quick and merciful bout with brain cancer. Earlier in the spring, he and Jean had just finished restoration of her family’s 1837 farmhouse in New Jersey and enjoyed a beautiful sunset together.

But Jean knew something was wrong when Foster didn’t drink his coffee the next morning.

They traveled back to North Carolina, where there were tests, the diagnosis of brain cancer, more tests and the sobering prognosis that he wasn’t going to make it.

Only Foster Owen could turn that kind of news into a tender moment. “Well, I don’t think there’s much choice,” he said, and it was sort of his blessing, his benediction, delivered to Jean and their daughters, Susan and Kate.

They knew how rich their lives had been together. They knew they had few regrets. Jean felt stronger and empowered to take care of things.

Folks who know Foster Owen are not surprised at this. Over 31 years in Salisbury city government, he was pretty much the behind-the-scenes, go-to guy.

He retired in 2002 as longtime assistant city manager, but he had worn virtually every hat in city government. He filled in as interim city manager. He stepped in to head several different departments until new directors could be hired. He served as personnel director and treasurer.

Owen oversaw construction projects, such as the City Hall on South Main Street. He managed city properties, such as The Plaza. He organized council retreats, many of which I rode with him to attend.

But there were several other sides to Owen. The side in love with historic preservation. The side enchanted with the arts. And most of all, the side engrossed in music.

I surely will leave out an instrument or two here, but Foster could play the banjo, tuba, trombone, recorder and guitars.

As a banjo player, he often wore a red vest and a signature straw hat, tilted to reveal his bushy hair. He sang with the Fulton Street Five, the Polkas Dots, the Senior Class Barbershop Quartet and the St. John’s Men’s Chorus.

He played with Resurrection Brass, which started Friday’s service with its version of “Lift High the Cross” — the way it should be played — triumphantly. A chair was left empty in the ensemble in Owen’s honor.

Owen could sit on the porch on South Fulton Street, play his banjo or horn and soon draw a crowd.

Both Kluttz mayors — Margaret and Susan — witnessed Owen in action at City Hall. With his pinstripe suit and a notepad in hand, he seemed to make impossible work assignments possible, Margaret Kluttz said.

He had a way of making people look good, inspiring them and helping them grow professionally and personally, she added.

Susan Atkinson said her father always convinced her and others to make it work — that they already had all the tools they needed to make things happen.

Kate Williams said her father was driven to leave things better than he found them.

George Kluttz, Don Sayers and Owen had a knack in investing in things such as old Checker cabs, boats and pickups. There usually was some fun involved, but always negative financial returns, Margaret Kluttz said.

Nights with friends in the Owens’ renovated horse barn apparently were legendary, as were the Saturday morning breakfast clubs.

To a whole generation of kids in the West Square Historic District, Owen was the Santa Claus — “Foster Claus” —  who visited their homes each season.

Foster just made you feel more comfortable. He was a fixture — in the West Square, in the downtown, at City Hall.

Foster and Jean Owen moved to the Carol Woods retirement community in Chapel Hill about six years ago, but they always were coming back to Salisbury, especially for theater productions and events such as Pops at the Post.

As you might expect, Foster immediately began playing and singing with the Carol Woods Jazz Ensemble, Franklin Street Jazz and Decatur Street Beat.

He and Jean also were mentors to first-year medical students at the University of North Carolina.

I forgot to mention Foster and Jean Owen were my landlords when I first moved to Salisbury as a young, wild reporter. I can’t adequately describe the kindness they showed me, and Jean promised again Friday she will hold onto some of the incriminating stories she has on me until I am out of the newspaper business.

I lived with two other people in the Snider House, restored by Foster and Jean with the Smithermans. When they decided to convert it to a single-family residence, Foster called me over to the “big house” one day and, not wanting to leave me homeless, said he and Jean were thinking about renovating the old embalming room of their former funeral home into an apartment.

Would I be interested in being the first tenant?

By then, I was sure I’d be marrying the girl on Caldwell Street, so I broke that news, and we spent the afternoon talking about who knows what.

But I bet it started with music. When Foster’s memorial service ended Friday, the crowd left to horns playing “When the Saints Go Marching In.”

I secretly sang along in my best Foster Owen voice, optimistically.

Qadirah promises Blues and Jazz Festival is coming back — next spring

SALISBURY — Eleanor Qadirah just couldn’t live without it. After a one-year absence, Qadirah intends to bring back the Rowan... read more