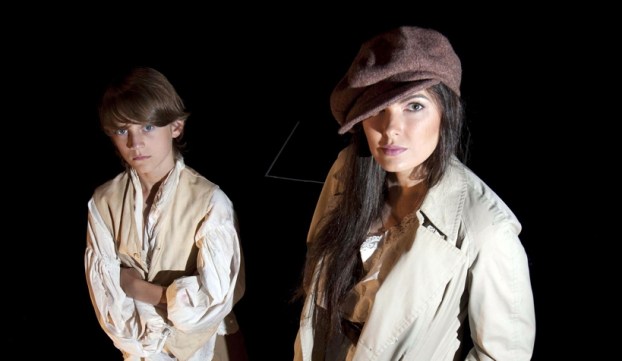 JON C. LAKEY / SALISBURY POST Salisbury's Owen Teague (left) will play the part of Gavroche and Amy Seagle will play Eponine. A large cast has been set for the upcoming performance of Les Miserables by the Piedmont Players Theater. PPT will have a change of venue from their normal downtown Salisbury location to Keppel Auditorium on the Catawba College campus. A cast of 150 players will bring alive the musical based on French historical novel by Victor Hugo, first published in 1862, that is considered one of the greatest novels of the 19th century Monday, October 6, 2014, in Salisbury, N.C.

The collaboration of Piedmont Players and the Salisbury Symphony with “Les Miserables” is an audience-pleasing success. The opening night crowd was on their feet, whistling and cheering by the end of the three-hour concert production.

Standouts in a huge cast are, of course, Neil Shepherd as Jean Valjean. Shepherd is a big man, with an impressive vocal range that allows him to shine when he begs God to let Marius live after he is wounded in the first battles of the French Revolution. Even Shepherd had tears in his eyes.

Marius, played by Alex Yost, is handsome and dashing, with a soft and gentle edge that draws young Eponine (Amy Seagle) to him. His true love, Cosette, is played by Laura Raynor with a sweet voice and suitably sympathetic personality.

And Jenny Carroll, a long-time Piedmont Player, handles “I Dreamed a Dream” beautifully.

There are plenty of good voices in the huge ensemble cast and the enormous chorus. It was hard to believe all those people could fit on the stage of Keppel Auditorium at Catawba College, but somehow, they did. David Hagy conducted the orchestra with his usual flair and produced the dramatic music that underlies the entire show.

Artist Mark Stephenson plays the dour and strangely evil Javert, the man who will never stop hunting down Jean Valjean for stealing that loaf of bread. Stephenson is a commanding and slightly threatening presence, as he should be. The other bad guys are Thenardier and his wife, Andy Abramson and Robing Rogers, who oil up the stage with the grease of their greed.

The ensemble of young freedom fighters belts out rousing songs to urge the people to fight for their rights. Another standout is Paul Reeves Leopard as Enjolras, bravely leading his comrades into battle.

With direction by Reid Leonard of Piedmont Players and choreography by Tod A. Kubo, you’ll see a total package.

There’s too much talent to name them all here, but it is obviously a group effort. Everyone had to do their jobs, take their cues, move their bodies, stay in character and sing their hearts out.

“Les Miserables” is one of the most popular musicals of all time, and audience response shows why. People love the story of a poor man doing good and battling the forces of evil. Even the balcony of Keppel looked full on opening night.

There are just two more performances of this show by Alain Boublil and Claude-Michele Schonberg, which was adapted from Victor Hugo’s classic novel. Saturday night’s performance is at 7:30 and Sunday’s matinee is at 2:30 p.m. Tickets range from $10-$35 and are available at piedmontplayers.com, 704-633-5471.

Novant Health is the presenting sponsor. Partner sponsors include The Post Group, Traci and Brad Williams and F&M Bank.

What is IPM? What if I told you that it is one of the most beneficial tools a gardener or... read more