First US Ebola victim has remembrance ceremony in Salisbury 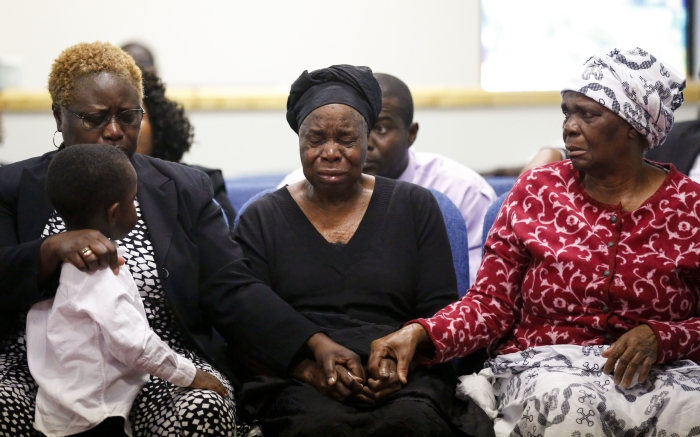 Thomas Eric Duncan was remembered here Saturday as a big-hearted and compassionate man whose virtues may have led to his infection with Ebola in his native Liberia and subsequent death as the first victim of the disease in the United States.

Family and friends gathered at Rowan International Church on Lee Street in Salisbury with a primarily Liberian flock near where Duncan’s mother and other family members live.

Duncan’s neighbors in Liberia believe he was infected by helping a pregnant woman who later died from Ebola. It was unclear if he knew about her diagnosis before traveling to the United States. Duncan denied helping his Ebola-sickened neighbor, but it would be consistent with the caring nature he always showed, said his nephew Josephus Weeks of Kannapolis.

“There’s no doubt in my mind that what’s described in the news is something that Eric would do,” said Weeks, who like Duncan is 42 and grew up in the same households as his uncle. “Eric would have been out there and helped that woman. And he would have done everything that he needed to do for that woman to make sure she was fine.”

“People would go there without any money and appeal to him, and he was willing to give them time to talk to their people. There were some people who paid and some people who didn’t pay,” Kulah said. “He was such a compassionate young man, respectful young man.”

About 40 friends and family members — many women wearing colorful headscarves — collected inside the 100-seat church and listened as speakers remembered Duncan accompanied by an electric piano and bongos. His weeping mother sat in the front row. Weeks’ 3-year-old son dabbed at the elderly woman’s teary eyes with a tissue.

Duncan left Ivory Coast and learned auto mechanics and welding at a United Nations school for refugees in Ghana, relatives said. He came to the United States hoping to work multiple jobs, save money and build a future, said his relative, Harry Korkoya of Woodbridge, Va.

Duncan is also survived by four children, none of whom could attend the memorial service, Weeks said.  The four people living in the Dallas apartment where Duncan stayed after arriving in the United States are due to leave quarantine next week after the end of a 21-day incubation period.

Weeks remembered the Duncan he last saw 22 years ago as an athletic youth who was their neighborhood’s best at soccer played with a tennis ball, the only kind available. He drove motorcycles so fast it scared Weeks, and named their pet dog Superstar to reflect the pride he had in the animal. Duncan commonly gave away money, then asked Weeks for a loan, he said.

“He cared for everybody, it doesn’t matter who you were. If he was driving he saw you over there, he wouldn’t splash you with dirty water. He’d pull over and let you in his car,” Weeks said.