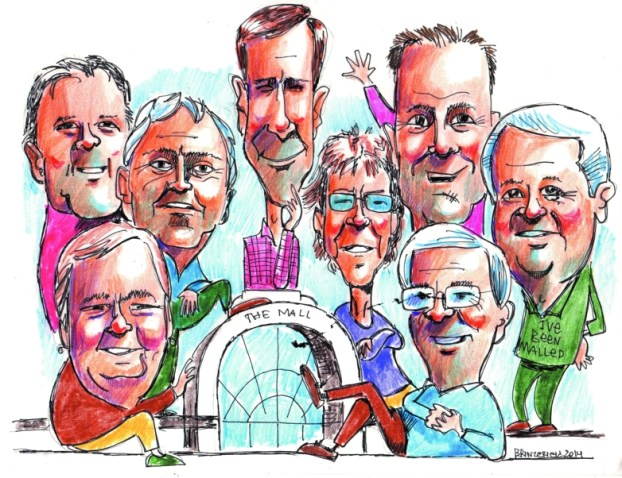 Boosting Rowan County’s economy is undoubtedly the top issue in the 2014 county commissioner race, but with an unprecedented field of candidates, the former Salisbury Mall and bickering between elected officials have quickly made their way to the forefront.

The field of candidates includes three Republicans — Greg Edds, Jim Greene and Judy Klusman;  two Democrats — Leda Belk and Rick Locklear; and three unaffiliated candidates — Chris Cohen, Raymond Coltrain and Gene Miller. Despite their current independent status, the three unaffiliated candidates have previously run for county commission with a political affiliation. Coltrain ran unsuccessfully in 2006 and successfully in 2008, both times as a Democrat. Miller and Cohen have both run as Republicans previously.

“To be perfectly frank, I think the number of unaffiliated candidates is the great unknown,” Bitzer said. “I’ve talked to folks on both sides of the political aisle and they’ve never seen anything like this. I think it’s totally up in the air.”

The only candidates to participate in a primary were Republicans. Greene garnered 20 percent of the vote, Edds received 16 percent and Klusman got 13 percent.

Edds, 51, runs a State Farm insurance agency in Salisbury and is a former county Republican Party chairman. Edds says his first and only priority if elected would be on boosting Rowan’s economy. During Thursday’s forum, he talked extensively about economic development, saying schools and county government should work in collaboration to provide a well-trained workforce to employers.

Edds’ stance on the former Salisbury Mall is that county commissioners should wait until a space needs study comes in before making decisions and not choose an extreme measure like selling it or developing it at any cost. Edds says a county-owned water system could be an economic development tool, but the county and city should work together on it.

Greene, 66, runs an insurance agency in Salisbury and is a member of the economic development board. Greene says creating an atmosphere that supports new business would be his first and only priority if elected.

Greene’s stance on the former Salisbury Mall is that government should not be in competition with private business and the county should figure out a firm plan for the property. During Thursday’s forum, possibilities he mentioned for the former mall included tearing it down and creating a sports complex or new Knox Middle School. He also mentioned selling the mall. A county-owned water system would help with economic development and turn unproductive land into something viable, he said.

Klusman, 57, is originally from Wisconsin and is a former member of the Wisconsin State Legislature. She said the county’s decision to purchase the former Salisbury Mall was a primary reason for her candidacy, but described her priorities as one big circle that includes education, jobs and poverty.

Her stance on the former Salisbury Mall is that the county should have drafted a plan before purchasing the mall and should “do our due diligence.” During Thursday’s forum she said that one problem with the mall purchase was that the previous owner didn’t allow the county to tour the facility before the purchase. However, county commissioners did tour the mall in September 2013 in a closed session and purchased it in December.

In a previous interview with the Salisbury Post, Klusman said she hadn’t done extensive research about a countywide water system and described it as another idea that county commissioners hadn’t thoroughly thought out.”

Belk, 68, is semi-retired, as she often works as a substitute teacher at Salisbury High. She previously worked in law enforcement, education and is a former county commissioner. Her top priorities include ensuring adequate financing of county schools and county departments.

Belk’s stance on the mall is that the county should have a plan and enough facts to make an informed decision before deciding on the mall’s future. During Thursday’s forum, she mentioned that Rowan County government needs to work with the city of Salisbury to determine the mall’s future.

Belk says a county-owned water system could be an economic development tool, but a previous feasibility study about the project, when Belk was a commissioner, found the system to be too expensive.

Locklear, 58, is a lawyer with an office in Landis, and serves as the Landis town attorney. Locklear lists good, effective government and jobs as his two top priorities if elected.

Locklear’s biggest concern with the former mall’s purchase was that money came out of the county’s fund balance, partially used as a savings account. He suggested during Thursday’s forum that the county create a committee of Rowan residents and business owners to determine the future of the mall.

In a previous interview with the Salisbury Post, Locklear said too many questions remain at this point about a county-owned water system; at this point, the said, it’s likely not feasible.

Cohen, 57, is the owner of a construction company in Rowan County and a private investor. When asked about his priorities, Cohen described several ways to use Interstate 85 as a tool for economic growth. One idea he proposed is service roads down each side of the interstate.

Unlike many of the other candidates, Cohen said the mall purchase was a good idea because of the low per-square-foot cost. He was the only candidate not to sign a letter that was drafted by local political group La Resistance. The letter stated that the candidates who signed the letter were opposed to the county appealing a special use permit denial. He says the county could make a good use of the mall.

Cohen’s opinion on a county-owned water system is that voters should pass it in a bond referendum, but he’s OK with a feasibility study.

Coltrain, 65, is a private agriculture consultant but previously was the Piedmont Research Station superintendent. Coltrain said that by working cooperatively, Rowan County and its municipalities could foster a better environment for businesses to create jobs. Though,Coltrain said he could only make two promises — to work hard and to share reasons behind his decisions.

His stance on the mall is that the county should use it in the most effective and efficient way. Coltrain said the county shouldn’t be confrontational in making its decision and should take its time in deciding the mall’s future.

He said there’s no problem with Rowan County conducting a feasibility study for a water system, but that it should engage the City of Salisbury in discussions about creating a county-owned system.

Miller, 67, now retired, formerly worked as an assistant superintendent in the Rowan-Salisbury School System and in the banking industry. Miller said his top priority is to help Rowan’s economy by making it an attractive place to live and do business. He said during Thursday’s forum that businesses rely on county government to create a friendly environment, which requires county leaders to look past differences and work out solutions.

He said the county paid too much and that the entire story of the mall has been a folly from the start. During Thursday’s forum, Miller said he is open to suggestions about the mall’s future if elected.

Miller says a county-owned water system could be a good idea, but the City of Salisbury should be involved in the process.

The winners in the election will be sworn in Dec. 1, filling seats now held by Jon Barber, Chad Mitchell and Jim Sides. The new commissioners will serve with Mike Caskey and Craig Pierce, who are up for re-election in 2016.

As three Rowan County commissioners’ terms expire in December, they could have the ability to purchase county equipment and retain... read more