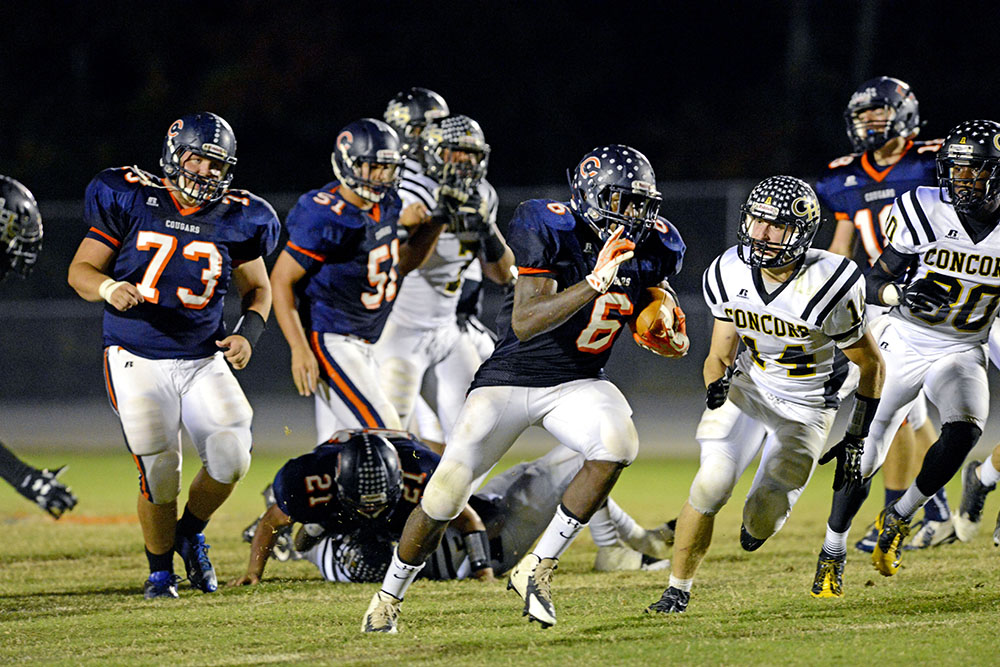 The Cougars spent most of their game with visiting Concord trading jabs and shots to the midsection before dropping a 35-26 decision.

“It was almost like a championship boxing match,” coach Joe Pinyan said. “It went 15 rounds and we hung in for 14. We had a good team on the ropes. We’ve just got to get that last round in there.”

Carson (3-5, 2-3 SPC) rushed for 340 yards against the league-leading Spiders, but a pair of red-zone turnovers proved costly. The first came late in the first half when quarterback Andy Lear fumbled at the Concord 9 and the second with 4:53 remaining in the game when Brandon Sloop had the ball stripped away as he approached the end zone.

“The little mistakes we made were a big factor,” Carson running back Darren Isom said after rushing for 221 yards and all four Cougar touchdowns. “We put our all into it. But mistakes cost us the game.”

They usually do — especially against powerhouses like Concord (8-0, 6-0 SPC). The Spiders unleashed Tennessee-bound running back Rocky Reid for 227 yards and four TDs, including the game-clincher in the fourth quarter.

“Rocky keeps doing it, but this was hard-earned tonight,” said Concord coach Glen Padgett. “Defensively, they’re a very difficult team to block and run against. They have no tendencies, no patterns. I mean, Rocky knows he’s gonna face eight- and nine-man fronts all the time. But Carson did lots of stunting, lots of pinching, lots of angles.”

Reid summoned his inner Barry Sanders and landed a couple of haymakers in the first quarter. On his first carry, he barrelled 51 yards down the right side, setting up Concord’s first score. Four minutes later he took a handoff from quarterback Keenan Black and motored 86 yards for a touchdown that gave the Spiders a 14-7 lead.

“It’s like a chess match with him,” said Carson linebacker Anthony McCurry. “You never know if he’s going to try to juke you out with finesse or run you over. You have to be ready for anything.”

Carson clearly was. It tied the score 14-14 when Isom — the county leader with 20 touchdowns — scored on a 22-yard run with 8:28 remaining in the half. The 220-pound senior bulldozed into the Concord secondary and scored standing up.

“I play every game with all I’ve got,” said Isom. “But something about this game made me want to play even harder. They’re a tough school and you know you have to bring more effort.”

Isom was complemented by Sloop, who carried 23 times for 123 yards.

“When he wasn’t running hard for us,” Pinyan said, “he was blocking for Isom.”

Carson never led but inched within 21-20 when Isom walked into the end zone from 25 yards out in the third quarter. His final TD trimmed the Cougars’ deficit to 28-26 early in the fourth quarter — and a botched two-point conversion attempt kept the host from pulling even.

Carson trailed by nine points and was threatening with five minutes to play when the game was interrupted by a stray dog that wandered onto the field. One snap later Concord’s Carter Mozingo recovered a fumble in his own end zone.

“They made it hard for us,” Reid said. “They’re a pretty tough team. They’ve just got to keep doing what they’re doing.”