Wineka column: ‘The Honey Doctor’ believes in its healing powers 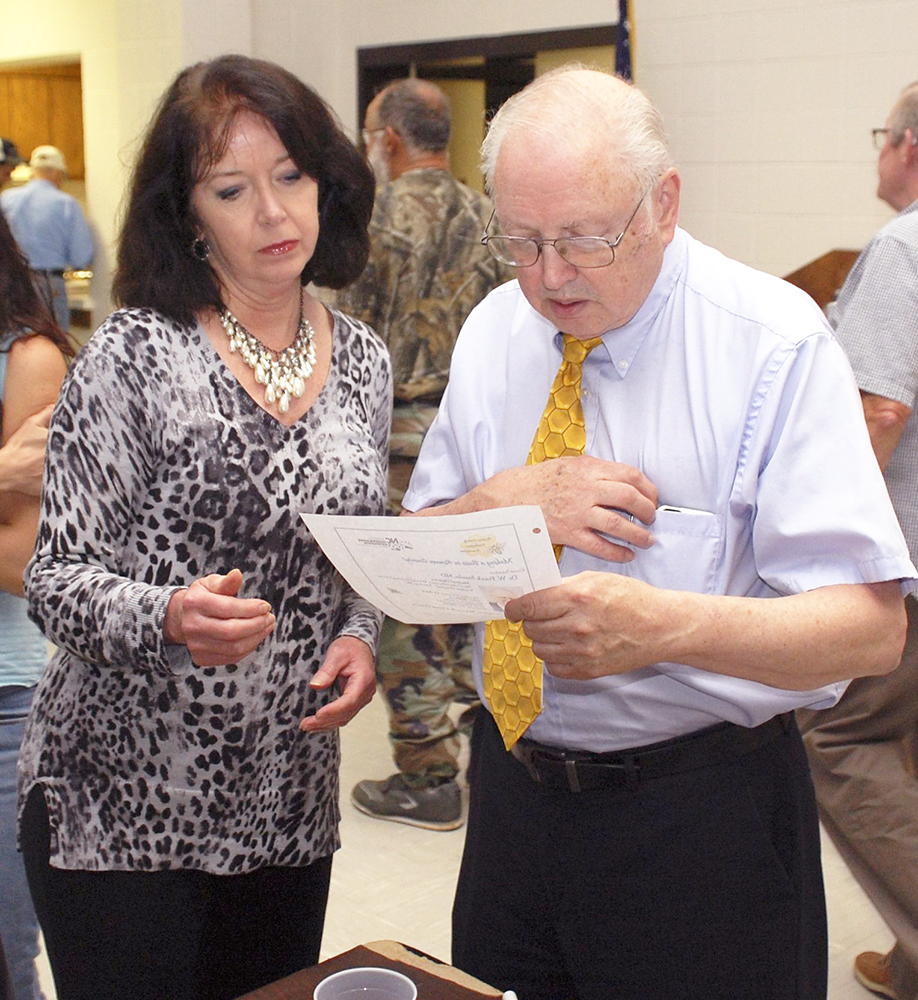 SALISBURY — Dr. W. Frank Steele said he “kind of stumbled” on honey as a treatment option for wounds.

Now he’s known in some circles as “The Honey Doctor.”

“I knew you people worked with some magical little critters,” he told a meeting of the Rowan County Beekeepers Association Monday night. “I didn’t know the honey was as magical until 2002.”

That year, Steele received a call from a nursing home where a diabetic patient had areas on his foot that were ulcerated and in danger of rotting away.

The patient had a bad heart, He was on daily dialysis. He already had lost his left leg to diabetes, and he had been on antibiotics for his right foot for an extended period of time.

The patient wanted to know whether the polarized light therapy Steele was using at the Comprehensive Wound Healing Center in Valdese might work on his foot.

Steele, a surgeon and medical director of the center, said it wouldn’t hurt to try. The polarized light sometimes helped with inflammation and pain, and by using it, a new ulcer on the man’s foot disappeared, and there was some overall improvement.

But several months later, the foot had a gaping wound and was inflamed again to a fire-engine red color.

MRSA bacteria was present, and infection had reached the bone. Steele brought up the real possibility the foot would have to be amputated.

As a last resort, the patient, who was a retired physician, asked whether Steele might try using honey on the problem wound. Steele had heard of honey’s use, going back thousands of years, but it never had been a treatment he considered or one he had been taught.

“He didn’t have anything else to grasp at,” Steele said. “If he hadn’t been a doctor, I would not have paid attention to him.”

But Steele decided it was the doctor’s foot and the doctor’s crisis. He applied some liquid sourwood honey to the foot, making sure it reached into the gaping, blackish hole already exposing tendon and bone.

The honey worked. In two-and-a-half months, the redness disappeared and the hole in the patient’s foot completely healed and closed.

“I couldn’t believe it,” Steele said. “Neither could anyone else who saw it.”

The man lived another five years and never lost the foot.

Since then, Steele and other doctors at his center at Valdese Hospital routinely use honey in the treatment of wounds.

Back when he first used the honey, Steele acknowledged, he was thinking about retirement.

“This is why I’m still working,” he said.

Steele spent much of his presentation Monday showing slides of past patients whose foot, ankle and shin wounds were treated successfully with honey.

At times, the pictures could be gruesome, and the audience members probably thought the wounds Steele was showing could never heal, with any kind of treatment.

But honey proved to be the healing agent that often worked best.

In the simplest explanation, honey dehydrates germ cells, and without water, those germs die.

According to the website “World Wide Wounds,” honey was used to treat infected wounds “as long ago as 2,000 years before bacteria were discovered to be the cause of infection.”

“In c. 50 AD,” the website continues, “Dioscorides described honey as being good ‘for all rotten and hollow ulcers.’ More recently, honey has been reported to have an inhibitory effect to around 60 species of bacteria …”

Two kinds of honey are generally recognized as the best for wound treatment: manuka honey from New Zealand and sourwood honey.

Steele says the honey must be in liquid form and 100 percent raw — the kind often available at a local farmers market.

Much of the honey sold in grocery stores is only 25 percent honey, Steele said. At the hospital, he uses the Federal Drug Administration-approved Medihoney. Steele most commonly applies medical-grade honey to a wound twice a week, sometimes only once a week.

“Honey sticks around for a pretty good while,” he says. “… It’s got to be in contact with the germ, or the germ is going to win.”

When honey is able to kill the first-generation germs in a wound and antibiotics help with the second generation, the body is allowed to do some amazing stuff in getting things to heal, Steele said.

Steele said honey stings on application because the germs are screaming and in the process of dehydrating and dying.

Steele majored in zoology at Duke University and graduated from medical school at the University of North Carolina at Chapel Hill. He has been a surgeon since 1966.

Steele’s whole treatment philosophy started changing in 2000, when he first noticed improvements in some patients’ wounds with the use of polarized light — light reflected off a mirror at a 56-degree angle.

Steele says polarized light can best be described as “energy with a rhythm.” European countries have been using Bioptron polarized light therapy for years, and “I think people are catching on here,” Steele said.

He also relies on hyperbaric chambers for wound treatment with oxygen and, of course, the use of honey.

Steele said he once treated a woman patient who had been bedridden for five months. The tendon infections on the back of her ankles reached all the way to her Achilles’ heel.

A surgeon told her the best option would be amputation of both legs. Second and third surgeons who were consulted reached the same conclusion.

“That’s the principle they all had been taught,” Steele said.

Steele recommended treatments of her infections with honey, and within four months, both legs had healed.

The woman went from a nursing home to someone who is walking and driving a car today. Steele said she called him once just to let him know she was out shopping.

“I just stumbled onto this,” Steele said of his “Honey Doctor” legacy, “but I pass it on.”