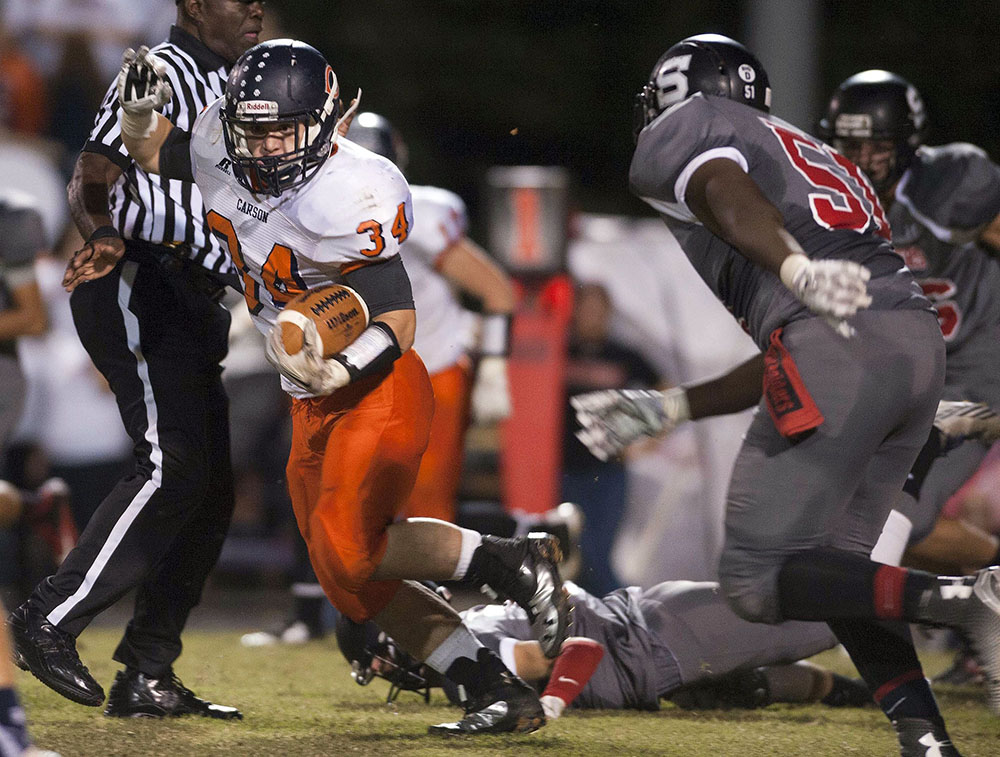 CHINA GROVE — Dynamic Duo. Thunder and Lightning. Double Trouble. Any of those cliches can be used to describe Carson running backs Brandon Sloop and Darren Isom.

Here’s what you need to know if you don’t already. Sloop prefers to work between the tackles. Isom is more apt to make the big plays in open space. Whatever is said to describe them, it can’t be said that it doesn’t work.

“I love it because we’re complete opposites,” Sloop said. “I like to run hard and pick up four or five [yards], and Darren is a big playmaker. We can switch back and forth based on which you need at the right time. Darren makes big plays with 10 seconds left where I’ll try to move the ball down the field.”

Isom said, “Combined, I wouldn’t say unstoppable, but it’s pretty hard to bring us down because I block for him, he blocks for me, the offensive line blocks, we get plays, score touchdowns. That’s the game.”

An example of that can be found just seven days ago in Landis. Carson defeated South Rowan 36-13 last Friday. On its way to a victory, the offense racked up 390 rushing yards. That’s more than twice the amount the Raiders — owners of the second-best run defense in Rowan County — allowed to any opponent this season.

Basically, it was another Sloop-and-Isom type of night. Carson’s backfield tandem combined for 251 yards on 35 attempts and three rushing touchdowns.

Sloop maintained his spot as the leading rusher in Rowan County after his 151-yard night at South Rowan. The 5-foot-9, 192-pound senior — who has more than 4,000 career rushing yards — leads Rowan County in rushing with 136.6 yards per game.

Isom is not far behind. The 6-foot-2, 200-pound senior is good for 114.4 yards per game, fourth among Rowan County ball carriers.

“It’s pretty easy play calling,” Carson coach Joe Pinyan said. “You give it to one of those two, and you feel like you’re going to make yards.”

“We always call each other ‘cousin’ even though we’re not related. We’re just like family,” Isom said. “It’s like a closer bond. I block for you. You block for me. Even if you miss a block, we’ll still block for each other no matter what.”

Both said laying a good block for the other feels like scoring a touchdown.

“I’m just glad they’re both on our side, and we’re not playing against them,” Pinyan said.

This week, the Cougars take on league-leading Concord in a critical South Piedmont Conference game for both teams. Carson (3-4, 2-2) is trying to earn a wildcard berth for the upcoming state playoffs. Concord (7-0, 5-0) is trying to stay unbeaten and out in front for a conference title.

The advantage swings to the visitor though. The Cougars’ run defense allows 171.6 rushing yards per game, and the Spiders have running back Rocky Reid, a running back committed to Tennessee. Regardless of what happens with the defense, Sloop and Isom will likely have an impact on the game in one way or another. If the Spiders shut them down, that doesn’t bode well for the Cougars. If they can get going, anything can happen for the Cougars.

Common Sense: Back to Mount Ulla