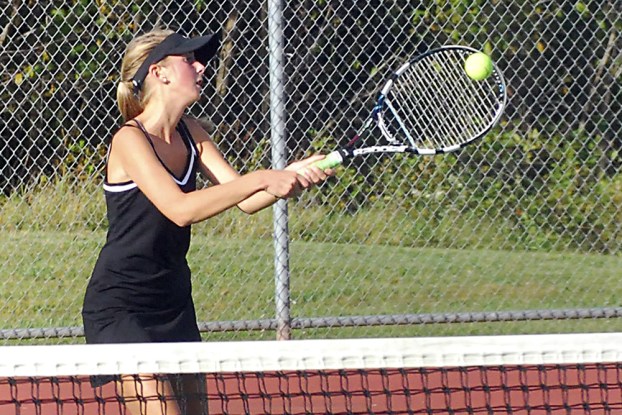 Salisbury tennis sets high bar when it comes to postseason

SALISBURY — Taking care of business is exactly what Salisbury did Wednesday in the first round of the N.C. High School Athletic Association 2A dual-team playoffs. The Hornets, the six-time reigning dual-team champions, dispatched Franklin 9-0.

The top six players combined to lose just seven games in nine singles and doubles matches. Kayla Honeycutt, Kathryn Rusher and Julia Honeycutt all won their matches in straight-set shutouts. Grace Steinman won 6-2, 6-1; Maria Capito 6-2, 6-0; and Emily Capito 6-0, 6-1. Steinman and Honeycutt, playing on Court 3 in doubles, were the only doubles pair to lose a game. Honeycutt and Emily Capito paired for an 8-0 win at Court 1, and Rusher and Maria Capito had the same result on Court 2.

Reaching and winning the state dual-team title is the expectation when it comes to Salisbury girls tennis this time of year.

“We want to win the state championship again,” Kayla Honeycutt said. “We know we’re going to have to work very hard. That’s what we’ve been working toward all season, and that is our ultimate goal.”

Salisbury has returned home with the dual-team title in seven of the last eight years. Greene Central beat Salisbury 5-4 in the 2007 championship match.

This year, the Hornets (14-2) breezed to another Central Carolinas Conference title with 9-0 victories in all of their league matches. Their only losses were a 9-0 defeat at the hands of 4A state power Charlotte Catholic and a 6-3 setback to 2A title contender Lake Norman Charter.

Rusher, Kayla Honeycutt and Steinman were on last year’s state championship team. Emily Capito played as a freshman, and she rejoined the team this year after skipping the 2013 season. Julia Honeycutt and Maria Capito are freshmen. Salisbury’s dominance when it comes to the postseason has been discussed among the veterans and those not so experienced at the high school level.

“We try not to put pressure on them, but they understand how important it is because our favorite part is winning,” Rusher said. “We’ve tried to explain in a non-pressured way. We try to keep it light and not too stressful.”

Head coach Scott Maddox said every team is different and, while all of them want to win the state title, a season cannot be judged on that alone.

Salisbury faces Hendersonville in the second round of the dual-team playoffs Oct. 21. Hendersonville, the No. 1 seed from the Western Highlands Conference, beat Forest Hill 6-0.

The dual-team action gets a break this weekend and next while the regional and state singles and doubles tournaments are held. The dual-team championships are scheduled for Nov. 1 at the Burlington Tennis Center.

Going into Wednesday’s playoff match, it had been almost two weeks since the Hornets’ last dual-team match.

“We’ve been off for a long time,” Maddox said. “We haven’t played a match since we played Lexington at the end of the season. I thought the girls looked good for not having played in a long time.”