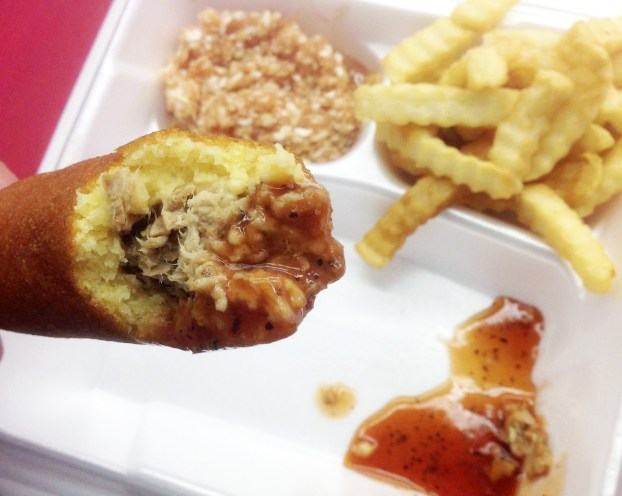 Danielle Cross, daughter of Dan and Joyce Cross, and her husband, Derek, will be selling their new deep-fried barbecue on a stick at the North Carolina State Fair in Raleigh Oct. 16 -26. Photo by David Purtell, Salisbury Post.

Local vendor to serve up deep-fried barbecue at state fair

The upcoming North Carolina State Fair in Raleigh will feature some grub that has its roots in Rowan County.

State Fair Foods, based in Gold Hill, will have one of its food trailers at the fair and will be selling its latest creation: Carolina Barbecue on a stick dipped in a hush-puppy batter.

The concoction is the work of Danielle and Derek Porter, and they said it took four years to figure it out. One of their employees came up with the initial idea, they said.

Lots of “trial and error,” Danielle said, adding the process was “pretty tedious.”

Danielle, who is the girls basketball coach at East Rowan High School, said the barbecue has to be packed tightly enough to be able to be dipped in the batter, and it needs to be a certain width so it cooks all the way through.

The exact method is, for now, a secret, Danielle said.

Dan and Joyce are originally from upstate New York where they were high school sweethearts. But Dan is a couple of years older than Joyce, and when he graduated he joined the Army.

He was based at Fort Gordon near Augusta. Ga., and when he got out of the Army in 1958 he decided to live in the South. After gathering his belongings from home, he headed back south and made it to Winston-Salem before his money ran out.

He worked in construction for a while before meeting a man who was in the carnival business. Dan joined up with him and headed to New Orleans to work games at the carnival. Eventually, Dan ended up working for another man selling corn dogs, called “pronto pups,” in Miami. He traveled around the country selling corn dogs at fairs before going into business for himself in 1968.

“Arranged to make a little deal for a little trailer from an outfit out of Warren, Ohio,” Dan said, adding that the food trailers are called “grab-joints” by people in the business.

He was working a street trailer in Bluffton, Ind., in the 1970s when he noticed an Amish family selling elephant ears.

Dan said he developed a long frying pan to make several elephant ears — fried dough typically covered in cinnamon sugar — at once and began selling them at fairs, big and small, across the South. He said he was the first to sell them at fairs in the South.

He reunited with Joyce, who was running a preschool in Knoxville, Tenn. They got married in 1979.

Joyce said she had planned to go back to school and become a college professor. “But I ended up selling corn dogs and elephant years instead,” she said.

The majority of fairs Dan worked were in the Carolinas, and the couple moved to Gold Hill in 1980. Their home was built in 1855 and sits on 219 acres of land, which was good because Joyce had four children from her previous marriage before Danielle came along.

Fair season lasted from the end of June through November. Dan would haul the trailers from fair to fair with Joyce and baby Danielle right behind hauling a 42-foot house trailer.

The Crosses said they enjoyed the fair business because of the travel and all the people they met and friendships they made over the years.

Dan, 77, said they had to stop working the fairs because of the long days of standing. He now operates Cross Creek Cattle and has around 125 cows.

Joyce said she is in the process of finishing an autobiography about the their life in the fair business.

The Porters, who live in Salisbury, started using State Fair Foods’ equipment about ten years ago and plan to take over the business completely in a couple of years.

Danielle said she loves working fairs because of the “freedom” and the close-knit community that exists among the food vendors.

Derek said he didn’t know what to expect when he first started working fairs, but he said it’s been a neat experience and he enjoys seeing the same customers year after year. He also said the relationships among vendors are strong.

The Porters introduced their barbecue on a stick at the Dixie Classic Fair in Winston-Salem last week and said they received good feedback from customers.