Wineka column: Charlotte Hornets GM fled with his family from Burma in 1968 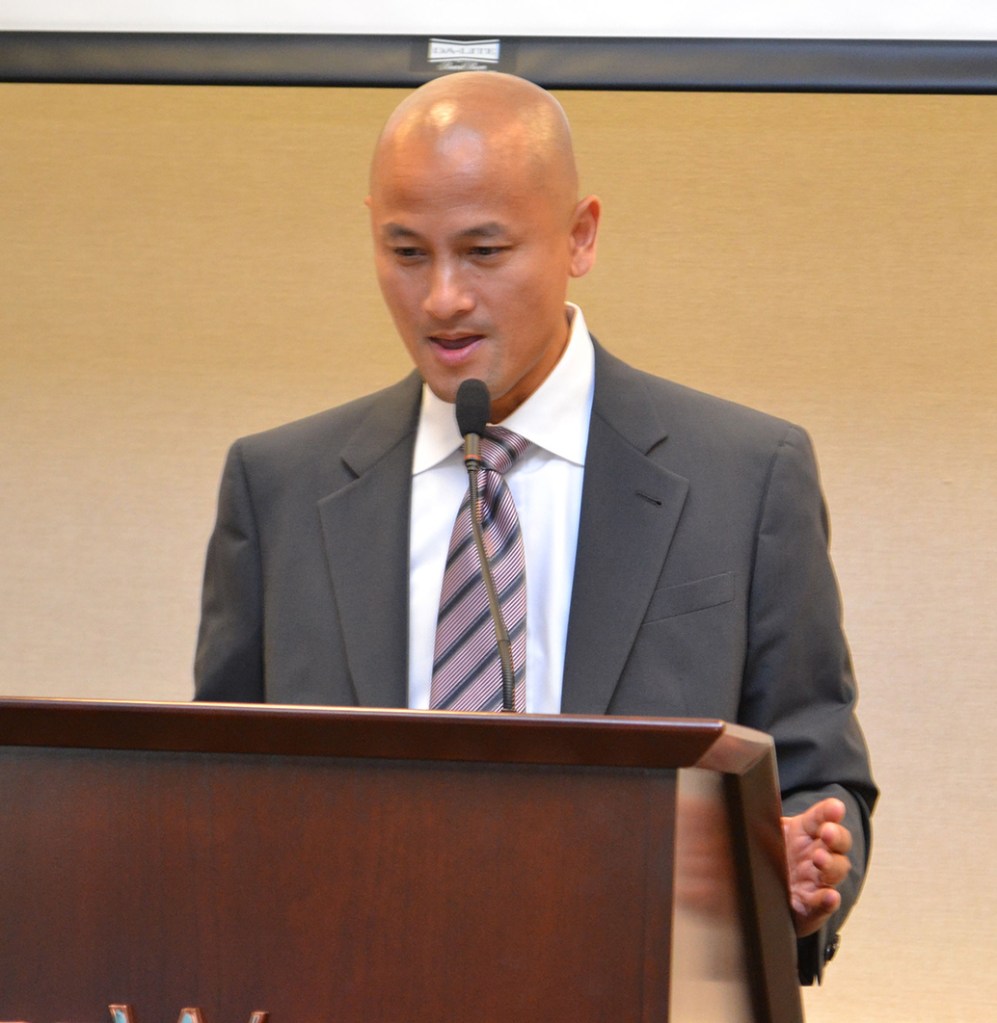 Katie Scarvey/For the Salisbury Post Charlotte Hornets GM Rich Cho speaks at a Charlotte breakfast Tuesday morning when he was honored by the Lutheran Immigration and Refugee Service.

CHARLOTTE — Rich Cho blamed it on a cold, but emotion led him to call Linda Hartke up to the podium Tuesday morning.

You could understand why.

Cho, general manager of the Charlotte Hornets, asked Hartke to read portions of a 1968 letter his father had written from Rangoon, Burma, to a couple in Indiana, thanking them for their offer to take the Cho family in as refugees.

At the time, Cho’s father was a newspaper journalist in Burma while a military junta was taking over the Southeast Asian country. Many families who voiced political beliefs counter to the coup d’etat were disappearing or being placed in jails.

Alan Cho’s newspaper also was critical of the new regime, and he was seeing many of his colleagues detained and tortured.

Rich Cho was almost 3 years old when that letter was written. His father told the Indiana couple they were one of only two families out of many others he had written to in the States who had offered to take his family in.

“We are deeply grateful to you both,” he said.

As Hartke finished reading those words and left Cho by himself again at the podium, the humble Hornets general manager still could not continue. He said, “Thanks,” to the audience and returned to his seat.

It was maybe an abrupt ending, but recognizing the sacrifices his parents, Alan and Shirley Cho, had made for their young family and the achievements Rich Cho has attained today — again, you understand.

The Lutheran Immigration and Refugee Service honored Cho Tuesday morning at a Walk of Courage Award breakfast held on the 30th floor offices of the McGuire Woods law office.

In June, Cho traveled to Baltimore, where LIRS is based, to receive the Walk of Courage Award. Tuesday’s breakfast gave his adopted Charlotte and Lutheran Services Carolinas, headquartered in Salisbury, a chance to celebrate the award with Cho.

Several residents of Trinity Oaks, a LSC community in Salisbury, also made the trip to be at the breakfast.

Cho is the first Asian American to be a general manager in any of the major sports leagues in the United States.

Hartke, president and chief executive officer of LIRS, said the Walk of Courage Award recognizes a person’s flight as a refugee and honors his or her entrepreneurial spirit, the commitment to giving back, the love of family and the embracing of a new country.

This year marks the 75th anniversary of Lutheran Immigration and Refugee Service, which has helped more than 500,000 migrants and refugees find new lives in the United States. It started with the cataclysmic events connected to World War II, as people were fleeing the horrors of Adolf Hitler.

Those early Lutheran refugees 75 years ago were resented and feared, said Hartke, president and chief executive officer of LIRS.

“That pattern happens again and again,” she added.

Over the decades that followed, Lutheran churches and families began to serve refugees and migrants of all faiths who were leaving places such as Burma, Vietnam, Bosnia, Liberia, Ukraine, Haiti, Somalia, Iraq, Congo and Afghanistan.

With each wave of newcomers to America, Hartke said, the country has grown stronger. She credited Lutheran Services Carolinas for helping 322 refugees relocate to the United States in the past year alone.

They have come from Iraq, Afghanistan and Bhutan, she said, predicting a new wave will soon be coming from Syria.

Hartke said all of these newcomers will have an “amazing impact” for the better on schools, the workplace and giving back with their time and talents, much like Cho.

Ted Goins, president and chief executive officer of Lutheran Services Carolinas, said the child and family services side of his agency is probably best known for its support of refugees.

Cho’s parents attended college in the United States — his father at Kalamazoo College; his mom, Indiana University — before returning to Burma to fulfill a required five years of work with the government to pay for their education.

At the time they had to flee Burma, Cho’s grandfather was minister of education for the overthrown government. The Cho family — Rich was 3 years old by the time they reached the United States — wound up in Fort Wayne, Ind.

Shirley Cho had reached out to a teacher she had lived with while she was in college. The woman’s church sponsored the Cho family, and the congregation helped the couple with transportation to the United States, housing, a car, kitchen supplies and clothing for the five children they brought with them.

The Burmese government had allowed the Chos to leave with only $200 and a small suitcase of clothes.

After several years in Indiana, the Chos moved to Federal Way, Wash. Alan Cho supported his family by working as a night-shift manager at a 7-Eleven.

His father died of a heart attack in 1995, the same year Rich Cho decided to pursue a passion for basketball. While enrolled at Pepperdine Law School, he also was an intern for the Seattle Supersonics.

As an intern, Cho teamed with two Microsoft programmers to design and implement one of the National Basketball Association’s most advanced college and professional player evaluation systems. It integrated player statistics, scouting notes and contract details.

The Supersonics hired Cho as their director of basketball affairs after he finished law school, then promoted him to assistant general manager in 2000.

When the team moved from Seattle to Oklahoma City in 2008, Cho moved with them. In 2010, the Portland Trail Blazers hired Cho as their general manager, but he was fired after his first year and immediately hired by the Charlotte Hornets (then the Charlotte Bobcats) as general manager in 2011.

Cho said he has made three trips back to Burma, beginning with a trip with his mother and brothers in 2004 to reconnect with family.

In 2013, he returned to Burma and, with the help of the National Basketball Association and the U.S. State Department, conducted basketball clinics. He went back to Burma this summer.

Meanwhile, the 48-year-old Cho is a mentor to Asian American law students and an advisor to the board of directors of the USA Myanmar Chamber of Commerce.

She presented Cho with citations from the mayors of Charlotte and Baltimore recognizing his leadership and inspiration to others. Cho and his wife, Julie, have two young daughters.

Cho said he often is asked how he reached this point in his life. He credited being at the right place at the right time, while having the chance to learn “from a lot of great people.”