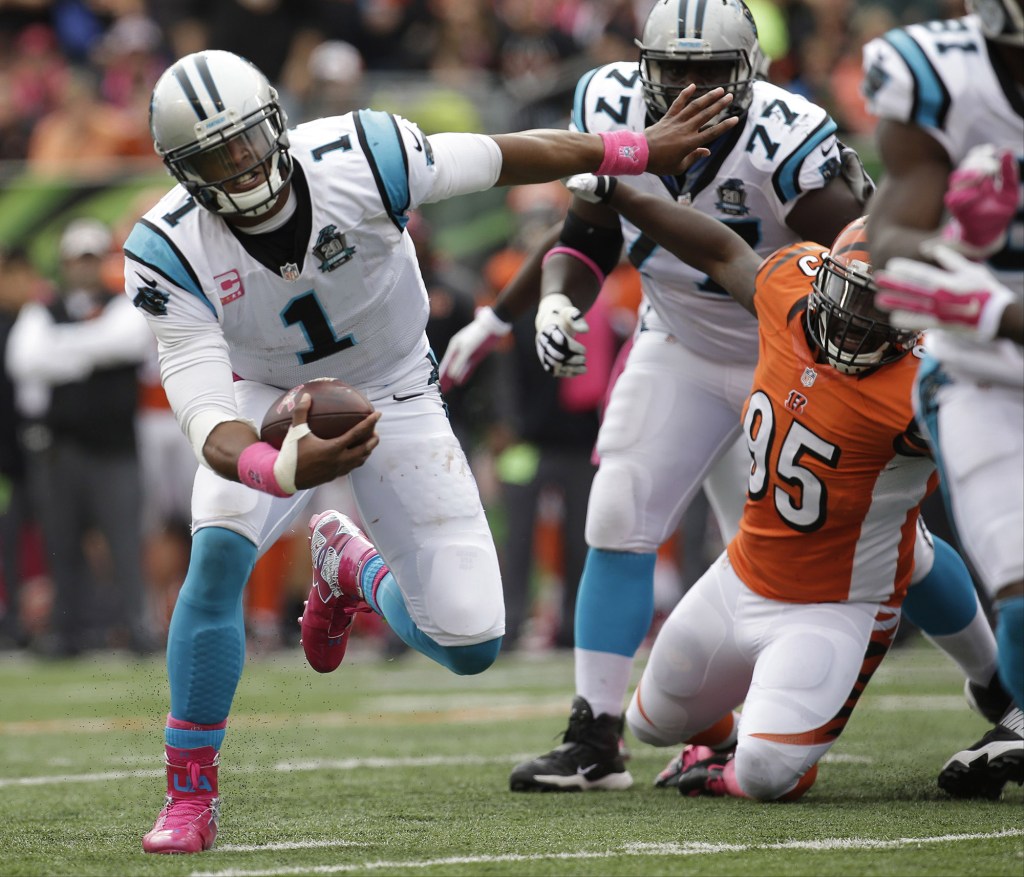 FILE - In this Oct. 12, 2014, file photo, Carolina Panthers quarterback Cam Newton (1) scores on a 12-yard touchdown run in the second half of an NFL football game against the Cincinnati Bengalsin Cincinnati. After his runs were limited the first five games because of ankle and rib injuries, Newton returned in a big way Sunday, rushing 17 times for 107 yards and a touchdown. (AP Photo/AJ Mast, File)

CHARLOTTE (AP) — Cam Newton has given Packers defensive coordinator Dom Capers a little more to think about this week when drawing up his game plan.

Newton could be more of a factor running the ball on Sunday when Green Bay hosts Carolina than he was earlier in the season.

After being used sparingly in the run game during his first four starts, Newton carried a career-high 17 times for 107 yards and scored his first touchdown Sunday, helping the Panthers put up a season-high 37 points against the Bengals in a game that ended in a tie. Ankle and rib injuries limited Newton to 42 yards on 14 carries prior to Sunday.

“I’m not going to say he was a 100 percent healthy, but he’s a lot healthier than he was at the beginning of the year,” Panthers coach Ron Rivera said. “He’s feeling more comfortable and confident in himself — and because of that it allowed us to open up our game plan.”

Newton was unavailable for comment Monday, but said after the game he never expected to be that big of a factor in the run game.

The Bengals basically dared Newton to run and the fourth-year quarterback took advantage on designed read options — a play where he fakes the ball to a running back and keeps it.

Newton proved he was feeling better when he kept the ball on a read option and ran through two Bengals for a 12-yard touchdown run.

“When you keep getting numerous yards, you have to keep calling it,” Newton said. “That’s just the simplicity of football. Coming into this game, I didn’t think I was going to run the ball as much. But like I said, that’s my attitude — anything it takes to win, I’m willing to do.”

The Panthers need Newton close to full strength with a tough stretch of games coming up against Green Bay, Seattle, New Orleans and Philadelphia, especially given their injuries in the backfield.

The Panthers have been playing without running backs DeAngelo William and Jonathan Stewart, and fullback Mike Tolbert. Rivera said Williams will miss “a couple of more weeks” with a sprained ankle and Tolbert is out until late November with a hairline fracture in his leg.

While it’s unlikely Newton carries the ball 17 times every week, Rivera said just the mere threat of having him as an option in the running game will change how other teams defend the Panthers.

“There is now always the threat of him pulling the ball down,” Rivera said. “Now all of a sudden those defensive ends can’t go crashing down and the linebackers can’t start driving at the runner. They have to sit there and read. Now they aren’t getting good jumps to the ball carrier because they aren’t sure who is getting the ball.”

Newton said he’s not 100 percent, but is feeling better.

Rivera said the team noticed last week in practice Newton was moving a little better and figured he could help out more in the running game.

“Everything pointed to his health,” Rivera said. “I said from the beginning we weren’t going to do anything to jeopardize his health. We took our time and did everything the doctors and trainers told us to do. He did everything he was asked to do. It came down to watching him throughout the week.”

Newton pointed to “getting back to the basics” in rehab last week and focusing on movement and range of motion helped.

He said that worked.

Newton’s numbers were dramatically down this year after rushing for 2,032 yards and 28 TDs in his first three seasons.

“It’s kind of weird,” Newton said. “Now everybody is questioning how much am I going to run, or if I’m going to run, or why I’m not running. When I was running, people were saying, ‘Don’t you think you’re running too much?”