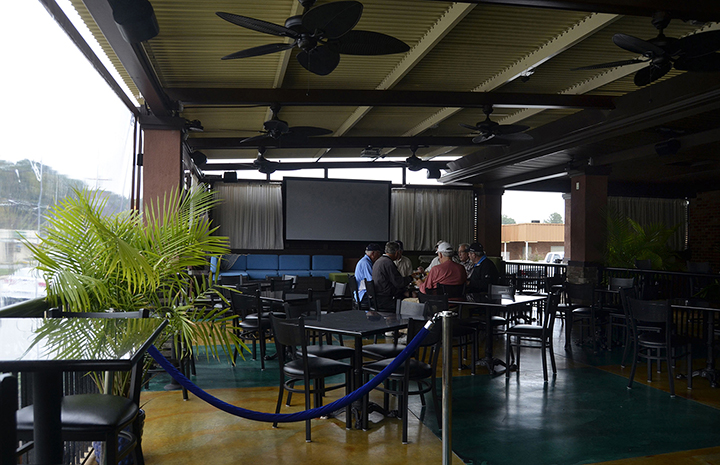 Louie Mourouzidis, owner of DJs restaurant, not shown, has been issued a number of citations and arrested three times for violating the city's noise ordinance. The restaurant has featured several bands in its Sky Lounge, shown here, and have gotten complaints from residents in nearby neighborhoods for loud music. Shavonne Potts/Salisbury Post

This past weekend marks the third arrest for DJs restaurant owner, Elias Mourouzidis. Salisbury Police charged him Saturday with misdemeanor violation of the city’s noise nuisance ordinance after complaints from neighbors about bands at his outside lounge.

Mourouzidis, 50, who is known to many as Louie, has been in business for more than 20 years, but only recently renovated his restaurant to include an outdoor nightclub, Sky Lounge. The lounge includes a number of television screens, an outdoor bar and live music.

Until the live music, it appears law enforcement never had any issues with the restaurant owner.

But Mourouzidis said he feels as though he’s being harassed.

He was given a number of verbal and written warnings about the music after residents in the surrounding neighborhoods complained of music being played well after midnight.

The warnings were followed by a letter and then police began issuing Mourouzidis citations. Police wrote the businessman five citations — July 26, Sept. 7, Sept. 13, Sept. 18, and Sept. 21. He was then arrested and charged Sept. 27, Oct. 3 and the latest arrest was Saturday. Mourouzidis was given a $500 secured bond, which he posted.

“People might have the perception that I’m not following the law,” he said but the ordinance is vague. He added if the ordinance included a set decibel level or time frame the musicians needed to wrap up then he could abide by it.

The ordinance states the playing of any “television, radio, phonograph or other musical instrument in such a manner or with such a volume so as to annoy or disturb the quiet, comfort or repose of any person in any dwelling, hotel or other type of residence, shall be deemed to be unlawful.”

Salisbury Police Chief Rory Collins said there have been 17 complaints from people who live in the surrounding neighborhoods with one of the furthest complaints coming from someone who lives on West Bank Street, near Miller Recreation Center.

Mourouzidis said 95 percent of the complaints have come from residents near or on West Bank Street, but he and his staff have driven in the area when the bands have performed and he said they’ve not been able to hear music that far out.

He said one band couldn’t even be heard from Moose Pharmacy, less than 500 feet away on the other side of Krispy Kreme.

Collins admits the ordinance does not include any wording about decibel levels nor does it specify quiet hours, but his department is in the process of looking into ways to revise the ordinance and study ordinances in similar towns that provide those details.

Until the ordinance can be revised the current ordinance stands, Collins said.

“It maybe a little less concise than other cities. It’s the ordinance we’ve had in place for years. We have never encountered a situation like this,” Collins said.

He said as police chief for the city of Salisbury he would like to see the ordinance include specifics about sound levels and quiet hours.

“We are not out to get DJs, but we are in a position where we can’t just sit back and do nothing,” he said.

Collins called the situation unfortunate and said he wants DJs to be a successful restaurant, but the fact is they’ve had complaints nearly every weekend.

“One complainant closer to the restaurant said it (the music) was vibrating the house. It’s not one or two folks calling,” Collins said.

Mourouzidis said he doesn’t think it’s fair there are businesses downtown that are allowed live bands and no one complains.

Collins explained that the citizens who complain have to also agree to appear in court to testify as witnesses. In the cases against Mourouzidis, residents have agreed to testify.

Mourouzidis said what he’s created in the Sky Lounge “is a good thing.”

He’s met with an attorney and says they are determining whether the restaurateur needs to meet with city council.

“I want the rules and the laws to apply to everybody,” Mourouzidis said.

Mourouzidis said he just wants to know what he’s allowed to do and what options he has available to him.

A few days ago Mourouzidis placed a vinyl curtain-like enclosure around the outside to the lounge, but said it’s more for the pending colder weather than the noise, he said.

But, he did say it does seem to reduce the noise.

Mourouzidis is expected in court later this month and in November regarding the noise violations. A citation issued July 26 was dismissed by the district attorney’s office in August.