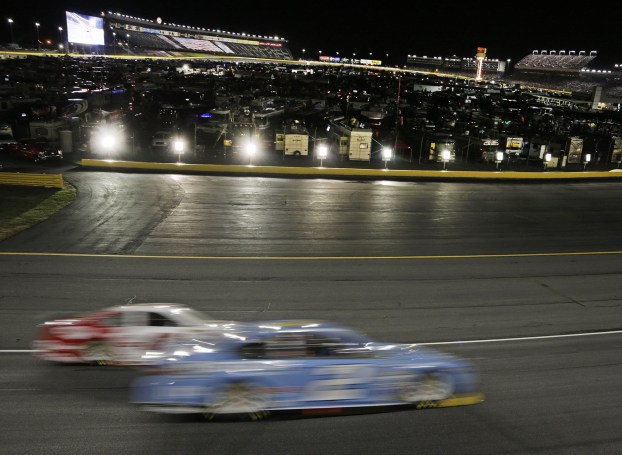 If Kenseth is fighting, then tempers are certainly running quite high. They reached a boiling point in the aftermath of Saturday night’s race as Keselowski, Kenseth, Dale Earnhardt Jr. and Jimmie Johnson all saw their championship hopes fade to near-desperate status.

The pressure is on — every week — in NASCAR’s new championship format, and the frayed nerves unraveled on the track, on pit road and in the garage. Denny Hamlin had to be restrained from going after Keselowski, but Kenseth got to the 2012 champion in the dark alley-like area between a pair of Team Penske haulers.

Kenseth quickly approached Keselowski from behind and nearly tackled him. He had Keselowski wrapped in his arms when crew members quickly peeled him off, and Keselowski crew chief Paul Wolfe pulled Kenseth out of the scrum in what appeared to be a choke hold.

As race winner Kevin Harvick celebrated in Victory Lane, activity in the garage came to a near-halt as drivers and crews watched replays of the melee.

That was at the root of the post-race Charlotte activities: There is no room for error in the Chase, and a bad night will put a driver on the brink of elimination.

Kenseth, who struggled for large portions of the race and was penalized by NASCAR before the start for an unapproved adjustment made to his car, was incensed that Keselowski hit his car on pit road after the checkered flag. Kenseth had already taken off his seatbelts and lowered his window net, and he felt the contact from Keselowski could have caused injury.

“If you want to talk about it as a man, try to do that,” Kenseth said.

For his part, Keselowski said the hit on Kenseth was warranted because Kenseth had driven across his nose under a caution with six laps remaining. That contact caused front-end damage that Keselowski believed contributed to his 16th-place finish. The two had an earlier incident while racing for the lead when Kenseth was squeezed into the wall while he attempted to pass Keselowski.

Hamlin was upset with how Keselowski raced him for position with two laps remaining. Hamlin felt Keselowski pushed him too hard into a corner, contact that sent both drivers plummeting in the field.

Hamlin admitted to brake-checking Keselowski during the cool-down lap, and Keselowski retaliated with a failed attempt to spin Hamlin.

That’s when Keselowski set his sights on Kenseth, hitting him on a busy pit road. Tony Stewart was the innocent bystander in that mess, with his car drilled from behind after Keselowski hit Kenseth. He responded by backing his car up and into Keselowski to crumple Keselowski’s front end.

Keselowski then headed to the garage, with Hamlin in pursuit. Their cars made contact and were briefly stuck together, so Keselowski hit the gas to pull away. That left a burnout mark and led Hamlin to accuse Keselowski of being “out of control.”

It’s not clear if Keselowski — or Hamlin or Kenseth — will be punished by NASCAR on Tuesday, the day penalties are traditionally issued. NASCAR vice president of competition Robin Pemberton said the sanctioning body will review the final on-track laps, and everything that occurred on pit road and in the garage.

NASCAR in May fined Marcos Ambrose and Casey Mears for fighting in the garage after a race at Richmond. Harvick was fined in 2011 for a pit-road confrontation with Kyle Busch in which NASCAR cited safety concerns of Busch using his car to push Harvick’s car away. The next year, Kurt Busch was fined $50,000 for dangerous driving on pit road when he hit Ryan Newman’s car during a confrontation.

But in the case of Saturday, with so much focus on the new Chase and the attention for the post-race skirmishes, it’s not clear if NASCAR will punish those involved or pat them on the back. Harvick said there was no way NASCAR takes any action.

“They love it. They were fighting afterwards, that’s what it’s all about,” Harvick said.

Keselowski understood Stewart’s frustration. He didn’t much care about Hamlin or Kenseth’s explanations, and firmly believed both drivers had it coming.

“I figured if we’re going to play car wars under yellow and after the race, I’ll join, too,” he said. “Those guys can dish it out, but they can’t take it. I gave it back to them and now they want to fight.”

Hamlin is the only driver involved who left Charlotte in decent shape in the Chase. He is seventh in the standings headed to Talladega, where the bottom four in the 12-driver field will be eliminated.

It means Kenseth and Keselowski likely need a win next Sunday to remain in the Chase, same for Earnhardt and Johnson. Although Kenseth is winless this season, he has been consistently good. The other three were dominant and combined for 10 wins in the first 26 races, but their chances of staying in the Chase are now very bleak.

“There’s a lot on the line. The new format, I think we all knew would make the emotions get out of whack by who’s in, who’s out, who’s on the bubble, how your races are going,” second-place finisher Jeff Gordon said. “Everybody is pushing extremely hard. It’s only going to intensify from here on out.”

Panthers, Bengals battle to 37-all deadlock