Panthers, Bengals battle to 37-all deadlock 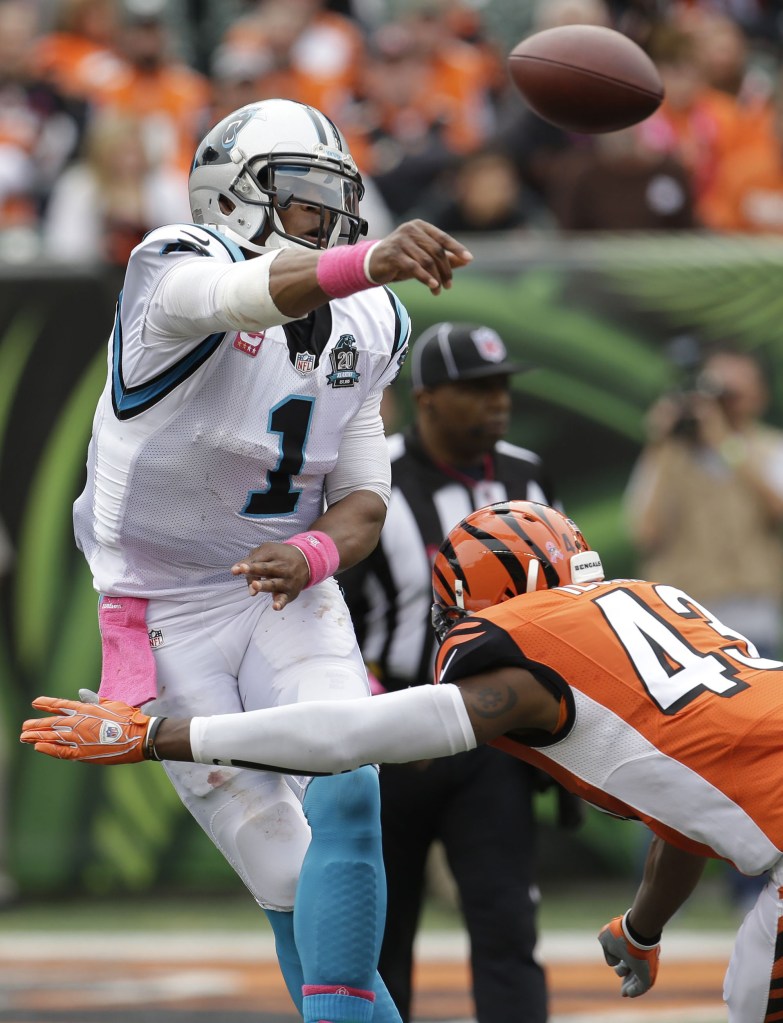 Newton re-emerged as a dual-threat danger on Sunday, leading Carolina on several late comebacks that took the game to overtime. Facing a last-second loss, the Panthers got a break when Nugent missed a 36-yard field goal attempt on the final play, resulting in a 37-all tie with the Cincinnati Bengals.

It was the NFL’s first tie of the season. Games usually don’t finish without a winner — at least, not outside of Cincinnati.

The Bengals and Eagles played to a 13-13 tie at Paul Brown Stadium in 2008, when Cincinnati’s Shayne Graham missed a 47-yard try wide with 7 seconds left in overtime. Four years later, San Francisco and St. Louis played to a 24-all tie.

The NFL changed the overtime rules to avoid having games end on a field goal by the receiving team for the kickoff. Minnesota and Green Bay finished 26-all last season under the new format.

Panthers receiver Jason Avant was with the Eagles for that ‘08 tie in Cincinnati. This one didn’t feel any better.

“You don’t play football to tie,” Avant said. “It’s not as bad as a loss, but pretty close. When you think about playing, you never think about tying.

“It’s the second tie of my life. Both in Cincinnati.”

The crowd of 57,053 at Paul Brown Stadium was standing and ready to celebrate when Nugent set up for the final kick and only 2 seconds left on the clock. It was a good snap and hold. Nugent rushed his approach and sliced it wide right.

“That was the worst ball I’ve ever hit in my career,” Nugent said. “My plant foot was way too far forward. I think there was a little excitement. I was a little too quick.”

The crowd stood stunned. The players walked onto the field to shake hands, trying to figure out what it all meant.

“I’m treating it as if it was loss,” said running back Fozzy Whittaker, who had a 4-yard touchdown run. “We had many opportunities to win it. But it doesn’t hurt as bad (as a loss), I guess.”

A matchup of division leaders and impressive quarterbacks came down to the kickers.

That was enough time for Andy Dalton to maneuver the Bengals into position to win it. He was 8 for 9 for 87 yards with one throwaway in overtime. Dalton was 33 of 43 overall for 323 yards with two touchdowns and two interceptions.

The game marked Newton’s return as a running threat. He had been mostly limited to throwing the ball because of offseason ankle surgery and cracked ribs from the preseason.

With their backfield depleted by injuries, the Panthers turned Newton loose on Sunday. He ran a team-high 17 times for 107 yards, including an 11-yard touchdown in the second half. He also was 29-of-46 passing for 284 yards and two touchdowns, including a 13-yarder that put Carolina up 31-24 with 4:50 left.

The drama was just starting.

Adam “Pacman” Jones ran the kickoff back 97 yards to set up a tying touchdown, and the kickers traded field goals in the closing minutes. Gano’s 44-yarder sent it to overtime.

There were other big plays, too. Giovani Bernard had an 89-yard touchdown run — the second-longest in Bengals history — to help Cincinnati to a 17-10 halftime lead. Bernard carried 18 times for a career-high 137 yards, missing part of the second half with an injured right shoulder.

The 74 combined points were the third-most in an NFL tie, according to STATS.

Time for the Blue Bears to bounce back from…