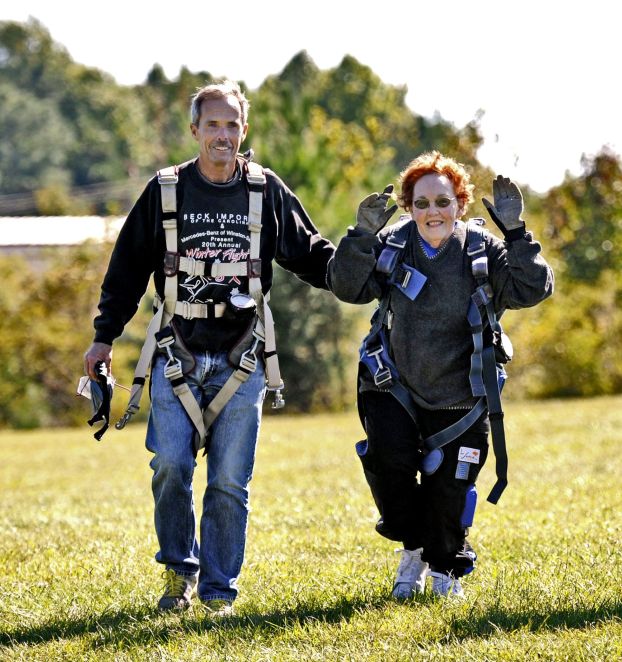 Post reporter David Freeze and 81 year old Irene Moeller walk from the field after completing their skydive with Piedmont Skydiving at the Rowan Airport. photo by Wayne Hinshaw, for the Salisbury Post

Santa has continued to make sure that I still get a great gift every so often. The jolly one has somehow made sure that his gifts are appreciated, too.  When Irene Moeller went for her first skydiving adventure on Saturday, I was very fortunate to go along with her. Santa gave me the opportunity.

One of the most popular events at the Rowan County Airport each year is the Santa skydiving visit in December. The first time for Santa’s drop-in was December 2012. Claus’s scheduling team worked with Airport Manager Thad Howell, allotting just enough time for Santa to skydive into a landing zone near the airport’s main building. Of course, Santa always has plenty of time to talk afterward to the kids who attend.

Piedmont Skydiving helped coordinate Santa’s arrival. Owner Jim Lanningham said, “We don’t often get somebody with such celebrity status that is willing to skydive. However, Mr. Claus spends so much time at high altitude that he has absolutely no problem with jumping from a plane. In fact, we have worked with Mr. Claus with his recent time-saving plan where he jumps out of his sleigh to land on the rooftops while the reindeer take a more leisurely route to a very quiet landing. By the time Claus has completed unloading his gifts, the reindeer have caught their breath and are ready to take off again.”

Jim Lanningham gave me the chance to experience a skydiving adventure more than a year and a half ago. I entertained the thought and never could find the right time to go do it. When Karen Leonard from Oak Park Retirement asked me to see if several of her residents could go for their own skydiving adventure, I thought that this would be the perfect time for my own experience.

It took us a couple more months to get everything scheduled, but finally the big day came. I will admit to being a little apprehensive about the jump, especially with the winds blowing as they were on Saturday. I did think that the bright and sunny day would make for great scenery from 10,000 feet in the air. We were asked to arrive at the airport at 1 p.m., and Irene and I were both there early. It was a little daunting to sign so many waivers, but the paperwork is certainly a necessary part of what we were about to do.

Hawthorne Retirement Executive Director Ron Moye took the place of one of the Oak Park Residents who decided not to jump. He went up first, and we waited for him, certainly leaving lots of time to wonder what the actual jump would be like. While he was ascending to the jumping altitude, I enjoyed talking with some of the 30-40 people who were either there to jump or watch Irene. Almost none of the group had done this before, except for a few who were required to do it in the military.

The plane landed again, and so did Ron. It was our turn. Irene was already suited up and strapped in, and my jump instructor, Charles “Chuck” Hilliard, got me ready to go. We headed out to the plane and loaded up, with me sitting on the floor of the plane behind Chuck. I was right beside the door, which remained closed as we climbed to gain altitude. It was loud in the plane, but I could hear some of what the others were saying to each other. Jim filmed Irene several times with his GoPro camera, and everybody seemed calm enough.

I noticed the pilot point to the altimeter on his wrist. Chuck had me turn around with my back to him and he tightened the straps on me and buckled us together. He made sure my headgear and goggles were ready to go. One of the most heart-thumping moments came next as the pilot opened the door. I had been told to put my feet on the wheel strut and I did even though the wind was pushing hard against them. Chuck got us set, I grasped my shoulder straps as instructed and we were out the door into a roll that first took us out backward, and then we rolled to face downward as the freefall began. I still had my hands on the straps and Chuck got me to put them outward like Superman.

By then, the most exhilarating part of the whole experience was underway. I loved the freefall, and it seemed over all too soon as I heard and then felt the gradual slowing of the fall as the parachute did its job. Chuck talked to me, making sure I was OK and telling me to see if I could clear my ears. He told me to pinch my nose, blow out and try to release the pressure.

The next several minutes completed the parachute portion of the jump as Chuck pointed out the scenery of Charlotte, Greensboro and the mountains on a perfectly clear day. He let me use the maneuvering straps and showed me how to almost stop our descent, along with how quiet it got when I did it.

The ground came up quickly, but we had a good landing as we set down on our butts with our feet up. It was done! What I had thought about for many months was now complete and checked off my bucket list. Chuck is nearing 6,400 jumps himself, and he certainly was very polished. He made me comfortable throughout.

Bottom line, if you have thought about doing your own jump or might consider it after reading the stories of our adventures, then go for it. Another dream fulfilled, another item off my list. Thanks to Santa and Piedmont Sky Diving. For more information, go to www.piedmontskydiving.com. Watch for Santa to return to the Rowan County Airport on Dec. 13.

By Katie Scarvey For the Salisbury Post Ten-year-old Camille Palmer loves art — and how could she not, given that... read more