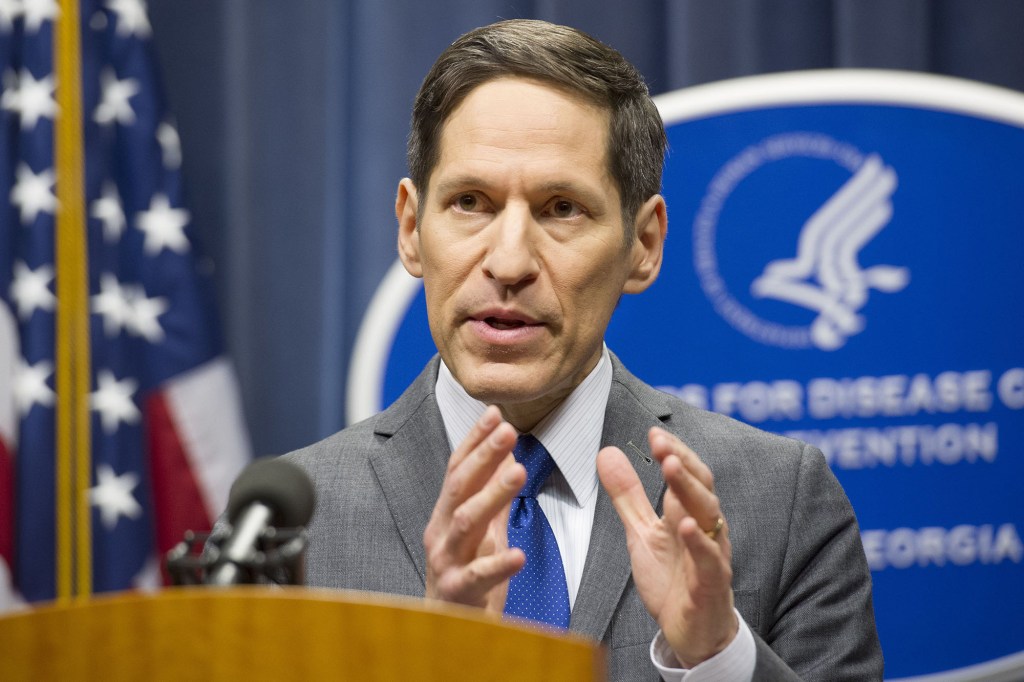 Dr. Tom Frieden, head of the Centers for Disease Control and Prevention, speaks at a news conference, Sunday Oct. 12, 2014, in Atlanta. A Texas health care worker, who was in full protective gear when providing hospital care for Ebola patient Thomas Eric Duncan, who later died, has tested positive for the virus and is in stable condition. (AP Photo/John Amis)

DALLAS (AP) — A “breach of protocol” at the hospital where Ebola victim Thomas Eric Duncan was treated before his death led to the infection of a health care worker with the deadly virus, and other caregivers could potentially be exposed, federal health officials said Sunday.

The hospital worker, a woman who was not identified by officials, wore protective gear while treating the Liberian patient, and she has been unable to point to how the breach might have occurred, said Dr. Tom Frieden, head of the Centers for Disease Control and Prevention. Duncan was the first person in the U.S. diagnosed with Ebola.

The CDC confirmed Sunday afternoon that the woman had tested positive for Ebola — the first known case of the disease being contracted or transmitted in the U.S.

The missteps with the first patient and now the infection of a caregiver raised questions about assurances given by U.S. health officials that any American hospital should be able to treat an Ebola patient and that the disease would be contained.

At a briefing in Atlanta, Frieden said that at some point during Duncan’s treatment, “there was a breach in protocol, and that breach in protocol resulted in this infection.” He added that officials were “deeply concerned” by the infection of the worker.

President Barack Obama asked the CDC to move as quickly as possible in investigating the incident, the White House said.

Dallas police stood guard outside her apartment complex and told people not to go inside. Officers also knocked on doors, made automated phone calls and passed out fliers to notify people within a four-block radius about the situation, although Dallas authorities assured residents the risk was confined to those who have had close contact with the two Ebola patients.

The worker wore a gown, gloves, mask and shield while she cared for Duncan during his second visit to Texas Health Presbyterian Hospital, said Dr. Daniel Varga of Texas Health Resources, which runs the hospital.

Duncan, who arrived in the U.S. from Liberia to visit family Sept. 20, first sought medical care for fever and abdominal pain Sept. 25. He told a nurse he had traveled from Africa, but he was sent home. He returned Sept. 28 and was placed in isolation because of suspected Ebola. He died Wednesday.

Liberia is one of the three West African countries most affected by the Ebola epidemic, which has killed more than 4,000 people, according to World Health Organization figures published Friday. The others are Sierra Leone and Guinea.

Texas health officials have been closely monitoring nearly 50 people who had or may have had close contact with Duncan in the days after he started showing symptoms but before he was diagnosed with the disease.

The health care worker reported a fever Friday night as part of a self-monitoring regimen required by the CDC, Varga said.

Another person who was described as a “close contact” of the health worker has been proactively placed in isolation, he added, without elaborating on where that person is being monitored. The hospital said its emergency department is diverting ambulances to other hospitals, though still accepting walk-in patients.

Frieden said officials are now evaluating and will monitor any workers who may have been exposed while Duncan was in the hospital.

Among the things the CDC will investigate is how the workers took off protective gear, because removing it incorrectly can lead to contamination. Investigators will also look at dialysis and intubation — the insertion of a breathing tube in a patient’s airway. Both procedures have the potential to spread the virus.

“We knew a second case could be a reality, and we’ve been preparing for this possibility,” said Dr. David Lakey, commissioner of the Texas Department of State Health Services. “We are broadening our team in Dallas and working with extreme diligence to prevent further spread.”

Health care workers treating Ebola patients are among the most vulnerable, even if wearing protective gear. A Spanish nurse assistant recently became the first health care worker infected outside West Africa during the ongoing outbreak. She helped care for two priests who were brought to a Madrid hospital and later died. More than 370 health care workers in West Africa have fallen ill or died since the epidemic began earlier this year.

In the health worker’s neighborhood, one police officer said an industrial barrel outside contained hazardous waste taken from inside the building. Nearby residents periodically came out of their homes to ask about the commotion.

Kara Lutley, who lives a half-block from the complex, said she never received a call or other emergency notice and first heard about it on the news.

“I’m not overly concerned that I’ll get Ebola,” she said.

Officials said they also received information that there may be a pet in the health care worker’s apartment, and they have a plan in place to care for the animal. They do not believe the pet has signs of having contracted Ebola. A dog belonging to the Spanish nurse was euthanized, drawing thousands of protests.

Ebola spreads through close contact with a symptomatic person’s bodily fluids, such as blood, sweat, vomit, feces, urine, saliva or semen. Those fluids must have an entry point, like a cut or scrape or someone touching the nose, mouth or eyes with contaminated hands, or being splashed. The World Health Organization says blood, feces and vomit are the most infectious fluids, while the virus is found in saliva mostly once patients are severely ill. The whole live virus has never been culled from sweat.

Duncan came to Dallas to visit his family.

The trip was the culmination of decades of effort, friends and family members said. But when Duncan arrived in Dallas, though he showed no symptoms, he had already been exposed to Ebola. His neighbors in Liberia believe Duncan become infected when he helped a pregnant neighbor who later died from it. It was unclear if he knew about her diagnosis before traveling.

On Saturday, customs and health officials began taking the temperatures of passengers arriving at New York’s Kennedy International Airport from Liberia, Sierra Leone and Guinea in a stepped-up screening effort.