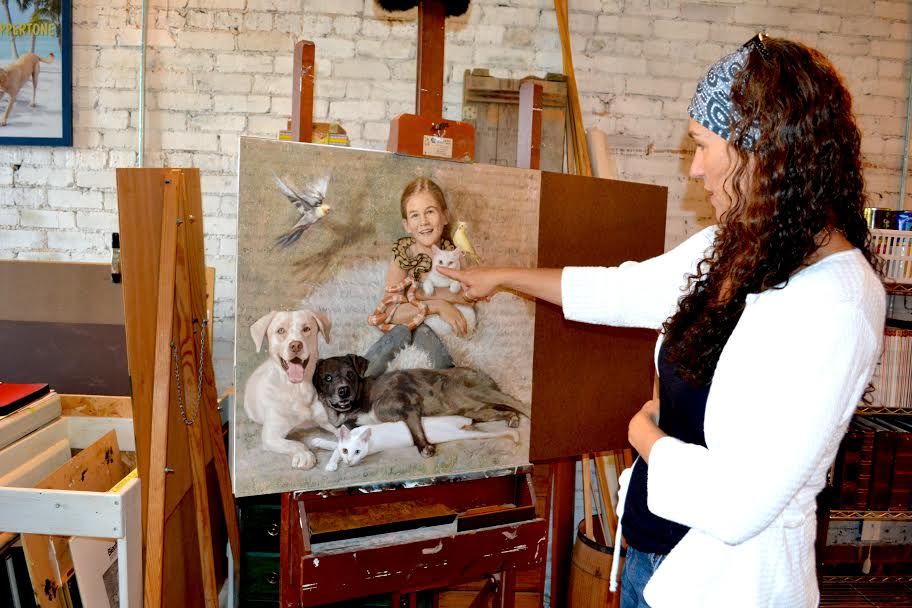 Ten-year-old Camille Palmer loves art — and how could she not, given that her mom is Cara Reische, one of Rowan County’s best-known and loved professional artists?

Camille also loves her dog, Bert, whom she describes as a “fluffy, giant, gentle dog.”

Bert was adopted from the Rowan County Animal Shelter right before Camille’s birthday and is now part of a three-dog family that includes Mo and Louie, who are also rescue dogs.

An animal lover who is just as comfortable around snakes as canines, Camille decided she wanted to use her 10th birthday as an opportunity to help the animal shelter through a new group her parents are involved in: Shelter Guardians.

Started by Nina Dix, Shelter Guardians, Inc. exists to support the animal shelter. Camille’s dad, Jon Palmer, is a board member for the group, which just this week received its 501(c)(3) designation as a nonprofit. Cara created the group’s logo.

People have been eager to help support the shelter, but money donated to the shelter goes into the county’s general fund and not directly to the shelter facility, Nina says. So she began a partnership with Dr. Greg Lowe, a veterinarian, which evolved into Shelter Guardians.

The group’s mission is to find ways to help the animals at the shelter survive and be in good health to have the best chance at adoption. A big part of that is getting vaccines for the animals as they enter the shelter.

With the support of the community and the shelter staff, Shelter Guardians “will provide everything from vaccines, medical care, education, equipment, facility improvements to a new facility — and many things in between,” Nina says.

Although the group hasn’t existed for long, it’s already making a difference. An early project was an in-duct air purification system to help prevent the spread of disease at the shelter. Uptown Dogs and Cats of Salisbury is donating two grooms a week to help promote adoptions.

To do their part for the cause, Camille and 16 of her friends met on Aug. 24 in her mom’s Spencer studio for a party at which the main activity was creating animal-themed art that will be sold at the Fine Frame Gallery Oct. 18.

The afternoon also featured a few special visitors. Nina brought along her German shepherd, Magnum, as well as a dog named Drew — reminding the girls of what the project was for. Drew was taken from the shelter into Nina’s rescue group, “One Dog at a Time” and then adopted out. He’s now a therapy dog.

In the weeks following the party, Camille created more animal-themed art, and Cara also did some animal-themed paintings, including whimsical companion pieces called “Cat” and “Mouse” — which will surely be hot items at the “Art for Animals” show.

You can check out the “Art for Animals” exhibit and sale from 5-7 p.m. Saturday, Oct. 18, at Fine Frame Gallery.  All proceeds will go to Shelter Guardians.

For more information about Shelter Guardians, go to www.shelterguardians.org, or visit their Facebook page.

If you don’t have your own dog, you can get to know some of the adoptable dogs — which will be wearing “Adopt Me” bandanas.

There will be costume contests for humans and dogs, as well as Musical Sit and Trick or Treat for dogs.

Admission is by $10 donation; children under 12 a $2 donation. Dogs are free!