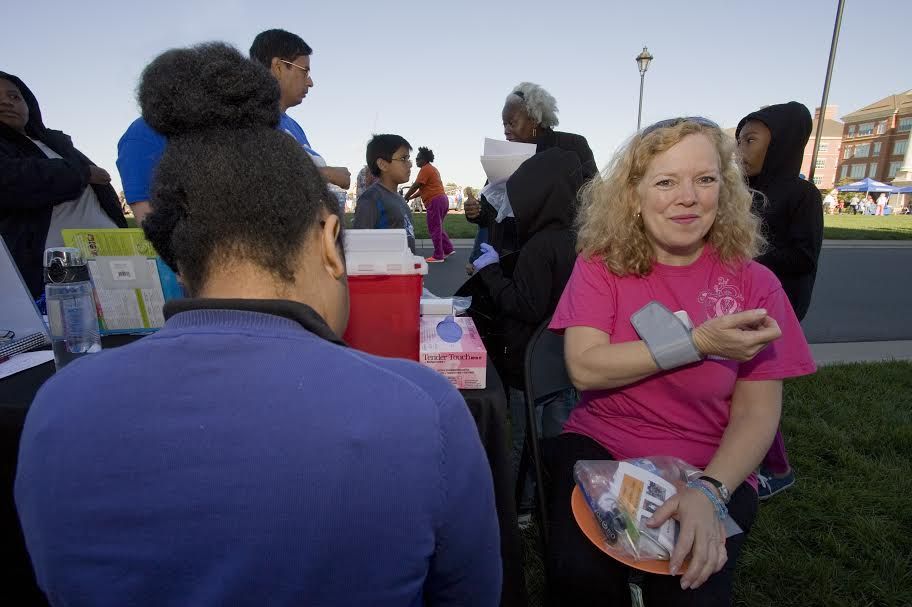 KANNAPOLIS — Science, sunshine and the promise of breaking a sweat drew more than 300 people to the N.C. Research Campus Saturday, Oct. 4, for a 5K run and community appreciation event hosted by Duke University’s MURDOCK Study.
“We came out to be part of the community,” Kannapolis resident Mary Beth Ballantine said. “I wanted to get my kids out on a beautiful Saturday morning to move their bodies.”
Ballantine and her 6-year-old son Kier participated in the 5K and joined residents from Huntersville, Concord, Salisbury and the surrounding area enjoying activities like Zumba, line dancing and yoga. The MURDOCK Study’s monthly Walk With a Doc, where participants get health tips from a local physician and then take a stroll together, took place during the appreciation event as well.
Ballantine was already familiar with the MURDOCK Study when she and Kier laced up their running shoes Saturday morning. Her entire State Farm Insurance office enrolled in the study several years ago.
“We gave our samples on the same day together, and we’ve just continued to fill out our survey once a year,” she said. “You know, I’m kind of a science nerd myself, so I’m interested in 50 years in finding out what the results are.”
To join the study, participants donate about 3 tablespoons of blood and 3 tablespoons of urine once and fill out a health questionnaire each year. Duke researchers and their collaborators are using the biological samples, which are stored in a biobank in Kannapolis, to better understand chronic diseases like multiple sclerosis and diabetes and ultimately come up with more effective treatments.
Duke hosted Saturday’s event to say thanks to the more than 10,800 people who have enrolled in the MURDOCK Study so far. The goal is 50,000 enrollees, and Saturday’s race was dubbed “5K for 50K.”
People who live in Cabarrus County, Kannapolis and portions of Rowan, Stanly and Mecklenburg counties are eligible to enroll. Richard Horton, who lives in Concord and came out for the 5K, said Saturday’s event sparked his interest in the study and inspired him to hit the pavement more often.
“I thought it was wonderful,” Horton said. “Something this simple can be this fulfilling for those of us who don’t get an opportunity to get out as much as these other runners.”
He said he was lured by “the sunshine, the bright weather, the beautiful people and the ability to stay healthy.”
Lorraine Tyson of Concord said she showed up Saturday for the same reasons she enrolled in the MURDOCK Study — to learn and to be with a community.
“The study has taught me things, and I like being a part to learn with them,” Tyson said. “They have given me a lot of new information.”
A variety of healthcare providers were present Saturday, and Tyson said she took full advantage.
“The best part was to be able to walk around and learn and see different things that are a benefit to me to know,” she said.
Tyson participated in health screenings offered by Novant Health and was surprised to learn that she had low blood pressure.
“I didn’t even know it,” she said. “So I’ve learned a lot today and had a great time.”
Josh Parrish of Kannapolis won the 5K, followed by Marc Bax of Concord in second place and Dan DeZordo of Huntersville in third.
Duke University launched the MURDOCK Study in 2007 with a $35 million gift from David H. Murdock, founder and developer of the N.C. Research Campus. The study’s name stands for Measurement to Understand the Reclassification of Disease Of Cabarrus/Kannapolis.