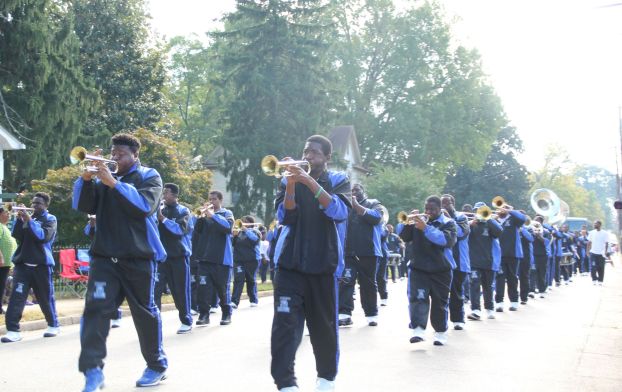 With less than two minutes remaining in regulation Saturday, Livingstone College quarterback Drew Powell threw an interception inside Alumni Memorial Stadium, dashing the team’s hopes of winning homecoming.
The loss was tough to swallow for Livingstone alumni and fans, and it certainly detracted from homecoming. But Livingstonians said they’re still proud of their institution and are impressed with on-campus improvements that have been made in recent years.
They also said they’re proud of the football team, which under Coach Daryl Williams is 4-2 overall, 1-2 in the CIAA, and homecoming 2014, billed as “History in the Making,” was outstanding.
“Naturally we wanted to win, but the defeat doesn’t diminish how much fun it is being back on campus and seeing former classmates,” said Mary Williams, a 1965 graduate. “For the last several years, one of the things that has really touched me is the beautification of the campus. I’m truly impressed by it.”
Williams spoke while watching the homecoming parade with longtime friend Barbara Poe, a 1966 graduate.
“It’s wonderful to come here and get re-energized around our mission of scholarship and service,” said Poe. “It’s a warm feeling to see this legacy continue.”
Both women are members of the Washington area chapter of the Livingstone College National Alumni Association and say it would take a compelling reason for them to miss homecoming.
DeVese Perry Beverly, a 1960 graduate, and Earle Smith, who enrolled in 1956 but left to get married and finished in 1970, feel the same. They were cheerleaders at Livingstone and have fond memories of their alma mater.
“I’m just so pleased about how much growth the college has made since I was a student here,” Beverly said. “It’s wonderful being back and sharing the love that we always had for Livingstone.”
Bishop George E. Battle, Jr. can talk all day about his love for Livingstone. He’s the senior bishop in the African Methodist Episcopal Zion Church, which founded the college in 1879. He’s chairman of the school’s Board of Trustees. And he’s a member of the “One of Kind Class of 1969.”
As he waited on the parade to start Saturday, Battle reminisced about organizing students for a peaceful march after the assassination of Dr. Martin Luther King Jr. and also discussed working at Belk and serving as pastor of several churches during his days at Livingstone.
“I’d go away for the weekend to work and pastor at the churches, and my roommates would be waiting on me when I returned Sunday because they knew I’d have boxes of food from the church members,” Battle said. “I’d have fried chicken, cake and whatever else was prepared for us. What they couldn’t give me in money, they gave me in food.”
Battle played in the marching band while attending Livingstone and says he’s blown away by how good the band is today under the leadership of Sidney C. Sessoms, Jr.
“Homecoming has always been special, and it’s really not about winning as much as it is about reconnecting with people,” Battle said. “It’s just a good atmosphere at Livingstone.”
Battle and his wife, Iris Miller Battle, watched the parade with Livingstone President Dr. Jimmy R. Jenkins Sr., his wife Dr. Faleese Moore Jenkins and others. When it ended, Battle said the parade, which was organized by Director of Student Activities Alfonzo Duncan and featured a plethora of marching bands and organizations, was one of the best he’s seen. That sentiment was echoed by many along Monroe Street.
“I think it’s awesome,” said Jalan Alexander, 11, a fifth grader at Isenberg Elementary School who watched with his mom Cathy. “I like it because we get to listen to the bands.”
The bands were judged by Livingstone employees Andrea Kirk, Miriam Rush and Cherisse Hughes, who awarded first place to Carver High School of Winston-Salem, second place to West Charlotte High School and third place to Fairfield Central High School in Winnsboro, S.C. Fairfield Central’s band director, Ferdinand Cooper, is a 2001 Livingstone graduate who played in the band for the Blue Bears.
Chad Mitchell, Livingstone’s 2010 Student Government Association president, watched with his wife Antonia Howell Mitchell. Both are recent Livingstone graduates.
“The parade was really good this year, and I enjoyed it,” he said. “It was great seeing the community come out to support Livingstone.”
Fannie Butler, a 1949 graduate and president of West End Community Organization, and Rosalind Mitchell, a member of West End Pride, served as parade marshals.
Dr. Leslie Stokes and Dr. Larry D. Melton, both Livingstone graduates and former members of the college’s Board of Trustees, said they’re proud of the changes Jenkins has made since assuming the top administrative post in 2006. Dr. Nathaniel Felder, a 1971 graduate who was inducted Thursday into the school’s Athletic Hall of Fame, agreed.
Suffice it to say, homecoming 2014 didn’t disappoint.
“My daughter and I enjoy homecoming every year,” alumnus Tina Dunlap said while watching the parade with daughter Gabrielle, 5. “I enjoy coming back to support my alma mater.”
Ditto for graduates John Brown, Randy Richardson, Eric Norman and William C. Chiselom.
“It’s great to be back on campus and to enjoy time with people you went to school with,” Chiselom said. “Livingstone has come a long way, and despite the outcome of today’s game I still am and always will be a proud Blue Bear.”