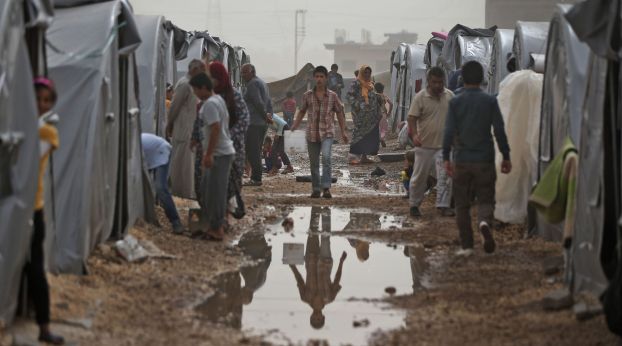 SURUC, Turkey (AP) — Kurdish militiamen are putting up a fierce fight to defend a Syrian town near the border with Turkey but are struggling to repel the Islamic State group, which is advancing and pushing in from two sides, Syrian activists and Kurdish officials said Saturday.
The battle for Kobani is still raging despite more than two weeks of airstrikes by the U.S.-led coalition targeting the militants in and around the town. The strikes, which are aimed at rolling back the militants’ gains, appear to have done little to blunt their onslaught on Kobani, which began in mid-September.
Just outside the Turkish town of Suruc, across the border from Kobani, some 200 people gathered at a cemetery Saturday to bury two Kurdish fighters, a woman and a man, who died in the fighting.
The two fighters— 22-year-old Mujaid Ahmed and 20-year-old Fatma Sheikh Hassan — were laid to rest in two simple wooden coffins. Men took turns heaving shovels of dirt to cover the coffins as women wept. One woman kneeled over a freshly dug grave, tears streaming down her nose as others tried to console her.
Then, the crowd — which included Kurds from Suruc and others from Kobani — broke into song, ending the burial ceremony with chants of “Long live Kobani!”
The Syrian Kurdish border town is the latest focus of the Islamic State group, which has rampaged across northern Syria and western and northern Iraq since the summer, swallowing up large chunks of territory and imposing its reign of terror.
Capturing Kobani, also known by its Arabic name of Ayn Arab, would give the group a direct link between its positions in the Syrian province of Aleppo and its stronghold of Raqqa, to the east. It would also crush a lingering pocket of Kurdish resistance and give the group full control of a large stretch of the Turkish-Syrian border.
Kurds are determined not to allow Kobani to fall and are fighting zealously, but they have not been able to curb advances by the more heavily armed extremists.
On Friday, the militants seized the so-called Kurdish security quarter — an area in the town’s east where Kurdish militiamen maintain security buildings and where the police station, municipality and other local government offices are located.
A senior Kurdish official, Ismet Sheikh Hasan, said clashes were focused in the southern and eastern parts of the town. He said the situation was dire and appealed for international help.
“We are defending (the town) but … we have only simple weapons and they (militants) have heavy weapons,” he said in a call Friday night with The Associated Press. “They are not besieged and can move easily.”
A video posted online Saturday by a group affiliated with the militants showed what it said were Islamic State group militants fanning out in some streets of Kobani amid heavy gunfire. Militants are shown firing rocket-propelled grenades and heavy machine guns. The video appeared to be consistent with AP reporting on the battles.
U.S. Central Command said it conducted airstrikes north and south of Kobani over Friday and Saturday using fighter jets and bombers.
Hasan said U.S.-led airstrikes were not effective, and urged the international community and the United Nations to intervene, predicting a massacre if the militants seize control of Kobani. He also appealed to Turkey to open a corridor that would allow remaining civilians to leave Kobani and arms to enter the town.
Since the Islamic State group’s offensive on Kobani started Sept. 16, more than 500 people have been killed, the Britain-based Syrian Observatory for Human Rights said Saturday. The group, which collects its information from an elaborate network of activists on the ground, said it has documented 20 Kurdish civilians among them, as well as nearly 300 Islamic State militants and 225 Kurdish fighters.
The fighting also has forced more than 200,000 people to flee across the border into Turkey.
Hasan said the Turks were now allowing only wounded civilians to cross the border.
Rami Abdurrahman, the Observatory’s chief, said the town’s Kurdish fighters “are putting up a fierce fight” but are simply outgunned by the militants.