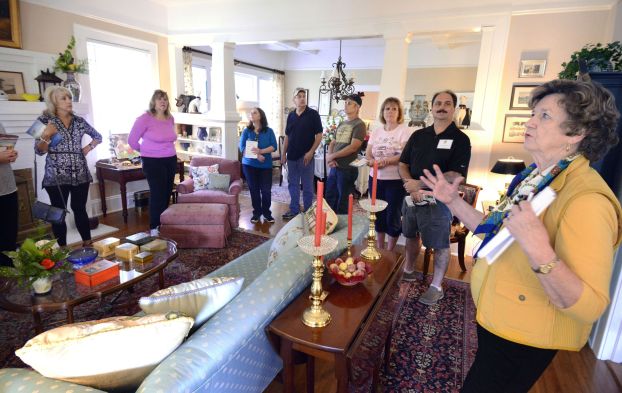 Warm weather and a gently breeze greeted the crowds that came out for the 39th OctoberTour in Salisbury.

People walked or took the trolley down South Fulton Street, up Wiley Avenue and back down Mitchell Avenue to visit 11 historic sites on this year’s tour route.

On the porch at the Bean-Cathey House at 722 Fulton Street, sisters Cathy Marks and Carolyn Haywood, along with their mother and Carolyn’s daughters, had just finished going through the home, which was built in 1905. A Ford Model T sat in the driveway, and people were asked to guess what year it was from — 1924 is the answer.

The family gathered in Salisbury from across the state to go on the tour, and said it’s been a great experience.

“Loving it, absolutely loving it,” Marks said, adding that the community has been very welcoming.

Haywood said she enjoyed seeing the renovated and well-kept homes.

Across the street from 309 Wiley Ave., the E.F. Shumaker House, Don Moore stood in the shade as he worked on an oil painting of the home.

Moore is part of Plein Air Carolina, a group of painters who do their work outside. Moore moved to Salisbury from Statesville eight years ago.

Moore said it would take about two hours to finish his painting.

Farther down Wiley Avenue, a young entrepreneur was selling lemonade to people passing by on their way to the next home.

Six-year-old Lily Cunningham’s stand was set up outside her home. And her father, Keith, was helping her with the business.

This is the first year the Fulton Heights neighborhood, established in the early 1900s, is on the OctoberTour, so the Cunninghams thought it would be a good idea to open up shop.

“There’s a lot of really cool, old houses that people drive by, and I think it’s interesting to see the inside of some them,” Keith said about the tour coming to Fulton Heights.

The neighborhood is bounded by Fulton Street, Heilig Avenue, Ridge Avenue and Boyden Street, according to this year’s OctoberTour guide book.

Lily, who was selling lemonade for 25 cents a cup, said she was having fun. And with a stream of thirsty people heading her way, business was looking good.

Up the road at 618 Wiley Avenue, Rosalie and John Laughlin stood on the back deck of the Jacob-Miller House. The couple, who live on Bank Street, said they go on the tour every year.

Rosalie said she’s glad Fulton Heights is on the tour this year and that the homes are “lovely.”

The Laughlins said the OctoberTour is wonderful for the neighborhoods and brings tourism to Salisbury.

John said it’s good for people who live in Salisbury to have a chance to learn about different parts of town.

Al Dunn, owner of the P.H. Wallenborn House at 628 Mitchell Ave., said he’s worked to get Fulton Heights on the tour. His home, with its granite exterior, is on the tour for the first time.

“I wanted it some years back,” he said, “They did it, and I think it’s worked out well.”

The OctoberTour continues today from noon to 5:30 p.m. Tickets are $30 and can be purchased at the Henderson Law Office at the corner of South Church and West Fisher streets.