Wineka column: The Petreas found love at Wendy’s 38 years ago 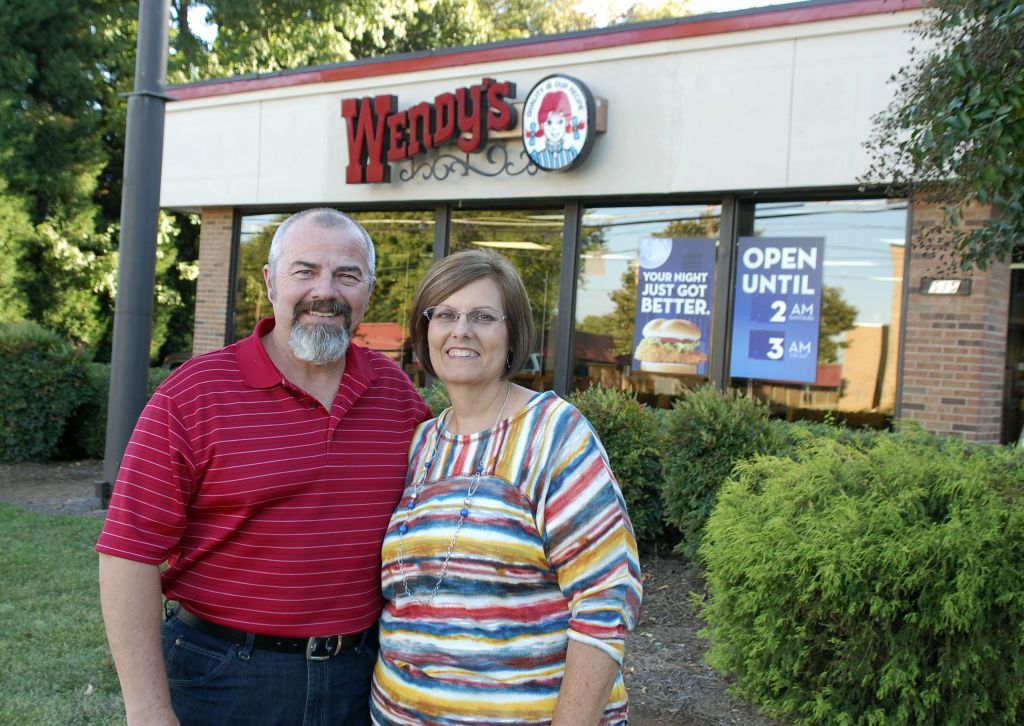 SALISBURY — In the fall of 1976, she was a band member at West Rowan High School. He was a boy in love with cars, especially the Chevelle Supersport he was working on when he wasn’t in class at South Rowan High.
To make some spending money, Chuck Petrea, then 15, obtained a work permit and was among the first employees of the new Wendy’s restaurant, which opened on East Innes Street Oct. 6, 1976.
Weeks later on Nov. 1, Jayne Peeler also went to work at Wendy’s. She didn’t know it then, but it was Chuck’s 16th birthday. They met each other for the first time that day and exchanged their first words outside an employees coat closet in the hall.
Jayne was having trouble with the key, and Chuck offered his help.
“I think he set his eyes on me then,” she said.
Their first official date followed Jan. 22. Jayne was working that day, and Chuck picked her up at Wendy’s after her shift was over. She changed clothes at the restaurant, and the couple went to see “Amityville Horror” at the drive-in on U.S. 601.
The rest is a blur. Jayne became drum major for the West Rowan High band her senior year and graduated in 1978. Two weeks after Chuck graduated from South Rowan High in 1979, the couple wed.
Jayne became a teacher and is now retired after 30 years — most of them at Morgan Elementary. Chuck settled into a telephone company job in 1983 and is a network technician for Windstream, working out of the central office in Rockwell.
The couple have two grown children, Adam and Hannah, and three young grandchildren. If you’re doing the math, the Petreas have now been married 35 years.
And it all started at that Wendy’s restaurant, the same one that will be demolished later this month to make way for a more modern Wendy’s.
Chuck and Jayne couldn’t help but feel a bit nostalgic when they heard the news. Fate steered them to that Wendy’s, and somehow over making sandwiches, tending the grill, running the register and Jayne’s not being able to open the coat closet that first day, love bloomed between them.
“He told me early on he was going to marry me,” Jayne says.
Early on, she actually thought Chuck was a bit brash and maybe too sure of himself. It didn’t take long for him to start asking her out.
“To me, he was a little on the wild side,” she adds, and Chuck’s souped-up Chevelle fed that image. He seemed pretty independent.
But the couple found they were meant for each other, and their attraction took hold, to say the least.
“When it feels right, it’s right,” Chuck says.
ggg
Chuck and Jayne live in Rockwell now. When they heard “their” Wendy’s was going to be torn down, they looked around the house for photographs of themselves as Wendy’s employees but couldn’t find any.
The only piece of memorabilia saved from those days was Chuck’s name tag.
But it’s interesting how much Chuck and Jayne remember from their time at Wendy’s, given each only worked there a year or less. They both recall how busy the place could be over lunch, dinner and with the late-evening crowds.
Single hamburgers were 69 cents then; a single with cheese, 79 cents; and a single with cheese and tomato, 89 cents.
Things were simpler, too: Wendy’s only sold hamburgers, fries, chili and Frosties. The Petreas couldn’t help but notice how the sign out front this week was promoting a new pulled pork sandwich to go with everything else that’s been added through the years.
Both Jayne and Chuck received training in Charlotte before their first days on the job in Salisbury.
They remember the pay being $2 to $2.25 an hour.
The couple say it was fun working at the new restaurant, which was filled with teens as employees and young adults as managers.
Chuck quickly found himself assigned to one of the two grills. He says the hamburgers were delivered fresh each morning, and he would man a machine that made them into patties. He also sliced up fresh tomatoes and broke up the heads of lettuce before getting down to the job of cooking.
Jayne moved from making sandwiches and preparing the fries to working the cash register, pouring drinks and calling out orders over the loud speaker.
Jayne says there were a few times they might not have had their minds completely on work, and she reminds Chuck of a certain batch of runny chili.
ggg
The Petreas think their East Innes Street Wendy’s was the first fast-food restaurant to have a drive-through window in Salisbury.
By the next spring, Chuck quit his Wendy’s job. Instead, he started working the second shift at China Grove Cotton Mills, sometimes after a full day of school.
He learned then he didn’t want to work in a cotton mill. It felt a lot like a prison, he says.
Jayne stayed about a year at Wendy’s before finding part-time work at the Brian Center on Statesville Boulevard. She was a year ahead of Chuck in school. During his senior year at South Rowan, Jayne attended Mitchell Community College before finishing out her undergraduate career at Catawba College as an education major.
Chuck worked as a mechanic at a couple of places before going to work for Mid-Continental Telephone, then Alltel, then Windstream through various buyouts and mergers.
Today, the couple have become Harley-Davidson enthusiasts. Jayne gave Chuck the go-ahead to buy their Harley in 2008.
Over the years, Chuck and Jayne have returned on occasion to the Wendy’s on East Innes Street. How could they not? They can’t help but watch the counter and evaluate what’s going on in the preparation and delivery of food.
“That’s not the way we did it,” Chuck often says.
No, and not many Wendy’s employees end up married with grandchildren, either.
Contact Mark Wineka at 704-797-4263, or mark.wineka@salisburypost.com.