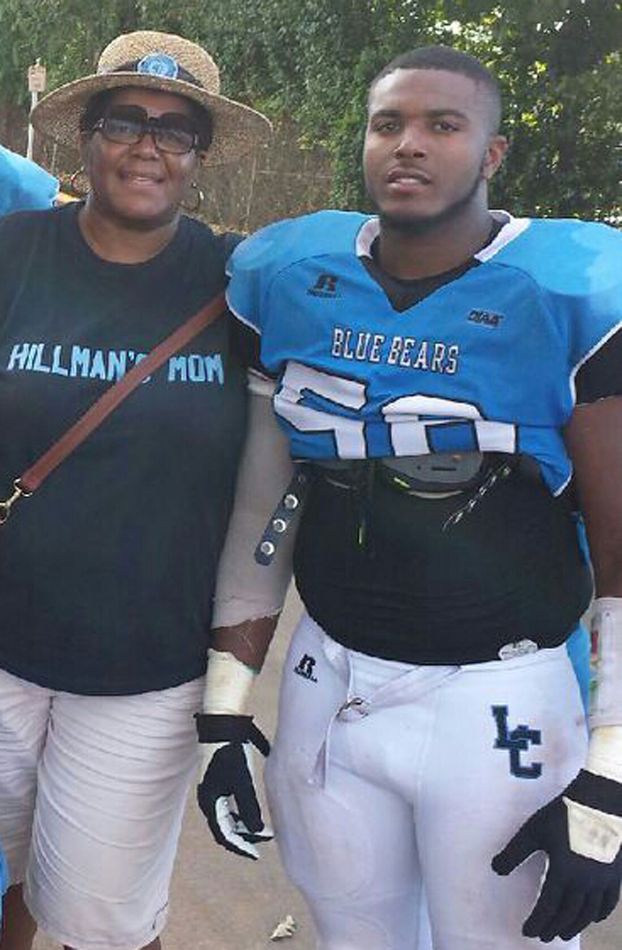 Hillman Evans IV, a defensive end for the Livingstone College Blue Bears, got his start on the gridiron at age 7.
Evans has had winning seasons and losing seasons, played defensive end, fullback and linebacker. But the one constant no matter the outcome of the game or the position he played has been his mother, Marilyn Evans-Bracey, who has missed only two of his games since he first suited up in 1998.
Evans-Bracey will be inside Alumni Memorial Stadium Saturday to watch her son play his last homecoming game at Livingstone.
“I’m feeling sad already,” she said. “He doesn’t want me to cry, but I know I will because it’s his next-to-last home game.”
Evans’ father died when he was just four-months-old, leaving his mother to raise him and his older sister Courtney. As he grew, she placed positive male role models in his life.
One of them, Trent Sanders, introduced Evans to football, but he passed away suddenly earlier this year. Another, Carey Christian, coached Evans at Raleigh Enloe.
“The way Hillman has developed and matured as an individual has been remarkable,” said Christian, now defensive line coach at Rolesville High. “Without question, he’ll be a positive role model for other young men someday.”
Christian’s words are music to Evans-Bracey’s ears.
“I always tell Hillman to give whatever he’s trying to accomplish to the Lord and he can’t go wrong,” she said. “And I tell him to always do his best because that’s all anyone can ask. I’m proud of the way Hillman has performed on the football field, but I’m even prouder that he has excelled with his grades. Young black males face many obstacles in today’s society. Hillman could have gotten caught up in bad things, but I just thank the Lord he stayed focused…”
Evans has a 3.2 GPA, was president of his freshman class, is a member of Omega Psi Phi Fraternity and was named Mr. Livingstone 2013-2014. He’s well known and well liked on campus. Livingstone coach Daryl Williams said he’s been great to coach.
“Hillman readily accepts constructive criticism, is eager to learn and has been a big part of Livingstone’s football team for the past four years,” Williams said. “He’s gotten it done on the field and in the classroom and is the epitome of a student-athlete.”
Livingstone (4-1, 1-1 CIAA enters Saturday’s homecoming game against St. Augustine’s off to its best start since 1998 when the Blue Bears won their second consecutive CIAA championship.
“That this is my last homecoming and next-to-last home game ever is bittersweet, but I’m not going to be sad about it because I was given an opportunity to play college football,” Evans said.
The Blue Bears haven’t won a homecoming game in 17 years, something Evans and other players aim to change. But no matter the outcome, he’s certain of one thing: his mother and other relatives will be in the stands rooting for him.
“She’s always been there for me, and it’s comforting to look up and see her in the stands,” Evans said.
“…My mom tries to find something positive in every situation and always has a smile on her face. Everything I am, everything I’ve accomplished, I owe it to her.”