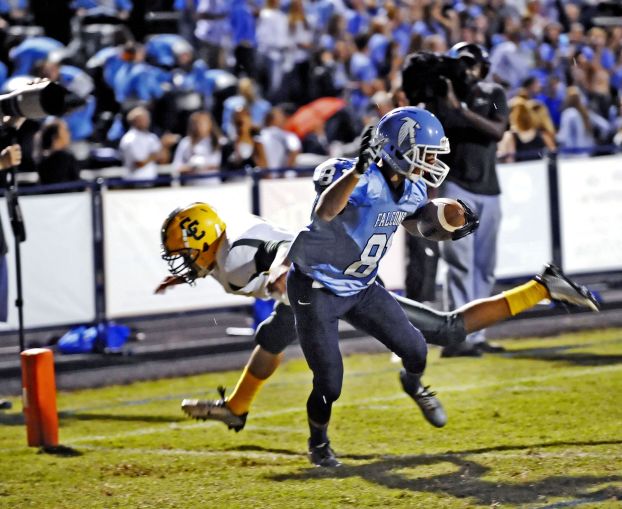 MOUNT ULLA — It will go down in history as the “Calamity in the Cornfield” — or something like that.
West Rowan beat Central Cabarrus 50-31 in South Piedmont Conference football on Friday in a game that ended at 11:30 p.m.
It was the 170th victory of West Rowan coach Scott Young’s career and the craziest of those 170.
“Weirdest game I’ve ever been a part of,” Young said. “The long halftime for homecoming, and then the lightning delay, and then the long injury delay, and then it got really chippy there at the end.”
It also rained along the way.
The Falcons (6-1, 4-0) broke more school records in the passing game. This time it was a brilliant effort by 140-pound receiver Juwan Houston, who had scoring catches of 37, 23, 54 and 45 yards and shattered the school record for a single game with 206 receiving yards. He’s the same guy who had some drops last week when Kortez Weeks was catching everything.
“I stayed after practice every day and worked on catching the ball,” Houston said. “The offensive line blocked, Kacey (Otto) made good throws, and all I had to do was get open.”
Central Cabarrus (4-3, 1-3 SPC) keyed on Weeks and tailback Harrison Baucom. The Vikings’ defense stopped Weeks and contained Baucom, but Houston went off.
West Rowan’s defense dominated. The numbers would look stronger if Central Cabarrus hadn’t scored two TDs in a span of 10 seconds on long pass completions by QB Tyler English in the final minutes.
“We were concerned with stopping their speed outside,” Falcons defensive lineman Derrick Moreland said. “We did a good job of forcing their runs back in.”
Most Central Cabarrus possessions started with a stuffed run for minus-4.
A pick by Quameak Lewis set up a Baucom run for the game’s first TD. A fine punt return by Jovon Quarles gave the Falcons a short field, and Otto hit Houston for a TD and then scored on a two-point conversion for a 15-0 lead.
With the Falcons ahead 15-7 in the second quarter, Otto found Houston for a 23-yard TD on a fourth-and-6.
The Vikings fought back to 22-13 with just 1:36 left in the half and had momentum, but the Falcons struck for a 54-yard TD from Baucom to Houston on a halfback pass for a 29-13 halftime edge. That was the backbreaker.
“We called that one at a good time,” Young said.
The 50-minute lightning delay came midway through the third quarter — shortly after Houston’s fourth TD.
Baucom didn’t play after the weather delay because of a groin injury.
“He’s not just a running back, he’s our kicker and punter,” Young said. “That puts you in a bind.”
West Rowan got rushing TDs from L.J. Robinson and Quarles — a 75-yard run — in the second half.
“That’s the best effort we’ve had,” Young said. “That’s the first time our kids have really come out and played and we won decisively against a good football team.”