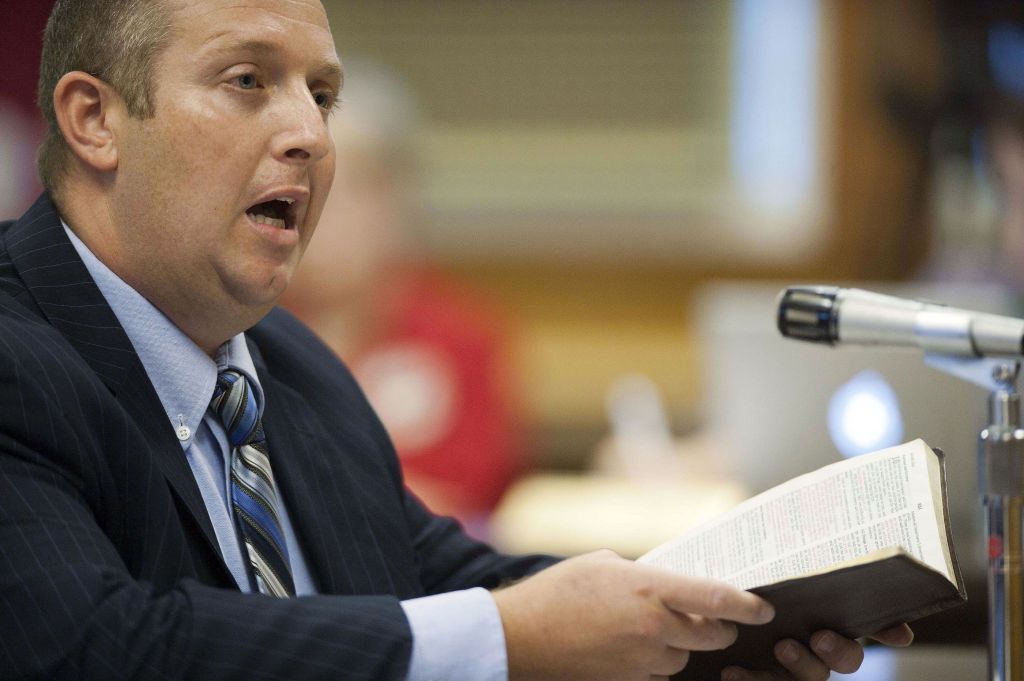 The Rowan-Salisbury Board of Education ruled to keep Bible classes in the district’s elementary schools in tact.
After roughly an hour and 15 minutes of public comment and an hour-long closed session to consult with its attorneys, the board unanimously approved Chairman Dr. Richard Miller’s motion to simply “evaluate and adjust our curriculum to meet constitutional requirements.”
The discussion was in response to a letter sent to Superintendent Dr. Lynn Moody from the Freedom From Religion Foundation calling the district’s elementary Bible classes “flagrantly unconstitutional.”
On Tuesday, Patrick Elliot, an attorney with the Freedom from Religion Foundation, said they would decide whether or not to “proceed with litigation” based on the board’s action.
The organization got involved when a “local complainant” reported that the Bible classes at Cleveland, Woodleaf and Mount Ulla elementary schools taught “troubling teachings” such as seven-day creation and the Bible being “literal fact.”
“We have not changed anything,” Miller said after the meeting.
Vice Chair Kay Wright Norman said the next step is to “start doing our homework.”
“It is about the curriculum,” she said.
Miller said the district’s curriculum department would consult with lawyers and other districts that offer Bible courses to ensure each Bible class curriculum is in line with the United States Constitution.
“We make our best decisions by having great information,” Norman said.
Tara Ludwick, who attended the meeting, said she thought the board’s decision was “great.”
“When you take God out of school, you have a big problem. Can I get an ‘amen?’” she said.
“I think they made the right decision,” Rickeshia Givens said. “My son loves Bible.”
She added that Bible classes factored into her decision to send him to school in the western part of the county.
County Commissioner Mike Caskey wasn’t as thrilled, however.
“I don’t really understand it,” he said, adding that he thought they should have said the curriculum was fine the way it is and fight it if sued.
Caskey pointed at the upcoming school board election as a possible reason for the board members’ decision.
Approximately 30 teachers, students, pastors and community members spoke during public comment – all of whom spoke in favor of the Bible classes.
Trey Palmer, a junior at South Rowan High School, was one of those who addressed the board in favor of the district’s Bible classes.
Although he said he couldn’t speak to the elementary school classes, Palmer said the high school introductory Bible class he took was “objective.”
“It was taught purely as a historical book,” he said.
“The Bible is woven into our history and literature,” Palmer added, saying that what he learned has helped him in other classes.
Sandy Kern, former pastor of Thyatira Presbyterian Church, said the district’s Bible classes are “effective and very important.”
She hasn’t always felt that way, though.
“I was shocked when I found out that Bible was being taught in the public schools in Rowan County,” she said, but added that when she discovered that the classes are elective, taught as history and are in “no way evangelizing,” she had a change of heart.
“I am sick and tired of being told by the minority what’s best for the majority,” said Chairman of the Rowan County Board of Commissioners Jim Sides.
“My friends, we’ve come a long way – the wrong way,” Sides said. “We call evil good and good evil.”
He added that if the school board is willing to use tax payer money to sue the county commissioners over the central office, they should be willing to use tax payer’s money to hire lawyers to defend the district’s Bible classes.
Steve Milem, president of the West Rowan Bible Teaching Association, said the group is “in favor of a compromise.”
He added that the group plans to continue funding the salaries for three Bible teachers, and encouraged the board to “evaluate and adjust curriculum” so it could stay in the school.
Tamara Morgan said the Freedom From Religion Foundation’s argument that allowing students to opt out of Bible classes segregates them is unfounded.
The retired Rowan-Salisbury educator said students are pulled out for all sorts of things, such as reading groups, tutoring and special classes.
“We are already segregating,” she said.
Karen Foster is currently a teacher at one of the elementary schools that offers Bible classes.
“Our Bible history teacher is a consummate story teller,” she said, adding, “I’ve never heard a legal line being crossed.”
“This foundation is no foundation at all,” said Jason Josey, pointing out that the Freedom from Religion Foundation has 21,000 members across the nation, less than one-seven-thousandth of the country’s population.
He added that if the school board decided to remove Bible classes from the school system, Gay-Straight Alliance clubs should also be removed.