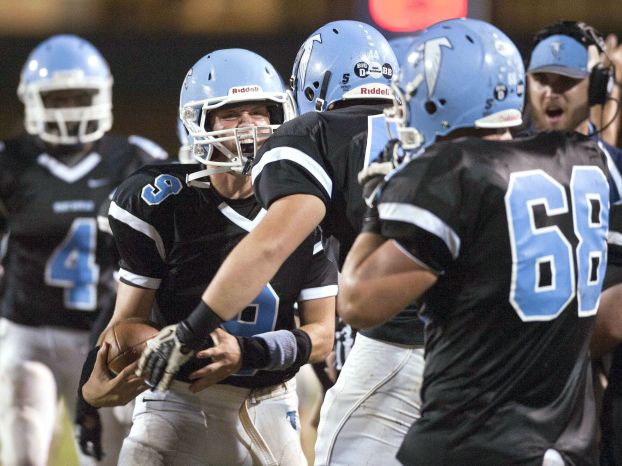 No time to look back

MOUNT ULLA — West Rowan had every right to celebrate its exhilarating, come-from-behind victory over Carson. After running back Darren Isom scored on a seven-yard run in which he dragged a West Rowan defender to the end zone and put Carson ahead 16-0 early in the second quarter, the Cougars looked like they were going to cruise to a crucial South Piedmont Conference win over their rival.

The only thing West Rowan had on its side was time. The Falcons worked their way back into the game and came back to win 43-37 in double overtime. It was a record-setting performance by quarterback Kacey Otto and a great night for receiver Kortez Weeks.

The celebration should not have — and head coach Scott Young said it didn’t — lasted long. Here’s why.

The Falcons (5-1, 3-0) are essentially tied for first with Concord (6-0, 4-0) in the South Piedmont Conference. Central Cabarrus (4-2, 1-2) is tied for fourth. The Vikings, however, have already played Concord and Hickory Ridge — two solid contenders for the conference title and playoff berths. The Falcons have yet to play either.

A win this week helps the Falcons’ chances for a run at a league title and a potential playoff spot while effectively — not mathematically — pushing the Vikings out of the running for a league championship.

“One loss? You might could contend for a conference title,” Young said. “Two losses? You might could even share it or even get a [No.] 2 seed [in the playoffs]. But if you get three losses, you’re pretty much out of it.”

So, while the win over Carson was great for the team and made for a hell of a night in Mount Ulla, the season is better served with a win this week against another competitor for a playoff berth. That mentality was there this week in the cornfield.

“We’ve been preparing all week, Monday through Thursday, playing hard and going hard in practice, getting ready for Friday, and (coming) out ready to play,” Weeks said.

Being able to flip from week to week is something Young has preached to his team from the beginning of the year.

“We talked to our kids from way back because of the conference and how it is — and there really is no weak teams — we got to be able to put that win to bed and get prepared on the next week,” Young said. “We watched that film Monday. We enjoyed it and had a good time. We went right to work as soon as we watched that Carson film and went right into game planning Central Cabarrus. They’re pretty good.”

Wednesday’s practice was one of the best the Falcons have had in 2014, Young said. It’s a sign the young Falcons are learning how to contend for, and possibly win, a league title.

“Maybe they’re starting to understand that 5-1 is probably close to where we wanted to be,” Young said. “If we can get to 6-1, that makes every game that much bigger.”