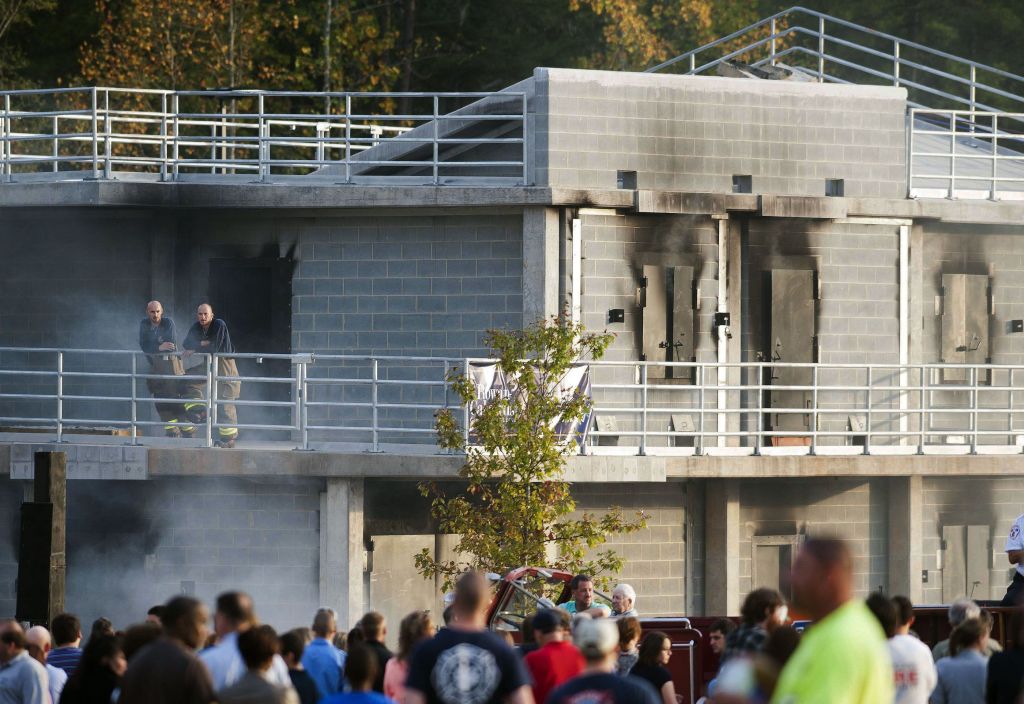 Rowan-Cabarrus Community College’s new fire and emergency training facility is officially open for business.
The college celebrated the facility’s grand opening and dedication Tuesday at FireFest.
“We wanted people in the community to really feel what goes on here — and have some fun, too,” said Paula Dibley, director of college relations, marketing and communications.
The celebration included rescue demonstrations, a helicopter landing, children’s games, K-9 demonstration and free food.
Firefighters and rescue squad members rescued two live “victims” from a minivan using the Jaws of Life, and demonstrated a high line rescue from the top of the new burn building.
During the K-9 demonstration, Ann Morris, the college’s dean of corporate and continuing education, took part in the drill by posing as a perpetrator. She dressed in a heavily padded suit, and the K-9s were given commands to attack or back off.
A helicopter landed in an adjacent field right at dusk, and visitors enjoyed hotdogs, chips and ice cream as they perused around the grounds looking at retired, antique fire trucks as well as up-to-date equipment.
Children enjoyed Landis’ mobile fire safety smoke house and a number of games.
“We wanted this to be a kid-friendly event,” Dibley said.
Brittney Shipp attended FireFest with her husband and three sons.
“We thought the boys would really enjoy it, and my husband is a firefighter,” she said.
Her 7-year-old, Jayven, said his favorite part was watching firefighters rescue two people from a minivan with the Jaws of Life.
He added that he and his 3-year-old brother really enjoyed the smoke house as well because “it was really, really smoky.”
“They went through it like 10 times,” his mother said.
Although no official attendance numbers were available, Dibley said attendance was higher than expected, adding that the college purchased 1,000 hot dogs.
According to Kannapolis Fire Chief Tracy Winecoff, most of the Rowan and Cabarrus fire departments and rescue squads were represented at the event.
The training facility was built with funds from the $12 million Rowan County bond passed in 2010.
The facility contains a 3,500-square-foot burn building, training pads, and a variety of props, including railroad cars and tractor-trailers. A driving course will eventually be added to the facility.
The college started using the burn building for training scenarios early this summer, and held its first live burn in August.
Winecoff said the burn building includes “advanced technology,” adding that up until it was built, all the training options in the area were incredibly outdated.
Roger McDaniel, director of emergency services for Rowan-Cabarrus, said firefighters from all over the state and even some from Virginia have already taken advantage of the facility.
Contact reporter Jeanie Groh at 704-797-4222.