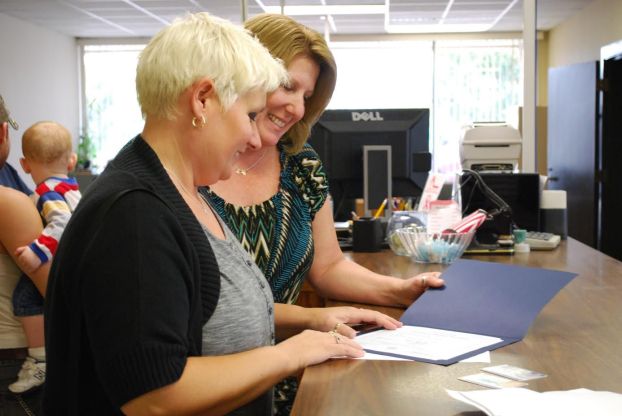 For any couple, a quarter century of partnership is an occasion to celebrate. But for their 25th anniversary in five months, Tamara Sheffield and Maryja Mee hope to frame their years together in a milestone of an even greater magnitude.
“We would most like to see marriage equality in the state of North Carolina when we have our 25-year anniversary in March,” said Sheffield. “That would be very nice to see.”
With the U.S. Supreme Court’s rejection of appeals arguing the unconstitutionality of gay marriage from five states on Monday, North Carolina will likely have its ban on gay marriage overturned in the coming weeks.
And so it was with gratitude for their own success and hope for all gay couples in the state that Tamara Sheffield and Maryja Mee filed their marriage license at the Rowan County office building in Salisbury on Tuesday. Also filing their marriage paperwork were Dr. Frank Labagnara and David Garling, another Salisbury couple.
“There is no way we could have timed our filing this well,” said Sheffield of the political backdrop for their trip to the Register of Deeds. “Although we weren’t impacted — Virginia was — it’s just a matter of time until they’ll rule on marriage equality in North Carolina.”
North Carolina is in the same 4th U.S. Circuit as Virginia, whose same-sex marriage prohibitions were struck down in July of this year by the 4th U.S. Circuit Court of Appeals. The U.S. Supreme Court’s refusal to hear the appeals this week solidifies the 4th Circuit Court’s ruling and legalizes same-sex marriage in Virginia, Oklahoma, Utah, Wisconsin, and Indiana.
For Sheffield and Mee and Labagnara and Garling, the act of filing their federally recognized marriage licenses in Rowan County will not at present give them additional rights in North Carolina. Despite this, it is a critical step in the journey towards marriage equality, Sheffield said.
“It’s a matter of making it public record, so that North Carolina knows that there are married couples in this state who need recognition,” said Mee.
According to James Furr, assistant register of deeds, the two couples Tuesday morning were only the second and third same-sex couples to register in Rowan County to date that he is aware of.
Almost one year ago, prior to their legal marriage in the state of New York and just months after Section 3 of the federal Defense of Marriage Act was repealed, Sheffield and Mee made the same trip to the Register of Deeds to request a marriage license. They went to raise awareness of North Carolina couples who desire marriage equality, knowing that they would be denied.
“And so for what we’re doing today, it makes it all come full circle,” said Sheffield.
For most of their years together, Sheffield, 44, and Mee, 46, never even considered marriage as an option.
“On our 20th anniversary, we had a ceremony at the train station in Salisbury, thinking that the chance of a legal marriage was still a long way off,” said Sheffield. “Just like every other couple wants to do, we stood up before family and friends.”
And then in a twist of fate, Sheffield and Mee entered the American Civil Liberty Union’s “My Big Gay (Il)legal Wedding” contest in January of 2014. The first event of its kind for the ACLU, it drew hundreds of couples living in states without marriage equality to compete for the most votes, with five couples winning $5,000 each from the ACLU towards their dream wedding.
“They were trying to step out of the court room and make a softer statement, bringing about change differently through the contest,” said Mee of the ACLU.
Sheffield and Mee were just shy of their goal of 24,000 votes — in honor of their 24 years together — but came in with more votes than any other couple in the nationwide competition. The support from the Salisbury community was overwhelming, they said.
“The contest took on a life of its own,” said Sheffield. “People that recognized us would yell across the street, ‘I’m voting for you! Good luck!’”
Earlier this year, the couple climbed aboard a train in downtown Salisbury for the 13-hour train ride to New York City, where they were legally married on March 13. The ACLU ceremony followed on April 27.
“Our marriage validated us as a couple, as people in this community,” said Sheffield.
Sheffield works for Frito-Lay as a senior key account manager, and Mee is a category analyst for Food Lion. The women have lived in Salisbury for over 21 years, and both are active in the Salisbury Pride organization.
“People should know that we’re no different from any other couple,” said Sheffield.
In addition to North Carolina, other states in the 4th Circuit likely to legalize same-sex marriage in the coming days include Colorado, South Carolina, Kansas, West Virginia and Wyoming.
“A lot of our friends who want to marry in North Carolina are holding tight, thinking it’ll happen soon,” said Labagnara.
The speed at which the same-sex marriage bans are being overturned has come as a welcome surprise, Mee said.
“Chances are, in a few short weeks everybody can marry in this state,” said Sheffield. “I feel excited. I feel hopeful.”