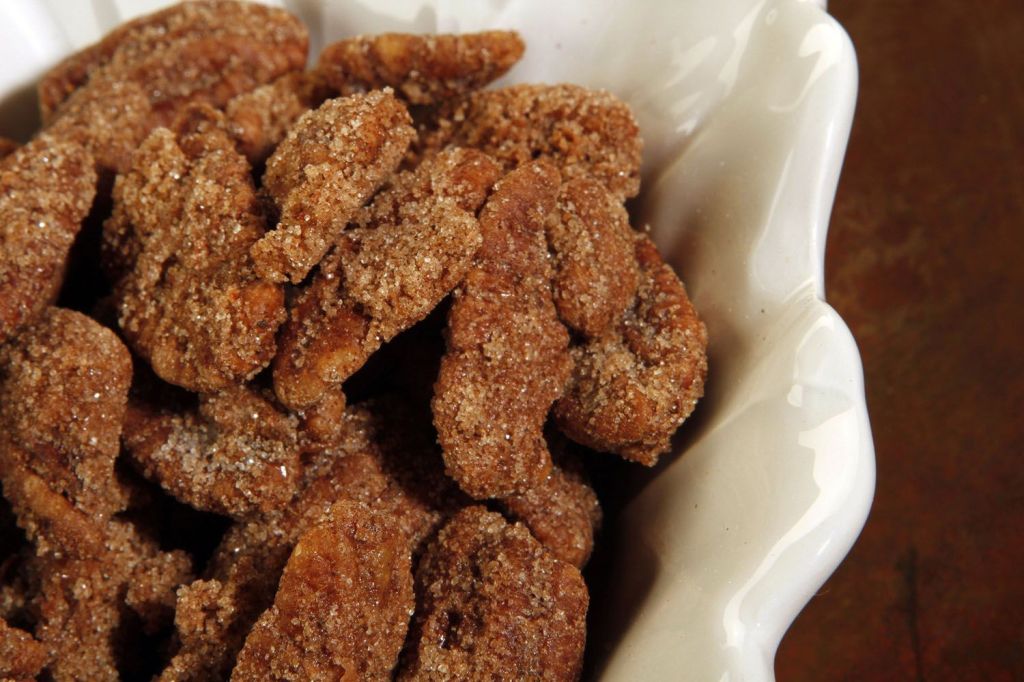 It’s officially fall. And for many, the seasonal change has nothing to do with the weather or a date on the calendar. Fall is here because Starbucks is once again offering its signature pumpkin spice latte.

Never mind that the iconic latte doesn’t actually contain any pumpkin. The signature flavoring is all in the spice blend. And it works. Starbucks has sold more than 200 million of the popular drinks since its introduction in 2003.

The exact blend varies. Cinnamon. Nutmeg. Ginger. Allspice. Perhaps a little clove. Maybe a touch of mace. But while pumpkin spice may be most closely associated with pie, it’s far from a one-trick pony. Once relegated to candles, lotions and potpourri, it’s become the seasonal darling of the food world, flavoring coffee, gum, doughnuts, chips, creamer and more. Even Oreos have entered the fray.

Admittedly, some flavor pairings are better or, perhaps, more natural than others.

Take candied nuts. Pumpkin spice has warm, earthy notes, and the blend pairs perfectly with nuts, particularly pecans. To candy the nuts, simmer a pound or so of pecans in simple syrup until softened, then toss them in sugar flavored with pumpkin spice. Spread them out on a baking sheet and gently toast until completely dried. The nuts make a great snack on their own, though they also lend great crunch and flavor to fall salads. Or toss them with dried fruit for a simple party or trail mix.

And take French toast. Where most recipes are flavored simply with cinnamon, add a pumpkin spice blend, along with pumpkin puree, to the custard base. Soak thick slices of brioche or challah bread in the mix, and fry the slices up. It almost tastes like you’re eating pumpkin pie for breakfast.

A quick note on canned pumpkin puree. While a great pumpkin can yield great homemade puree, I often reach for canned when fixing a dish. It is readily available and consistent in flavor, texture and moisture content, whereas actual squash varies.

Pumpkin spice works equally well with savories. In fact, add a little garlic, lime and hot chile to the standard pumpkin spice blend and you already have the start of a great Caribbean marinade.

Pork pairs particularly well with pumpkin spice. Combine the spice blend with a little garlic, maple syrup and oil, and rub the mixture over a couple of pork tenderloins. Roast the tenderloins with apples, then serve alongside a pumpkin risotto if you want the squash, as well as its seasonings, represented in the meal.

This may sound heretical, but I’m not the biggest pumpkin spice latte fan. Instead, I love adding the spice to cocktails when the season is right. One of my favorites is a take on Gray Kunz and Peter Kaminsky’s excellent egg nog in “The Elements of Taste.” Egg yolks, sugar and rum are cooked to a creamy zabaglione-like custard, then folded together with pumpkin spice meringue and whipped cream for a light and fluffy take on the holiday drink. Finally, whisk in pumpkin puree for a fall drink that’s a perfect way to toast the spice blend of the season.

2. In a large saucepan, combine 3 cups sugar, water and pecans. Bring to a simmer over high heat, then reduce the heat to maintain a gentle simmer, and cook the pecans until softened, about 10 minutes. While the pecans are simmering, combine the cinnamon, ginger, nutmeg and allspice in a small bowl, along with the remaining 1 cup sugar.

3. Drain the pecans (discard the pecan simple syrup or save for another use), and place in a large bowl. Sprinkle over the spiced sugar and toss to coat the pecans completely.

4. Spread the pecans on a parchment-lined rimmed baking sheet. Toast the pecans until the sugar is hardened and the pecans are dried through, 40 to 60 minutes, tossing every 10 minutes or so.

5. Cool the pecans on the baking sheet. The pecans will keep up to 2 weeks stored in an airtight container in a cool place.

such as challah or brioche,

grade B, as desired

1. In a medium bowl, beat the eggs. Whisk in the cream and pumpkin puree, then the vanilla, sugar, cinnamon, nutmeg, ginger and allspice. Pour the batter into a wide, shallow baking dish.

2. Soak the bread slices in the egg mixture on both sides, 1 to 2 minutes per side.

3. Heat a large, heavy-bottomed skillet over medium heat until hot. Melt butter or bacon fat in the hot pan, then add 2 slices of the bread. Reduce the heat and fry the slices gently on each side until the bread is crisp and golden brown, and the inside of the bread is cooked through, 3 to 4 minutes per side. Cover the pan while cooking so the bread toasts evenly and thoroughly.

4. Remove the toast and hold on a baking sheet in a warm oven until all of the slices are toasted. Repeat with the remaining slices.

5. Slice the toast and divide it among four plates. Dust each serving with powdered sugar, if desired, and serve with warm maple syrup.

1. In the bowl of a stand mixer, or in a large chilled bowl using a hand mixer, beat the cream to stiff peaks, about 3 minutes. Cover and refrigerate until needed.

2. In a large bowl, whisk together the egg yolks and one-half cup of sugar until combined and frothy. Whisk in the rum.

3. Set the bowl over a large pot of simmering water, making sure the bottom of the bowl does not touch the water. Continue to whisk until the mixture increases in volume and thickens, 3 to 5 minutes. Remove the bowl from heat and place it over a large bowl of ice water, whisking to cool the mixture. Refrigerate until needed.

4. In the bowl of a stand mixer, or in a large bowl using a hand mixer, beat the egg whites until frothy. Gradually sprinkle over the cinnamon, allspice, nutmeg, ginger and the remaining 2 teaspoons sugar, a little at a time, and continue to beat until stiff peaks form. In a separate bowl, whisk together the milk and pumpkin puree until smooth. Set aside.

5. Fold the whipped cream gently into the chilled egg yolks, then, again very gently, fold in the beaten egg whites and milk mixture, each a little at a time, until incorporated. Refrigerate until ready to serve. To serve, pour into chilled glasses or eggnog cups (or demitasse cups), with a stick of cinnamon or pinch of nutmeg. The cocktail will keep for 1 day, covered and refrigerated.

plus more as needed

1. Heat the oven to 425 degrees. In a large bowl, combine the 3 tablespoons olive oil, garlic, cinnamon, nutmeg, ginger, allspice, salt and maple syrup. Add the tenderloins to the bowl and toss them with the spice mix to coat.

4. Place the pan in the oven and roast until a thermometer inserted in the center of the tenderloins reaches 140 degrees, 20 to 25 minutes, or to desired doneness.

5. Remove the pan from the oven and remove the tenderloins and apples from the pan to a platter or cutting board to rest. Place the pan on the stove over medium-high heat. Deglaze the pan with the white wine, scraping the bottom of the pan to dislodge any browned bits. Stir in the chicken broth and simmer until the sauce is reduced by about two-thirds and slightly thickened, about 3 minutes. Remove the pan from heat and stir in the butter bits to further thicken the sauce and add a nice sheen.

1. In a medium saucepan, bring the vegetable broth to a simmer over medium heat.

2. Meanwhile, in a large heavy-bottomed pot or Dutch oven, melt the butter and olive oil over medium heat. Stir in the onion and garlic, and cook, stirring frequently, until the onion is translucent and just begins to color, 8 to 10 minutes.

3. Stir in the rice and nutmeg and cook, stirring frequently and coating the rice with the fat, until the rice just begins to toast, about 3 minutes.

4. Add the wine and continue to stir, cooking until the wine is mostly absorbed.

5. Add a ladleful of broth and cook, stirring constantly, until the broth is almost completely absorbed. Continue adding an additional ladle of broth as each is absorbed by the rice.

6. After 10 minutes of cooking the rice, stir in 1 cup of the pumpkin puree with another ladle of broth. Season with one-half teaspoon salt and a pinch of pepper.

7. Continue cooking the rice, stirring in additional broth as needed, until the rice is slightly al dente, about another 10 minutes.

8. Stir in the remaining puree, the chopped walnuts and 2 tablespoons walnut oil. Season as desired, and stir in additional broth as desired for a creamy consistency. Serve each portion with a light drizzle of walnut oil and a sprinkling of freshly grated cheese.

Yesterday: Woodleaf men commuted to Spencer in a hearse