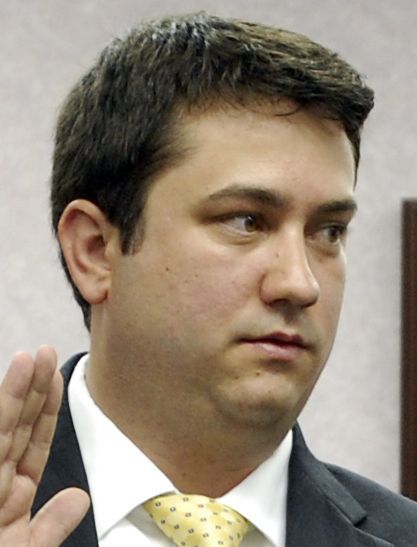 GRANITE QUARRY — The Granite Quarry Board of Aldermen has hired M. Justin Price as town manager.
Price, 30, has been assistant town manager and planning director for the town of Troy over the past four years. Granite Quarry Mayor Bill Feather swore him into his new position Monday night.
Feather said the town had six applicants for the job and interviewed five “good candidates,” making the decision a tough one. But the board especially liked Price’s planning and fiscal background.
The board involved members of the community and staff from the city of Salisbury in the interview process.
Price earned his master’s degree in public administration from Appalachian State University and an undergraduate degree in political science from the University of North Carolina at Chapel Hill.
He said he considers Denver (N.C.) his hometown.
Price’s starting salary is $57,000 a year.
“I think he’ll do a great job,” Feather said.
The board members presented retiring Town Manager Dan Peters with a plaque in appreciation for his years of service, and Feather praised Peters’ devotion and work for the town.
For the last several work days, Peters has been working with Price at Town Hall. Price’s wife, Ashleigh, accompanied her husband to Monday night’s town board meeting.
Much of the rest of Monday night was devoted to discussion about a proposed access road on county property off Heilig Road for Gildan Yarns. This summer, Granite Quarry annexed roughly 93 acres of county-owned land in this area at the county’s request.
The cul-de-sac road will serve up to 35 trucks a day making deliveries to the Gildan Yarns plant. It will not be the plant’s primary entrance.
Both the Planning Board and Board of Aldermen held public hearings Monday on the road. In the end, aldermen agreed to waive standard requirements for curbing and gutter and a 5-foot-wide sidewalk on at least one side of the access road.
But the town will require a 32-foot-wide ribbon road with 2 feet of flush or flat curbing on each side. The town also wants some considerations for street lighting and asked staff to meet with the N.C. Department of Transportation to work out some solution.
Alderman Mike Brinkley said he thought the flat curbing, which is not something the DOT usually does, would give the road more of a finished look.
RowanWorks, the county’s economic development arm, had asked for the regular requirements of curbing, guttering and sidewalk to be waived in consideration for a deeper, wider road built for heavy truck traffic.
Robert Van Geons, executive director of RowanWorks, said the 2,729-foot-long road would be grant-funded and designed, permitted and built by the DOT.
But if engineers had to go back and redesign the project for sidewalk, curb and gutter, the delay would be at least four months, with an additional construction cost of about $600,000, Van Geons said.
There was some reluctance among aldermen when it finally came down to granting much of what the EDC wanted. Brinkley said the town should have been brought into the process sooner.
“I just kind of feel like we’ve been pushed into a corner,” Alderman Arin Wilhelm added.
Wilhelm said he didn’t want to hurt the town or Gildan Yarns, but “I feel like I’ve been bulldozed.”
Brinkley would not let Van Geons go without letting him know he thought the town had been excluded, misled, lied to and portrayed unjustly as obstructionists.
And Brinkley said the EDC had done everything it could over the years to keep that particular industrial property out of Granite Quarry.
Van Geons vehemently disagreed and said his integrity was impugned, but Feather gaveled the discussion closed and Van Geons could not respond further.
Brinkley said Granite Quarry’s interest and stake in that Heilig Road/Julian Road area goes back to the 1990s and that Granite Quarry had made sizeable investments in utilities there.
In exchange for Draftex’s being connected to water-sewer, there was an agreement the company’s plant would be annexed into Granite Quarry within 14 years, Brinkley said.
But Draftex went out of business, and the plant was never annexed. In essence, Brinkley said, Granite Quarry taxpayers paid handsomely for utilities in that area but have never gotten anything back in return. (Salisbury-Rowan Utilities took over the lines years ago.)
Brinkley put the loss in revenues to the town at millions of dollars.
Several citizens spoke at the Planning Board public hearing, held before the aldermen’s own hearing.
John O’Reilly, who lives in the Gables development off Faith Road, said sitting in his backyard and hearing the noise coming from the Gildan plant was “like sitting next to a bus station.”
Bart Allen, whose mother lives in this area, expressed concern about the topography and how the new road will drain.
“It’s going to be a lot of water — with nothing to catch it,” he said after the hearing.
Progress is inevitable, Allen added, but it can happen in ways that blend in with the surrounding environment.
Though he recognized Monday’s hearing was about the road, Planning Board member Buddy Poplin said he was concerned about the noise nearby residents have complained about and expressed hope the company could assist them by providing some kind of buffers.
“I wouldn’t want to be there at 3 o’clock in the morning and be kept awake either,” he said.