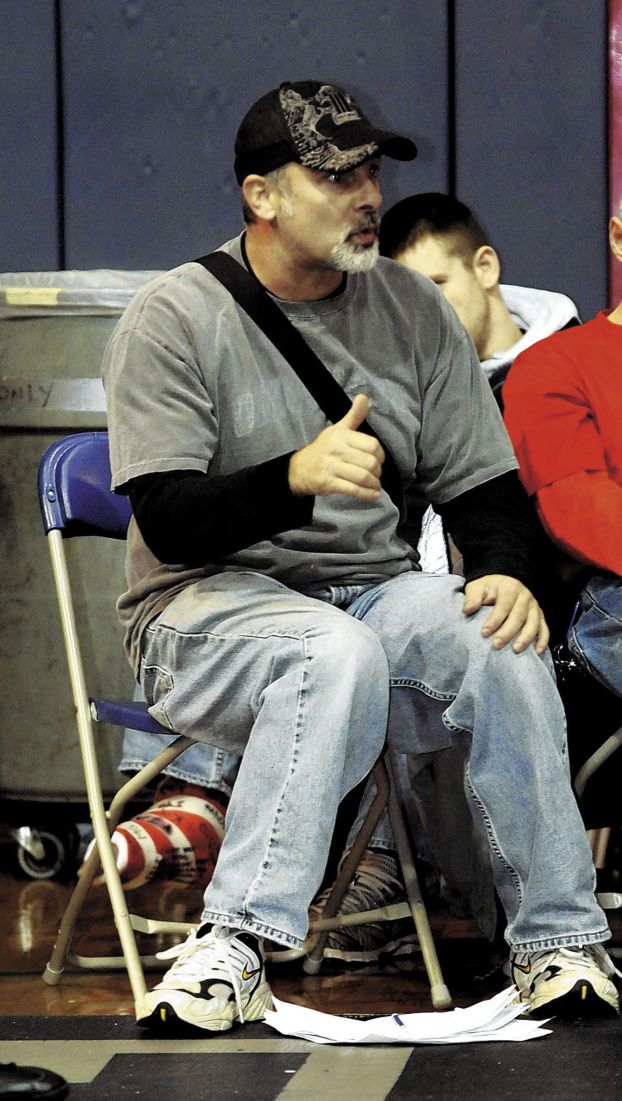 LANDIS — There can’t be many art teachers in the U.S. who get interrupted in the middle of a lecture on ceramics by wrestlers seeking advice on half nelsons.
Wayne Freeman has worn that unusual combination of hats as art teacher/wrestling coach a long time at South Rowan. He’ll continue to teach, but when wrestling season rolls around, he won’t be on the Raiders’ bench for the first time in 22 seasons.
“I guess I’ve done wrestling longer than anything else I’ve done,” Freeman said. “I started in ninth grade. I competed a long time. I’ve coached a long time. It’s going to be different.”
Freeman grew up in Greensboro, went to Northwest Guilford High and became fascinated with wrestling.
“You’d go over to Ragsdale or Southern Alamance, anywhere you had a chance to pick up something new,” Freeman said. “I tried to pick up everything I could about the sport.”
When his family moved to Rowan County, Freeman became a key part of East Rowan’s 1975 WNCHSAA championship team. The Mustangs won the title for the first time and became only the third Rowan winner. Greg Lowe and Freeman were East Rowan’s individual champions that year. Freeman decisioned a Watauga wrestler in the final to finish an undefeated season at 119 pounds. Ironically, Freeman’s greatest high school moment on the mat came at South Rowan, the host for that 1975 WNCHSAA tournament.
Freeman went on to wrestle at Clarion, a Pennsylvania school in a wrestling hotbed. It was unusual for Clarion to have a North Carolina recruit, but Freeman excelled. He started his last two years.
Five years in Pennsylvania changed the direction of Freeman’s life. He met communications major Diane Hebrank at Clarion. They were married in 1981.
Freeman coached and taught for a year at Oklahoma Baptist, but there were job opportunities that paid more than teaching. He came home and spent three years outside the wrestling arena.
“That gave me time to build a house, but then I got a call from (noted wrestling coach) David Rothwell,” Freeman said. “He wanted me to come work with him at Statesville, and I got back into wrestling.”
Freeman worked with Rothwell eight seasons, and Statesville won a state championship.
“I drove back and forth to Iredell County for years, but then Jim Christy, South’s wrestling coach, moved to assistant principal, and they offered me a chance,” Freeman said.
Freeman has been on the job at South Rowan ever since, a fixture on the mat as well as the art room, where he’s produced pottery and ceramics that would’ve been on the podium if they held state tournaments.
Freeman is stepping down now because of the advice of doctors. He’s had multiple knee surgeries. He shook off a knee surgery in 2012, but when he had another one back in the spring, he was advised to get a knee replacement and give up coaching.
“Doctors kind of put that on my plate last spring,” Freeman said. “But I’m not really ready for the pasture yet. I can still do some things. I’m on the waiting list for the knee replacement, but I’m still teaching.”
Freeman is not sure what his won/lost record is. He’s never emphasized wins and losses. What he has emphasized is preparing wrestlers for the state tournament.
“Wrestling is a two-fold sport,” Freeman explained. “It’s an individual sport, then it becomes a team sport, and there at the end, it goes back to being individual again at the state tournament, That’s what it’s always been about for me. How many kids could we place in the state? How many kids could we put on that podium? You try to be there for the kids through the rough spots because there’s always rough spots, but when you see them get on that podium, you feel good for them. On the other hand, if they don’t place, you don’t sleep because you wonder if you might’ve done something different.”
Freeman has coached 30 years in the North Carolina high school ranks. He’s coached 29 state placers and five state champions. He’s quietly proud of those numbers.
He’s coached good wrestlers in his own family, sons and nephews. Two of his nephews (Swinsons) wrestled for Robinson but got started in the sport as 5-year-olds in Freeman’s South Rowan camps.
“Wrestling got better and better in this state because more guys that UNC and N.C. State recruited to wrestle from up North, stayed down here and started coaching,” Freeman said. “When the coaching got better, the kids got better. It was a lot harder for my kids to win than it was for me.”
Freeman’s last coaching season produced a state champion — Logan Durham.
“I was very proud of every placer we’ve ever had and I wouldn’t put one above the other,” Freeman said. “But Logan’s championship was nice because we hadn’t had one in a while.”
Freeman admits there was intitial sadness when he was advised to leave wrestling behind, but he was excited when principal Kelly Withers informed him his replacement would be Josh Yost. Yost is one of those South Rowan athletes who climbed the podium for Freeman in the mid-1990s.
“I don’t know that I’ll be at the South matches because it might be too hard for me to just watch,” Freeman said. “But I’ll help Josh with words if I can.”
Teaching without coaching will be a change for Freeman. For the first time in decades, he’ll hand out art assignments without listening for the knock of wrestlers at his door.
“It’s a great relief, a burden off my back to know Josh is coaching the team,” Freeman said. “South Rowan wrestling has been a big chunk of my life. Now I can leave it with peace of mind.”