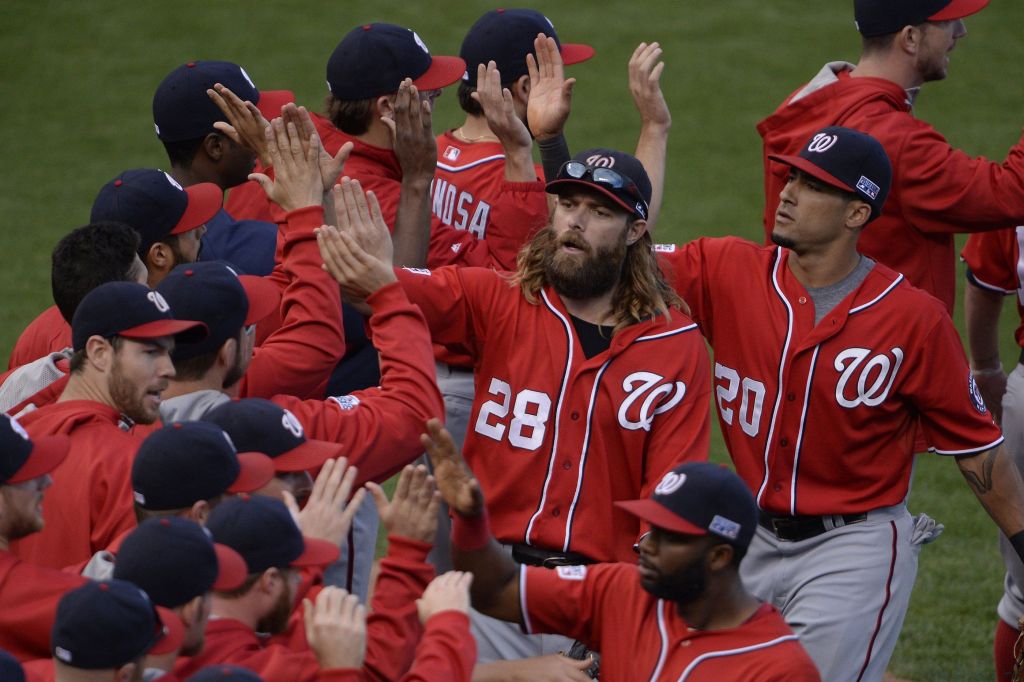 By Carl Steward
San Jose Mercury News
(MCT)
SAN FRANCISCO _ As he demonstrated in Game 2 while petulantly arguing balls and strikes, there’s still a child side to 21-year-old mega-talent Bryce Harper.
But the Harper the Giants saw in Game 3 was all grown man. Some might say Superman.
Harper’s mammoth home run off Jean Machi in the ninth inning was frosting on the Washington Nationals’ 4-1 victory in Game 3 of the NL Division Series at AT&T Park. But it was the two remarkable catches he made in left field that frosted the Giants, and for good measure, he drew the pivotal walk in front of Wilson Ramos’ bunt that broke the game open in the seventh.
With runners at first and second and one out in the second inning, Brandon Crawford ripped a ball into left-center that looked like it might be a two-run double. But Harper, fighting a brutal sun, raced back and made a very tough catch up against the fence.
“Off the bat, I knew I hit it well, so I was hoping it would find the gap and maybe hit off the wall,” Crawford said. “He made a great play on it.”
Harper wasn’t sure if he could get it.
“Having to deal with that sun, it was very tough,” Harper said. “You just try to battle out there, make some catches and not let them score.”
Mission accomplished. Giants manager Bruce Bochy said it was a huge early turning point that allowed Washington starter Doug Fister to settle in.
“I thought Crawford’s ball was in there,” Bochy said. “That’s a game-changer. Harper made a good play, and then he made another good one later.”
The second grab occurred in the seventh inning after the Nationals had broken through with three runs. Brandon Belt opened the bottom half of the inning with a single and advanced to second on a Crawford grounder. Travis Ishikawa lofted a soft fly in short left-center that looked like it would drop and score Belt.
But Harper steamed over and plucked the ball just before it hit the grass. It effectively ended that rally.
“You never know what could have happened if that ball drops in and we score,” Ishikawa said. “Hats off to him. He made some incredible plays today.”
Nationals center fielder Denard Span couldn’t decide which play was better.
“Because of the sun, that first one was an unbelievable play,” Span said. “It saved a couple of runs, it kept us out of a long inning, and it kept us in the ballgame. On the second one, I thought the ball was going to drop for sure. I was going to cut it off, and then he came out of nowhere and was able to pick the ball right before it hit the ground.”
Washington manager Matt Williams knows how brutal the sun can be in San Francisco in midafternoon, so he had nothing but praise for the impact of Harper’s catches. They were bigger than his home run, he maintained.
“First and foremost, he was great defensively,” Williams said. “He went up against the wall and made that with a couple guys on that could have changed the game for us.”
Then came the homer in the ninth, a bomb onto the arcade off Machi that made it 4-0. It was Harper’s third career postseason homer and second in this series, all accomplished before age 22. Only three other players have done that at such a young age _ Mickey Mantle, Miguel Cabrera and Andruw Jones.
Harper was prouder of his catches on this day, though. He said playing in Nationals Park all season helped him learn how to deal with a tough sun field.
“We have that in D.C. in center, so I really had to deal with it all year long,” he said.
Crawford saw it a little differently. Sun or no, he believes very few left fielders besides Harper make either play.
“I played with him in the Fall League in 2011, so I got to see him quite a bit,” Crawford said. “He’s just a real good athlete, and he had a good game out there today.”
“It’s easy to forget he’s just 21,” Ishikawa added. “It feels like he’s been in the league for a lot of years, and he plays like it, too. He definitely plays above his age and does a lot of great things.