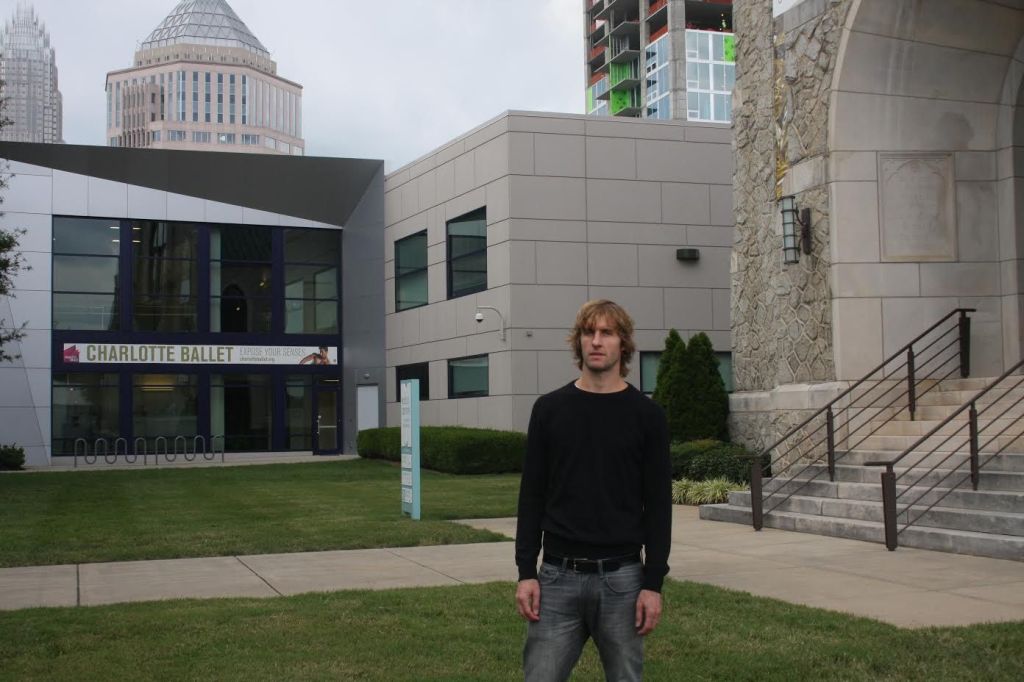 CHARLOTTE — Frank Selby has perfected the serious artist persona. Longish hair. Black sweater. Skinny jeans. Non-descript sneakers.
His art is serious as well. Selby has long explored the conflicts that occur when communication in society breaks down. His artwork is full of images of protests, war and violence.
So Selby is a pretty serious guy. Until you ask him about his daughter. Then, he gets this goofy smile on his face as he whips out his iPhone and starts swiping through photographs of adorable 3-year-old Vivian. Vivian on a horse. Vivian with a mustache.
So he’s a doting father, too.
But for the next couple of months, Selby will be putting on his serious artist face, as he’s among a handful of artists participating in a residency program this fall at the McColl Center in Charlotte. While there, Selby will continue to create art, but he’s also collaborating with Sasha Janes, the ballet’s associate artistic director, to create a conceptual dance performance.
The new ballet will be performed as part of Charlotte Ballet’s Innovative Works series from Jan. 30 to Feb. 15.
At present, however, Selby is busy getting settled in his new studio. At 25 feet by 25 feet, it’s about the same size of his studio at home in Salisbury. Frank, 39, and his wife, Jenn Selby, 36, the program chair of the Department of Fine & Applied Arts at Rowan-Cabarrus Community College, live in Neel Estates.
There are only a couple of pieces of painting on the wall thus far — a new medium Selby is exploring. A bottle of water has been set on a desk nearby, along with a single pear, a couple of art books, and a small bottle of ibuprofen.
The residency, he explains offers “solitude, space, time away from the cares in life. You can focus on your work.”
It’s gotten him out of his comfort zone and immersed him with his peers, his wife says. “I’m very supportive of this residency.”
Selby is a full-time studio artist already, but was approached by Brad Thomas of the McColl Center, as they have a friend in common.
He soon found Janes eager to collaborate.
“I thought it would be worthwhile for me to explore other forms of communication,” Selby says.
So how does an artist collaborate with a dancer?
“A lot of people have a hard time with this,” Selby admits. “I think people are scratching their heads.”
It won’t be, Selby says, his art projected on a wall while dancers move around it.
Instead, he’s designing a narrative for dance.
“I’ll design what it looks like visually,” he says, “and Sasha takes my idea and takes his expertise with ballet and maps it out.”
Selby’s idea for the dance, he explains, centers around the CIA’s experiments with drugs and mind control in the late ’50s and early ’60s. He is interested in exploring the experience of the individual versus the social mind, the culture of consciousness. He’s also looking at capitalism versus communism, and the development of the Cold War.
“It’s very much a narrative of the Cold War, of communist paranoia,” he says.
It sounds a bit dark, does it not?
“To me,” he says, “clarity is power. Clarity is good. If you see the ballet, it will be amusing. I don’t think it will come across as being dark.”
The truth may be out there, but it’s complicated, Selby says. “I don’t believe in easy answers. That’s why the work I make is done the way it is.”
Even though the artists are housed in Charlotte, Selby will be commuting some, as he does not want to spend too much time away from Jenn and Vivian.
“He has use of a condo,” Jenn says, “and that’s nice for him because he’s nocturnal. He can work all night if he needs to. We have pieced together a schedule.”
Frank will spend Mondays with Vivian, driving back to Charlotte after her bedtime. Then he’ll work Tuesday-Thursday at the McColl Center, with Jenn and Vivian joining him for weekends.
Frank’s word to describe his wife is “awesome.”
“She’s so funny,” he says of his daughter, goofy smile returning. “I do a lot of daddy duty. She’s so smart. I have to be careful with what I put out there to her. She’s a brilliant kid, and a great artist, too.”
Of course she is.
And she always talks as she works, her daddy says. “She’s always working through ideas. She definitely has my love for words.”
He has a love for his daughter, and a love for his art, too.
“It’s exciting to see where my ideas will be Sasha’s ideas,” he says. “We’re getting along very well. He’s practical and imaginative.”
Which is good. Because Frank Selby has no idea how to dance.
Still, he says, he’s game.
“This whole thing is a splendid opportunity for me to fail,” he says. “It feels good to go out into some new territory.”