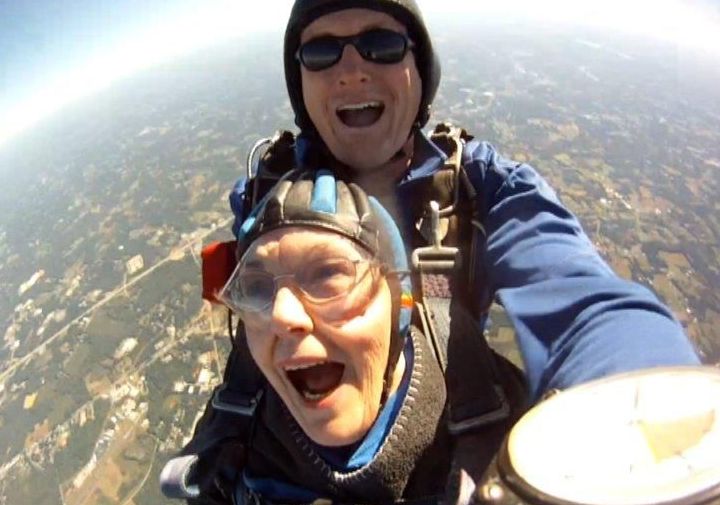 When Irene Moeller heard that some Oak Park Retirement residents might go sky diving, she was interested. Adventure is nothing new for the 81-year-old Brooklyn, N.Y., native. She has flown in a stunt plane, doing spirals and loops as part of an air show, and also spent time in a helicopter. Moeller has already experienced white water rafting, horseback riding and a zip line while a resident of Oak Park.

Moeller moved to New Bern 22 years ago, and then to Salisbury to join her son and daughter after the death of her husband in 2012. Her son, Alan Moeller, and daughter, Joanne Strobl, both live in the Salisbury area. Moeller said, “I was glad to move to Oak Park because they have great activities and they keep our minds going.”

On Saturday, Moeller became the star of the day at Piedmont Skydiving at the Rowan County Airport. While other residents had initially wanted to jump, Moeller was the only one who suited up and strapped in to skydive from a plane at 10,000 feet. She was going to jump in tandem with Piedmont Skydiving owner Jim Lanningham.

Ryan Monk, owner of Monk Law Firm, sponsored Moeller for the cost of her skydiving adventure.

“I do a lot of estate planning for the elder residents at Oak Park,” Monk said. “I want to serve those folks who have served our community for many years. This is an opportunity to celebrate life and pay it backward to them. But I can tell you that this is the closest I am ever going to come to jumping out of an airplane.”

Lanningham told them what to expect once the airplane door was opened and how they would roll backwards away from the plane and then face down for the belly-to-earth free fall.

“Head back, push your pelvis out, knees back and end up shaped like a banana,” Lanningham said. “You will grip the harness straps as you exit the plane. When you land, you want to slide in on your rear. Sitting down for the landing is better.”

With that, Moye and Lanningham got in the plane for a 20-minute ascent to 10,000 feet while Moeller waited on the ground for her turn. About a dozen Oak Park residents along with others from the Experimental Aircraft Association joined friends, family and other spectators for the excitement of Moeller’s jump. Moeller was often asked, “Are you nervous?” She responded by holding out her hand each time and saying, “Do I look nervous?” Clearly Moeller was calm, as exemplified by her steady hand.

After Moye landed to the cheers of the spectators, Lanningham hoisted a new parachute and walked Moeller to the plane. Lanningham sat against the back wall with Moeller leaning back against him as they both faced forward while the plane made another ascent. Lanningham filmed the scenery and Moeller during the climb. She remained very calm and smiling throughout, even as the final tightening of the straps and hook ups preceded her exit of the plane.

Moeller scooted forward and sat on the edge of the plane floor, with her feet on the wheel strut. Air temperature at that elevation was in the low 30s. Out she went for the 35-second free fall at an air speed of 120 mph. Then came the more than five minute parachute ride back to earth. She landed easily, and Lanningham asked her if she wanted a golf cart ride back to her friends. Moeller quickly answered, “I can walk.” And walk she did to the resounding cheers of her friends from Oak Park.

Lanningham said all ages can try skydiving, from 18 on up.

“We have had a gentleman do this at 89, but Irene did great. I could tell she had a good time and was quite adventurous. It was a pleasure to take her up,” he said.

Piedmont Skydiving opened in April, 2011 and is now in its fourth season. The business is open March-December. Lanningham has been jumping for 18 years but spends his regular workweek as a helicopter pilot for the North Carolina Highway Patrol.

Oak Park Activities Director Karen Leonard said, “At Oak Park, we tell the residents that the sky is the limit when it comes to their possibilities. I guess the sky really was the limit this time. We ask our residents what they want to do and then we get busy making it happen. Adding adventure to their lives has been great fun for everyone, especially all those who were there to cheer Irene on from start to finish.”

When all was said and done, Moeller was asked about going up soon in a hot air balloon. She responded, “I’ll be first in line for that too!”