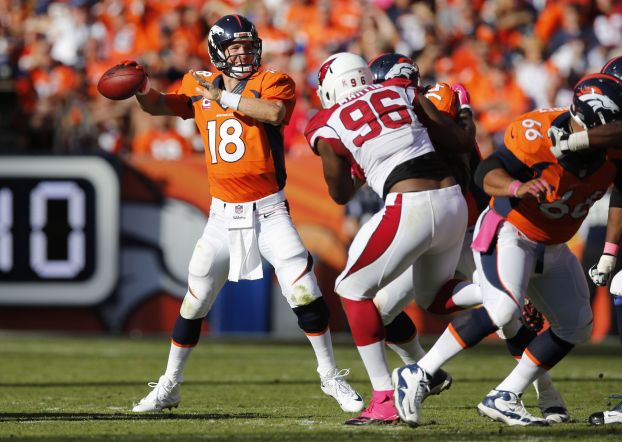 DENVER (AP) — Peyton Manning threw his 500th career touchdown pass, joining Brett Favre as the only members of the exclusive club.
Manning threw a 7-yard dart to tight end Julius Thomas to give Denver a 7-3 lead over Arizona in the first quarter Sunday. Thomas caught six of Manning’s first nine TD throws this season.
Manning reached the mark in his 244th career regular season game, 49 fewer games than it took Favre.
It was Manning’s 101st TD pass since coming to Denver in 2012 following his tearful goodbye in Indianapolis, where he played his first 13 NFL seasons before sitting out all of 2011 following neck fusion surgery.
Manning, who added two TD passes to Demaryius Thomas as the Broncos took a 21-13 halftime lead, figures to surpass Favre’s record of 508 TD throws later this month.
On the final play of the first half, Broncos slot receiver Wes Welker broke Rod Smith’s mark for most catches by an undrafted player. His 850th career grab, his third of the game, covered 5 yards.
As he approached the milestone, Manning acknowledged that, yes, he looks at his TD throws and interceptions ever year. If the former is high and the latter low, “that means you’re getting your team in the end zone and … you’re protecting the ball,” which in turn, “usually leads to winning.”
His touchstone touchdown came against two of his mentors: Arizona coach Bruce Arians and Cardinals assistant head coach Tom Moore. Arians was Manning’s first position coach in 1998 and Moore was his offensive coordinator during his entire time in Indy.
Manning’s first TD toss in a Broncos uniform was the 400th of his career and it came on a 71-yard screen pass to Demaryius Thomas.
—

LOS ANGELES (AP) — Matt Kemp yanked the Dodgers from the depths of despair with one swing. Kemp hit a... read more