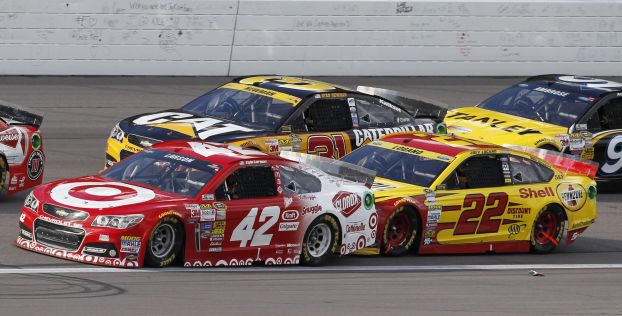 (MCT)
Oct. 05–Historically, Joey Logano hasn’t enjoyed much success at Kansas Speedway, but his affection for the track reached new heights after taking the checkered flag in Sunday’s Hollywood Casino 400.
He also gained a significant advantage in the Chase for the NASCAR Sprint Cup.
Logano won back-to-back Nationwide Series races at Kansas Speedway in 2009 and 2010, but he finished 15th or worse in his first eight Sprint Cup starts at the track.
The tide began to turn in 2013, when Logano hooked up with Team Penske and crew chief Todd Gordon. He finished fourth in the October 2013 and May 2014 races and, entering the weekend races in Kansas, actually had no clue about his past struggles at the track.
“We were watching TV after practice and they were showing the stats on TV,” Logano said. “They said my average finish was like 21st. I said, ‘Man, the last two times here we finished fourth. It must have been really bad before.’ … It’s funny because I guess I wasn’t very good here before, but now it’s my favorite track.”
With his victory in the first race of the Chase’s second round under NASCAR’s new knockout format — the Contender round — Logano is guaranteed a spot in the eight-driver Eliminator round, which begins Oct. 26 at Martinsville Speedway.
“That makes Talladega a whole lot easier,” Logano told Gordon by radio after crossing the start/finish line. “Mission accomplished.”
Driver points were reset after last week’s race at Dover and will be reset again after upcoming races at Charlotte Motor Speedway and Talladega Superspeedway, a track known for spectacular and potentially season-crippling crashes.
“Today was a big-time stress relief, I’ll tell you,” Gordon said. “When you look at this segment of the Chase with Talladega as the last one, it’s a big wild card. I felt like this was a place we could capitalize.”
Logano, who started fourth, was a constant presence in the top 10 throughout the 267 laps and led a race-best 122 laps.
The victory was his eighth career Sprint Cup win and his fifth this season, which tied him for the series lead with Team Penske teammate Brad Keselowski.
Five of the top-seven finishers were Chase participants with Kyle Busch, who won Saturday’s Nationwide series Kansas Lottery 300, claiming third.
Busch exorcised some serious demons at Kansas Speedway with his strong showing.
He hadn’t finished better than 10th in a Sprint Cup race on the track since 2006, and he had failed to finish three of the last four races here.
“I won today,” Busch said. “I just didn’t get champagne and a trophy, but to get through Kansas feels nice.”
Columbia native Carl Edwards, Ryan Newman and Denny Hamlin snagged fifth through seventh.
Sprint Cup rookie Kyle Larson finished second, matching his career-best finish, while Martin Truex Jr. ran strong and finished a season-best fourth. Neither Larson nor Truex are in the Chase.
The race took a heavy toll on the Chase hopes of several drivers, including six-time Sprint Cup champion Jimmie Johnson.
Greg Biffle bumped Johnson from behind in turn two, causing both cars to spin and collecting rookie Justin Allgaier in the 85th-lap carnage.
Brad Keselowski, the 2012 Sprint Cup champion, blew a right front tire and smacked the wall coming around turn two on lap 160. He was running fifth at the time, but finished 36th.
Blown tires played a significant factor in the race and all teams were aware of the danger.
“We know lower air pressure is always faster, but it’s more abusive on the tire, definitely causes a lot more heat, stresses the tire more and sometimes you take some chances and it bites you,” Busch said. “We were smart about all that, and we had a good enough car that would remain good speed throughout a run.”
With the struggles, Keselowski is 22 points behind Jeff Gordon for the final spot in the eight-driver Eliminator round. He’s joined on the outside looking in by three Hendrick Motorsports drivers — Johnson, Dale Earnhardt Jr. and Kasey Kahne, who scraped the wall on lap 235 and finished 22nd.
To reach Tod Palmer, call 816-234-4389 or send email to tpalmer@kcstar.com. Follow him on Twitter at @todpalmer.
___

LOS ANGELES (AP) — Matt Kemp yanked the Dodgers from the depths of despair with one swing. Kemp hit a... read more