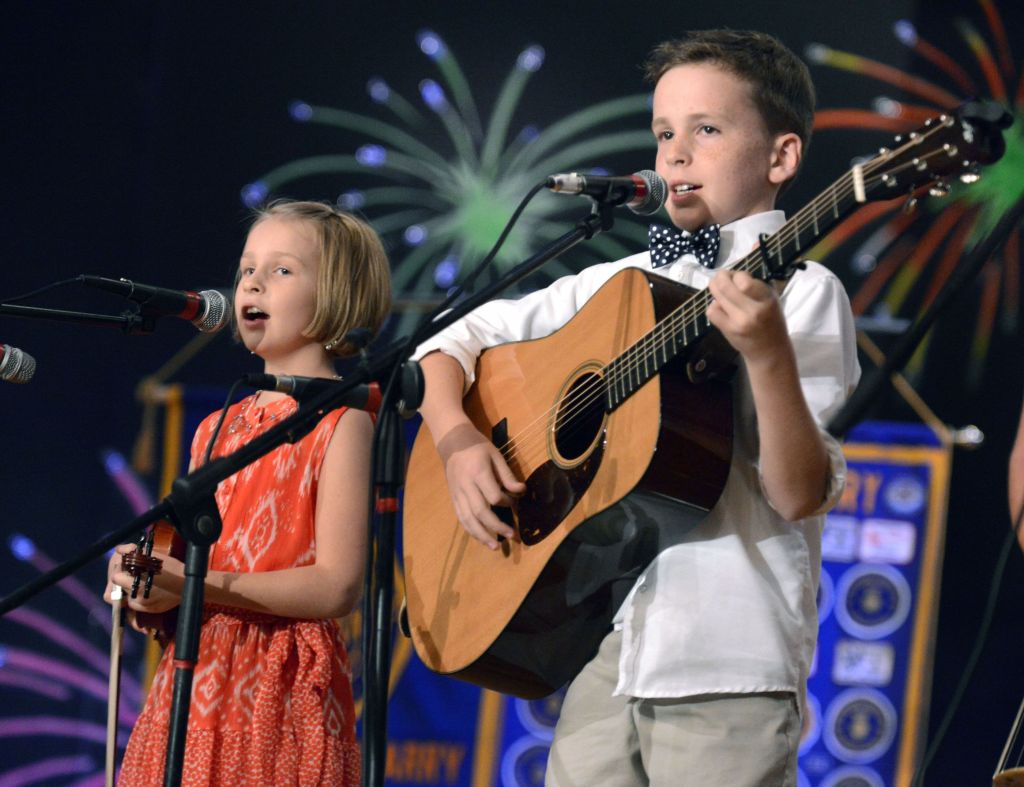 GRANITE QUARRY — The 48th Annual Civitan Fiddler’s Convention was a night for young and old. A night when the young “Most Promising Talent” could make their music sound on stage and the old carried on the long tradition of bluegrass music with a story to be told in every piece of music.

Gabriel and Grace Bemus from Salisbury opened the show for the 11- and-under age group. Brother and sister, with guitar and fiddle, took to the stage with Gabriel in shorts, a white shirt and bow tie and Grace in an orange dress and cowgirl boots. Forty-five minutes later they were named the champions of that age group.

Courtney Perry from Stanfield, last year’s champion at 11 years old, belted out a Lorette Lynn song that was dedicated to “all the women who have had to fight for their man.” The crowd loved her song. She picked up the prize for first runner-up in the category.

Four-year-old Gabriel Webster from Faith played the fiddle and sang his way into the second runner-up spot. All the microphones had to be lowered — I mean, really lowered — for him to reach.

D.J. Poplin played the banjo accompanied by legend Ronnie Hatley on guitar in the 12-16-year-old group. Wearing her red tennis shoes, she ended her song with a thumbs up and a big smile to the crowd. The Five Mile Creek Band gave us their version of “Foggy Mountain Special” with a big response from the fans.

Daniel Thrailkill from Mt. Ulla sang a song that he wrote called “Fallin’ Over You.”

The song is his first as a bluegrass number. In the hallway he chuckled that he wrote the song during the summer while he was painting the shutters at Back Creek Presbyterian Church. He explained, “I had a paint brush in my left hand and a pen in my right hand.” He added that he had to do something while he painted since he was bored.

A long time musician in bluegrass, 76-year-old Wayne Anderson Williams Sr. from Mocksville now plays the dobro. Years ago he played the guitar, but arthritis in his fingers forced him to switch to the dobro. “A friend of mine had it (dobro) and was going to give it away so I asked him for it,” Williams said. “It’s not really that hard to play. I think the guitar is the hardest to play.” He likes to play with the Gaining Ground Band in Mocksville.

The lyrics from the song “Wagon Wheel” got the crowd going when the Cabin Creek Bluegrass Band from Peachland “picked and grinned’ the lyrics.

Rock me momma anyway you feel

The Movin’ On Bluegrass Band from Concord continued pumping excitement into the crowd by playing and singing “Truck Driving Man.” Some of the lyrics are:

So pour me another cup of coffee

For it is the best in the land

And drop another quarter in the jukebox

Play a song about a truck drivin’ man.

Don Livengood, who has been a Civitan for 55 years, headed up this year’s convention once again. He said they had 50-60 individuals and bands in the competition this year. The youth competitors came from several counties surrounding Rowan.

There are a number of teachers offering classes in playing bluegrass music being conducted around the area now and many of the teachers came with their students to compete.

One of these teachers from Faith, Carrie Ezelle Webster, was honored for her service to bluegrass music. She has participated in the competition herself and won in the past and now she is teaching young students to carry on the tradition.

The Granite Quarry Civitans use the funds raised from the event in the community for the Special Olympics, Boys and Girls Homes, special needs for children and adults, the Victory Junction Camp Gang, scholarships, local schools and the Civitan International Research Center. Some $1,700 in cash prizes and trophies were awarded to the musicians.