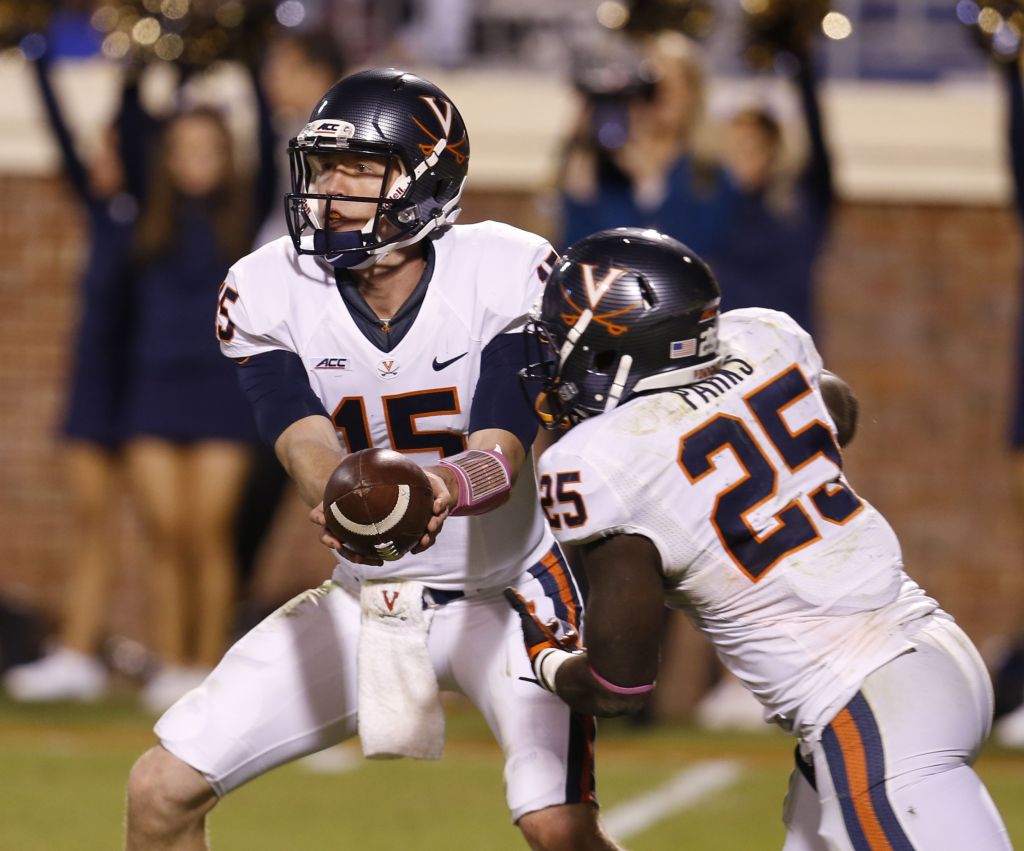 Area athletes update …
Virginia senior Kevin Parks (West Rowan) enjoyed a career day on Saturday as the Cavaliers beat ACC opponent Pitt 24-19 in Charlottesville.
Parks carried 29 times for 169 yards, setting career highs in both categories. Parks’ day included a 48-yard touchdown run.
It was the 10th 100-yard game for Parks and the first time a Virginia rusher at topped 150 yards in six years.
Parks is tied for fifth all-time at Virginia with 20 rushing TDs and also extended his streak of making at least one reception in 17 straight games.
“You could tell early on that Kevin was doing a lot of his yardage after he was initially stopped,” Virginia coach Mike London said in his postgame interview. “He was running through arm tackles, and he pushed the pile. We all know what he can do because he is the ACC’s returning leading rusher, but this game was one of those games that he was making himself known. He was a dominant force out there today and I’m happy for him to have a career day.”
Added Parks: “We established the run. That was the gameplan.”
• South Carolina State’s 13-0 win against North Carolina A&T was a defensive struggle keyed by burly lineman Javon Hargrave (North Rowan). Hargrave made six tackles. He had three tackles for loss and two sacks. One of those sacks was for a loss of 15. He’s a candidate for the MEAC Defensive Player of the Week.
• Georgia Tech’s Domonique Noble (West Rowan) made a tackle on a kickoff in Saturday’s 28-17 win against Miami.
• IN UNC’s 34-17 loss to Virginia Tech, Romar Morris (Salisbury) had a 15-yard reception for the Tar Heels and carried twice for 4 yards.
Damien Washington (A.L. Brown) made two tackles for the Heels and caught a 7-yard pass.
• Kalif Phillips (A.L. Brown) rushed 23 times for 94 yards for Charlotte in a 27-24 loss to Gardner-Webb. Phillips had one reception for 6 yards.
Phillips has rushed for 585 yards on 105 carries this season and has 10 rushing TDs.
D-II
Senior DB Mark McDaniel (South Rowan) was a force for Catawba in a 51-21 win against Tusculum and could be a SAC Defensive Player of the Week nominee. McDaniel had an interception at the goal line, forced two fumbles with big hits and had a tackle for loss.
Jamal Lackey (Davie) had a sack and a fumble recovery for the Indians.
• Tusculum’s Emmanuel Gbunblee (West Rowan) made two tackles in his return home. Gbunblee played in junior college at Eastern Arizona last season.
• Logan Stoodley (West Rowan) had a tackle and a QB hurry for Limestone in Saturday’s 38-9 loss to North Greenville.
• Long snapper T.J. Bell (Carson) made a tackle in punt coverage for Wingate in a 33-10 loss to Newberry. Catawba visits Wingate on Saturday.
• Isaiah Laster (West Rowan) completed a pass for Livingstone in Saturday’s lossto Elizabeth City State.
• In a 24-9 loss to undefeated Shepherd, John Knox (Salisbury) completed 11 of 23 passes for 107 yards.
• Quentin Sifford (West Rowan) made two tackles and had a QB hurry for West Liberty in a 39-13 loss to Duquesne.
• Freshman Calvin Edwards (East Rowan) had five carries for 34 yards, including a 20-yard burst, to help Lenoir-Rhyne roll 48-17 against Brevard. L-R is 5-0.
Brevard punter Garrett Nestor (Davie) averaged 39 yards on five kicks.
D-III
Adam Smith (Davie) had four receptions for 36 yards, including a TD, as Guilford rolled 52-28 against Washington & Lee. It was the eighth TD catch of the season for Smith.
• Hobie Proctor (West Rowan) kicked three field goals and three PATs to account for a dozen of Averett’s points in a 34-30 loss to N.C. Wesleyan.
Dontae Gilbert (Carson) also had a big game for Averett with an interception, a pass breakup and six tackles.