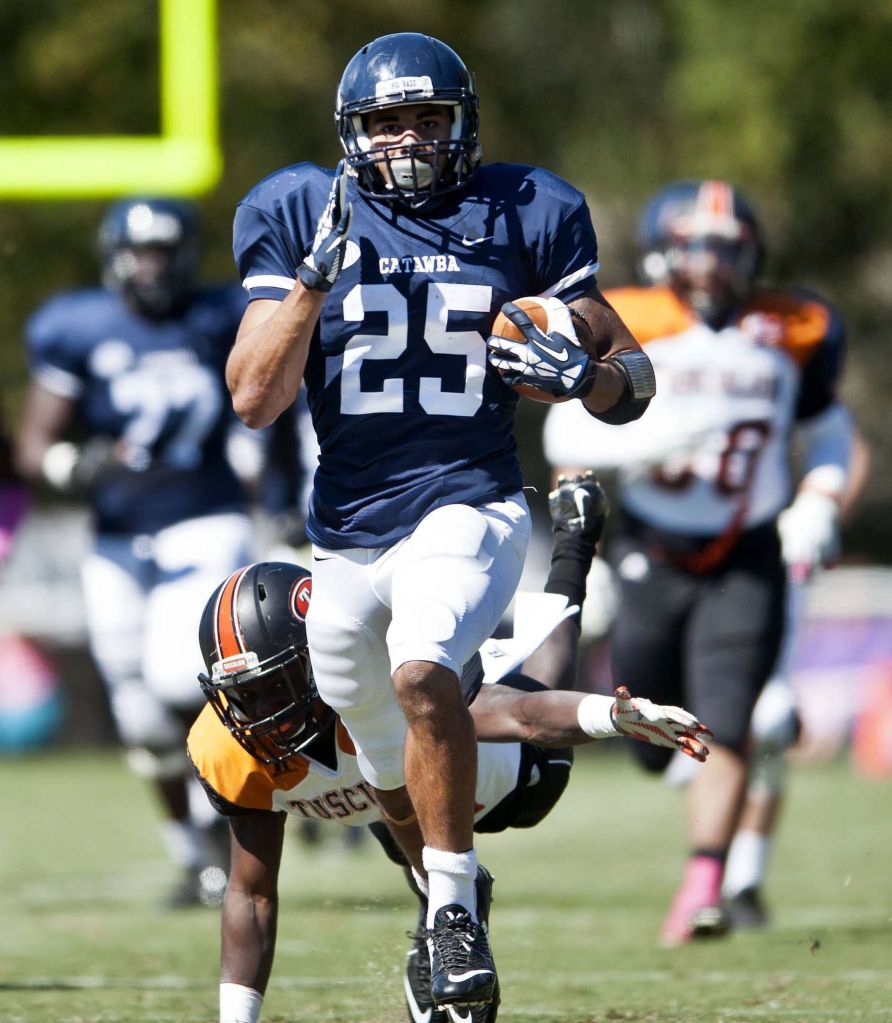 The opening series didn’t start like how Catawba wanted, but it worked out. Tusculum came out in a hurry-up, no-huddle look that took the Indians by surprise. On third-and-10 from the Catawba 11, Tusculum quarterback Malcolm Pendergrass’ pass was picked off by Catawba safety Mark McDaniel.
“It felt like they was moving the ball really good, and they got down to the goal line, and I don’t think they could figure out what they had planned,” McDaniel said. “We just had a great defensive stand right there. That’s when the defense needed it the most and the team needed it the most.”
The Indians started slow on offense as well. They quickly got it going on both sides of the ball for a 51-21 victory at Shuford Stadium.
It was a bounce back win for the Indians. Last week, Catawba lost by just two points to Carson-Newman at home. The Indians went into this game looking to get rolling with each passing week through conference play.
“For the most part, we’re going to use this win as momentum to get us going within our league with another tough team in Wingate coming next week,” head coach Curtis Walker said.
Catawba (3-2, 2-1 SAC) got on the board in the final five minutes of the game when, on second-and-15 from the Tusculum 30, quarterback Mike Sheehan found Mark Burgess along the right sideline for a 30-yard touchdown play. Burgess slipped by a cornerback and found himself open on the sideline just short of the goal line. He forced his way into the end zone for the 7-0 lead with 5 minutes, 15 seconds left in the first quarter.
“As soon as I saw (the cornerback) just sitting there, I was like, ‘Please throw me the ball. Please throw me the ball,’” Burgess said. “(Sheehan) made the right read and everything and — six.”
It was the first of three touchdowns — two rushing, one receiving — on the day for Burgess. He ran for 79 yards on 15 carries and caught two passes for 36 yards.
That touchdown catch sparked a solid run by the Catawba offense in the second quarter. A 7-yard touchdown run by Burgess, a 61-yard run by Cary Littlejohn, and a 17-yard score by Eamon Smart made it a 28-0 ball game with 7:48 left in the second quarter. Littlejohn led the Indians in rushing with 104 yards on 15 carries.
Tusculum (1-4, 0-2 SAC) threatened to make it a close ball game. After Burgess’ touchdown, Ken Funnye returned the kickoff to the Catawba 12. That set up a 1-yard plunge into the end zone by Fernando Smith.
Funnye had four kickoff returns for 126 yards. He also caught five passes for a game-high 121 yards and a touchdown. Catawba’s special teams had another play go awry on the ensuing kickoff. The ball was held up by a strong wind blowing into the stadium. It landed with a good amount of backspin in the neighborhood of the Tusculum 30. It took a bounce between Catawba blockers and back toward the Pioneers. Tusculum’s Irim Aiken dove on it, and the Pioneers had the ball at the Catawba 35. Six plays later, Smith pounded his way into the end zone again. His second 1-yard touchdown run of the day cut the Indians’ lead to 28-14 with 4:53 left in the half.
Catawba answered on the next drive. Sheehan’s 14-yard scramble on second down moved the ball to the Tusculum 33. Sheehan capped the drive with his 5-yard run to the end zone on a zone-read quarterback keeper. That run with 28 seconds on the clock gave the Indians a 35-14 lead at halftime.
Sheehan made plays with his legs all day. Three times he ran for first downs on designed quarterback draws. He finished with 102 yards rushing on 11 carries.
“Monday watching film against North Greenville, their quarterback made a lot of plays with his feet,” Sheehan said. “He had some pretty big runs against them, so it was in the gameplan, and I said to myself I had to make some plays with my feet for us to be successful with the way their secondary was playing.”
Sheehan also passed for 180 yards and a touchdown on 19-of-29 passing. He was picked off once.
Burgess’ third touchdown of the day essentially sealed the win. On the opening drive of the second half, the Indians put the ball in his hands four times. He got a 6-yard scoring run for a 42-14 lead with 11:45 left in the third.
Follow Adam Houston on Twitter at @AdamRHouston.

Catawba has a chance to get on a roll