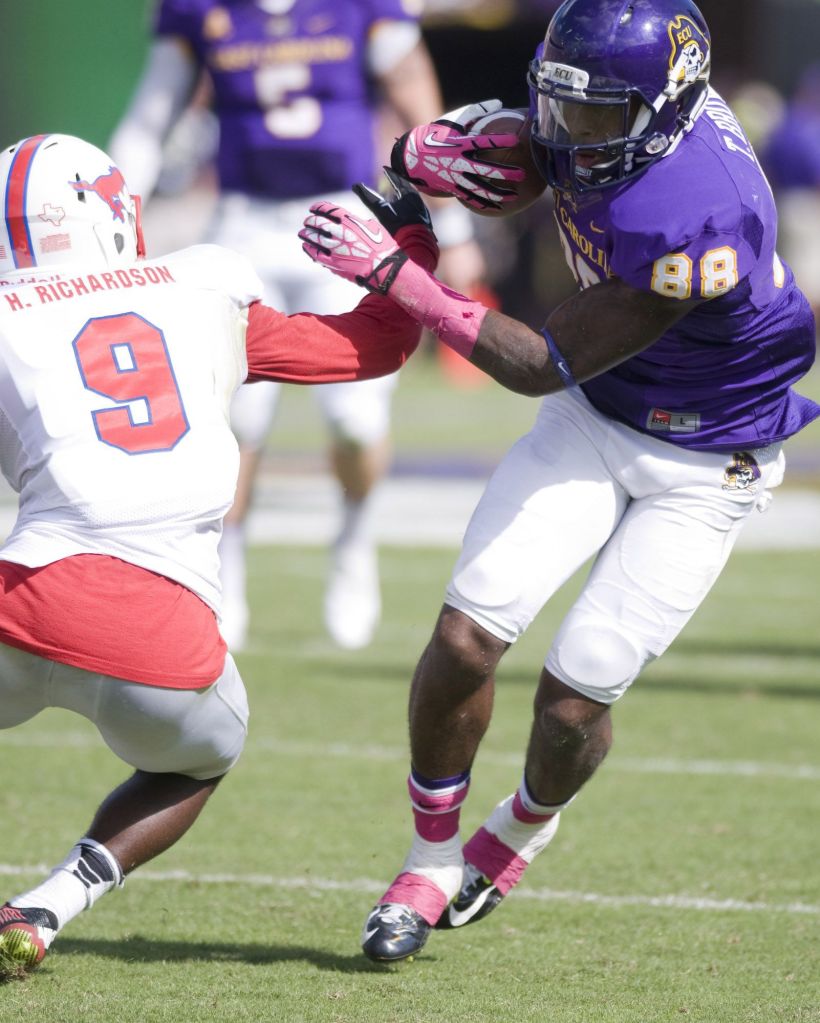 GREENVILLE, N.C. (AP) — Shane Carden and Justin Hardy have been the focus of East Carolina’s high-powered offense the past few seasons. Fittingly, they led the No. 22 Pirates into a new league Saturday with another big performance.
Playing in the program’s first American Athletic Conference game, Carden threw for 410 yards and four touchdowns while becoming the school’s all-time passing leader in a 45-24 win against SMU. Hardy, meanwhile, had the first 3-TD receiving game of his career and continued his pursuit of the all-time receptions record in bowl subdivision history.
Carden, a fifth-year senior from Texas who was part of coach Ruffin McNeill’s first recruiting class in 2010, set the career passing yardage record midway through the third quarter for the Pirates (4-1, 1-0), who finished with 581 yards.
“They announced it I think way too early,” Carden said. “They were announcing it and everybody was like, ‘Man, congrats.’ I was like, ‘Just stop, let’s go score right here. Let’s finish this game.”’
East Carolina was playing with a national ranking for the first time in six years. And while the Pirates didn’t turn in a dominating performance, they still remained in control against the Mustangs (0-5, 0-1).
They ran out to a 21-0 lead before the offense looked as though it took its foot off the gas, while the defense never looked sharp against an SMU offense that had managed one touchdown all year. The Mustangs (0-5, 0-1) finished with a season-high 390 yards and nearly made it a one-possession game early in the fourth before the Pirates put the game away.
The Pirates have long thrived in the underdog role. But after beating Atlantic Coast Conference programs Virginia Tech and North Carolina in the last two games, they’re back in the Top 25 for the first time since 2008 and learning how to play with that favored status.
“We’re learning that pretty quickly,” Carden said. “We understand we’re going to get teams’ best, and teams are going to be ready to come out and they want to beat us. But it really doesn’t change how we prepare.”
East Carolina was a 41-point favorite in this one against a team that had managed just 12 points all season.
“I’m not into points and all that,” McNeill said. “I just hope we win by one and get out of there. So I was happy with the win and we’ll grow a lot from this.”
The Pirates had scored 70 points and had a program-record 789 total yards in the win against the Tar Heels two weeks ago. The offense did its part again, with Carden completing 31 of 41 passes and breaking David Garrard’s record of 9,029 yards with a 30-yard strike to Isaiah Jones in the third.
When McNeill was asked afterward about Carden’s record, his quarterback interrupted the news conference by shouting out “It’s was all coaching, good coaching.”
McNeill responded by giving Carden a huge hug.
Hardy finished with eight catches for 120 yards, all in the first half, and needs 47 catches to pass Oklahoma’s Ryan Broyles for the FBS career receptions mark. Jones added nine catches for 130 yards and a score.
For SMU, the game at least offered a welcome show of progress for the offense. The Mustangs hadn’t reached 300 yards in a game, but moved the ball effectively with a short passing game.
Garrett Krstich threw for 339 yards and had two touchdown passes to Darius Joseph, who had 13 catches for 100 yards for SMU.
Prescott Line also ran for a short touchdown late in the first half. Before that play, SMU’s only TD in 2014 was a 33-yard final-play pass in a 43-6 loss to North Texas on Sept. 6.
“From where we were at to where we are now is night and day,” SMU interim coach Tom Mason said. “Going back to that North Texas game and I walked off that field, I didn’t feel too good about life. Now we have a chance.”
———
Follow Aaron Beard on Twitter at http://www.twitter.com/aaronbeardap