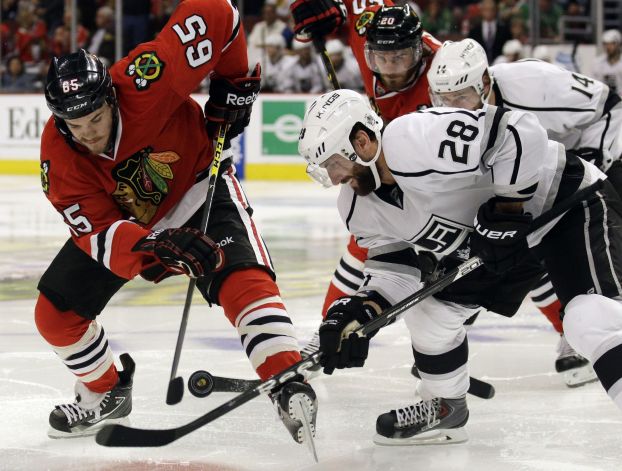 League’s power lies in the West

Hockey is a booming business right now. After an attention-grabbing Olympic trip and an exciting postseason for the scandal-free NHL, revenue and television ratings have risen to record levels across a largely healthy, happy league.
Yet the NHL ice is tilted decidedly to the West, and the continental divide might even grow this season.
A few months after Chicago and Los Angeles staged an epic conference finals won by the Stanley Cup champion Kings, nearly every team on the Western side of hockey’s unbalanced standings made significant offseason additions to chase the league’s twin postseason powers.
Anaheim added Ryan Kesler. Dallas snared Jason Spezza and Ales Hemsky. St. Louis signed Paul Stastny. Minnesota snagged Thomas Vanek. Colorado got Jarome Iginla and Daniel Briere.
Even Chicago picked up Brad Richards. Only the champs essentially stood pat, daring the West to catch them.
“It seems like the West is loading up again,” Kings center Anze Kopitar said. “But at the end of the day, I don’t think it’s going to matter too much what the other teams do. It’s going to matter what we do.”
The Blackhawks and the Kings each have two titles in the last five years, and they’re both the widely considered favorites to play for the Stanley Cup again. But when Los Angeles beat the New York Rangers in five games in the Stanley Cup finals last year, many prognosticators scoffed that five West teams could have beaten any East representative — and the theoretical math appears much the same this fall.
“The West is such a grind,” Ducks defenseman Ben Lovejoy said. “There’s so much talent. All these huge, physical teams that skate very well. We can have another great regular season, and it won’t matter if we don’t have the toughness to win in the playoffs.”
The Western Conference has won six of the last eight Cups, and the two East winners were stretched to a full seven games in the finals. Although Boston, Pittsburgh, Montreal and Tampa Bay return strong clubs, league MVP Sidney Crosby and the rest of the East’s stars realize they’ll have to go West to win a title.
“The West is where it’s at right now, and it runs in spurts,” Buffalo general manager Tim Murray said. “The Western teams are good teams. They’re big. They’re strong. Someone is going to have to dethrone L.A. to say the West is not the best.”
With labor peace and no momentum-killing Olympic break, the NHL is back on a normal schedule this winter. Many players believe the quality of games will rise with fewer back-to-back sets and less disruption.
Six teams have new head coaches, with Peter Laviolette taking over in Nashville for Barry Trotz — who moved to Washington — and Willie Desjardins helming Vancouver’s rebuilding project. The highest-profile job belongs to Pittsburgh’s Mike Johnston, a 57-year-old NHL coaching rookie who must gain the trust of Crosby and Evgeni Malkin to spur the underachieving Penguins back into Cup contention.
The NHL reduced its slate of outdoor games from six to two this season, hitting only Washington, D.C., and California’s Bay Area, while adding an old-fashioned indoor All-Star weekend for Columbus in January. The league and the players’ union also are inching toward reviving the World Cup of Hockey.
The league made some minor rule tweaks, notably banning the spin-o-rama move on penalty shots and shootouts — a huge disappointment for the few players capable of doing it effectively. The NHL also instituted slightly bigger fines for players caught diving — and for their coaches, who will be charged for repeat offenders.
The new catchphrase is “dry scrape.” That’s the brief ice-grooming maneuver instituted before overtime to encourage more extra-time goals. Teams will also switch ends of the ice before OT, and coaches are no longer required to name their first three faceoff shooters in advance.
In another indication of the NHL’s health, the league got indirect publicity shortly before training camps with scattered media reports of the league’s plans for another round of expansion. Hockey fans in Seattle, Quebec City, Las Vegas and the Toronto suburbs got understandably excited, even while Commissioner Gary Bettman called the stories bogus.
Most teams are bursting with the usual preseason optimism before the opening faceoffs, but even a miserable winter in 2014-15 comes with a hopeful spring. The worst clubs will get a chance to draft Connor McDavid or Jack Eichel, two prospects widely thought to be franchise-changing talents.
“We’re coming off the best season in our history,” Bettman said recently. “And we think this season is going to be even better.”