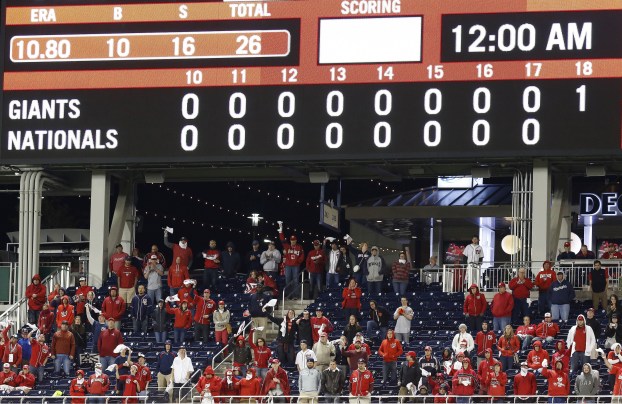 WASHINGTON (AP) — Brandon Belt, Yusmeiro Petit and the rest of the San Francisco Giants did what they do so well in October: They never give in, never give up, and win. Simple as that. No matter what it takes — or how long.
Even 18 innings.
On and on and on the Giants and Nationals played Saturday, from afternoon until just past midnight, when Belt’s homer off Tanner Roark leading off the 18th lifted San Francisco to its 10th consecutive postseason victory, edging Washington 2-1 for a 2-0 lead in their NL Division Series.
“That’s how we do it. On paper, it might not be the flashiest thing, compared to a lot of teams. But I like this group against anybody in baseball,” said Tim Hudson, who started for the Giants and went 7 1-3 innings, leaving hours before the game ended. “Who’d have thought we’d have came here and won the first two? Everybody in America probably didn’t think we had a shot. But everybody in this locker room knew that we did.”
The teams tied the mark for most innings in a postseason game and set a time record at 6 hours, 23 minutes. They combined to use 17 pitchers and 24 position players.
“After a while,” Giants rookie Joe Panik said, “every inning just kind of ran into the next.”
Said Craig Stammen, one of eight relievers used by the Nationals after starter Jordan Zimmerman was yanked while ahead 1-0 with two outs in the ninth after walking Panik: “The two worst things in baseball are boredom and frustration, and we were battling both of those tonight.”
Somehow, Washington was shut out for 15 innings after Anthony Rendon’s RBI single in the third.
The Giants can close out the best-of-five NLDS at home Monday in Game 3, with Madison Bumgarner — who tossed a shutout against Pittsburgh in the wild-card game — facing Doug Fister.
“I’m sure it’s going to be a quiet flight,” said Zimmermann, who threw a no-hitter in the regular-season finale, then allowed only three singles Saturday.
Could be quite a sudden end to 2014 for the Nationals, who won the NL East and led the league with 96 wins. But after a pair of one-run losses, they’re looking as if they’re the latest team that can’t figure out how to get past San Francisco.
Down to their final out Saturday, the Giants tied it in the ninth on Pablo Sandoval’s RBI double off Drew Storen — the closer who blew a two-out ninth-inning lead in Game 5 of the 2012 NLDS against St. Louis.
Petit entered in the 12th and threw six scoreless innings, allowing one hit and striking out seven, to earn the win.
“I was trying to get as much as I could out of him,” manager Bruce Bochy said.
Hunter Strickland got the save with a scoreless 18th.
By then, the temperature was in the low 50s; the Nationals used a hot-air blower in their dugout.
Roark came on in the 17th. An inning later, he threw a 94 mph fastball on a full count to Belt, who missed 96 games this season because of a broken thumb and concussion and was 0 for 6 Saturday until that at-bat. When he drove the ball into the second deck beyond right field, Belt dropped his bat and admired the shot as the Nationals Park crowd fell silent. When Belt got to the dugout, teammates slapped him on his head.
“I just wanted to get on base for the guys behind me — ‘Get ‘em on, get ‘em over and get ‘em in.’ Fortunately, I put a good enough swing on it,” Belt said.
Only one other postseason game in baseball history lasted 18 innings — when the Astros beat the Braves in a 2005 NLDS game that Hudson started for Atlanta. That one held the previous record for most time, at 5:50.
Bochy’s Giants, who won the 2010 and 2012 World Series, were built to win this sort of marathon.
“They are relentless. They don’t quit,” Bochy said. “We had our hands full tonight.”
In sum, San Francisco stays calm and collected. More than could be said for Washington, which had three of its best hitters — Denard Span, Adam LaRoche and Bryce Harper — go a combined 0 for 21, and had manager Matt Williams and second baseman Asdrubal Cabrera ejected in the 10th after arguing a called third strike.
Cabrera slammed his bat and helmet to the ground, then began yelling at home umpire Vic Carapazza, getting right in his face. That got Cabrera tossed. Williams pushed his player out of the way and also got kicked out. Fans began booing ball-and-strike calls; they cheered when a foul ball ricocheted off the screen behind the plate and hit Carapazza in the 18th.
Williams was asked afterward about the decision to lift Zimmermann, who retired 20 batters in a row until walking Panik — after the rookie launched a deep fly that barely sailed foul.
“Why did we decide to take him out? Because if he got in trouble in the ninth or got a baserunner, we were going to bring our closer in,” Williams said. “That is what we have done all year.”
Storen gave up a single to 2012 NL MVP Buster Posey, then the double to Sandoval that made it 1-all. Posey tried to score on the play, but shortstop Ian Desmond’s one-hop relay was in time for catcher Wilson Ramos to tag Posey. After a 2 1/2-minute delay when Bochy asked for a replay review, Posey was ruled out.