West Rowan airs it out 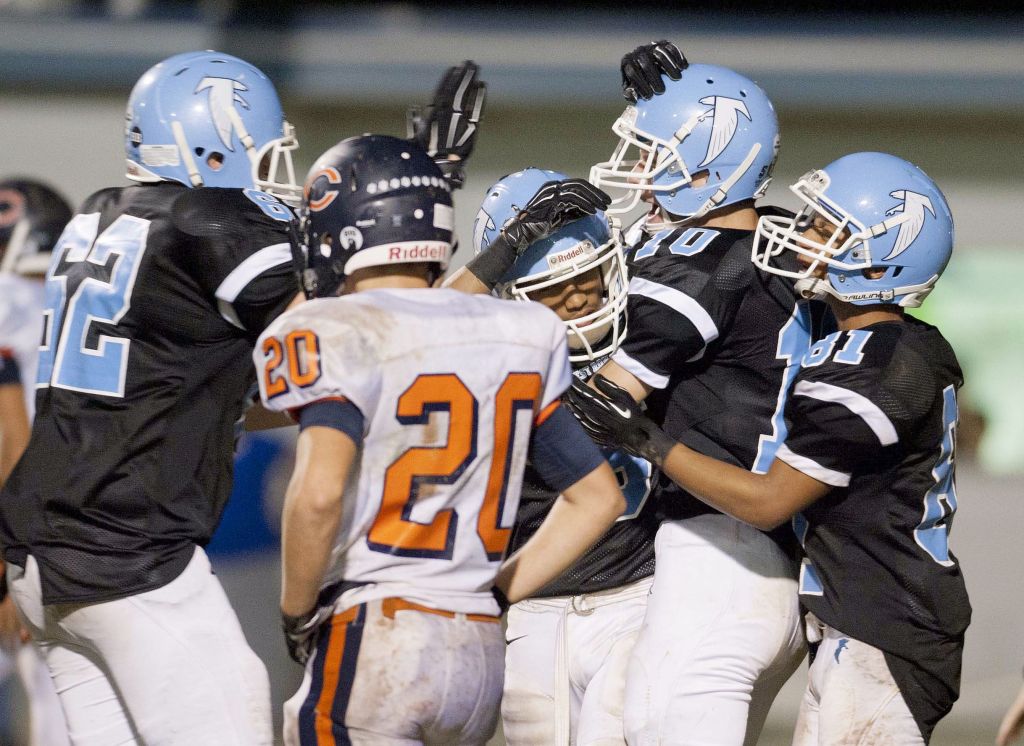 MOUNT ULLA — West Rowan quarterback Kacey Otto’s initials are K.O. and eventually he knocked out Carson. But even the guys on the losing side knew they’d been part of something special on Friday.
“This game will go down in history,” Carson defensive back Jonathan Rucker said. “Someone had to come out on the bottom and someone had to come out on top, but it was two teams playing their hearts out. For us, tonight is not gonna be about a loss. It’s going to be about playing big in a big ballgame. This game will help us get over the hump.”
Rucker, who had a clutch interception, offered those words shortly after he’d hugged devastated Carson coach Joe Pinyan and shortly after West Rowan had rallied for a mind-blowing 43-37 double-overtime victory that had fans screaming and dreaming like old times in Mount Ulla.
The margin of victory for the Falcons was a touchdown pass from Otto to Harrison Baucom in the second overtime. Baucom missed the PAT, leaving the Falcons with a six -point lead. But the West Rowan defense held, batting down a fourth-down pass from the 6-yard line after two penalties put the Cougars in a grim situation.
West Rowan trailed 23-6 in the first half, trailed 30-20 with under five minutes left and trailed one more time after Carson’s Darren Isom scored easily on the first play of overtime.
“We had three great opportunities to tuck our tails and quit, but we showed a lot of guts,” West Rowan coach Scott Young said. “This is one we should be able to build on.”
West Rowan (5-1, 3-0 SPC) found a go-to receiver in Kortez Weeks and found a passing quarterback in Otto. Carson forced those discoveries by stuffing Baucom and West Rowan’s ground game.
“I really don’t know how we could’ve played any better than we did, so I’m hurting for our kids,” Pinyan said. “We dominated the first half. We executed our gameplan. We made them throw it.”
It seemed like a great plan. Otto had completed just 19 passes in five games for a meager 226 yards.
But against Carson, Otto was an astonishing 21-for-31 for a single-game school record of 334 yards. He completed 16 passes after halftime. Otto threw three TD passes and ran for two more scores.
Kortez Weeks did most of the receiving damage with 11 catches for 181 yards.
“I told Coach that if we would throw it, we would win,” Weeks said.
Weeks backed up those words, but it was all Carson (2-4, 1-2) for a long time.
After Carson got a great punt from Heath Mitchem to the West Rowan 3, the Cougars picked up a safety when Baucom was tackled in the end zone. Brandon Sloop’s 13-yard TD run and Isom’s 7-yard scoring burst made it 16-0 in the second quarter and the Falcons looked overmatched on both sides of the ball.
“Isom and Sloop are good,” Young said. “People can say Carson is only 2-4 if they want to, but Sloop and Isom are good. You beat them and you’ve done something.”
Isom, Sloop and Dylan Livengood rolled up yards in the first half. Sloop and Isom had combined for 200 yards by halftime.
West Rowan got on the board in the second quarter on a run by Jovon Quarles, but when Isom powered into the end zone just seconds before halftime, the Cougars led 23-6.
The biggest play all night was Otto’s 55-yard TD pass to a streaking Weeks on the final play of the half.
“Coach Young told us at halftime that play was going to be the turning point,” Baucom said.
It was.
When Otto dragged tacklers into the end zone midway through the third quarter, Carson’s lead was down to 23-20. When Carson QB Andy Lear hit Brandon Huneycutt with a pass to the West Rowan 2 and scored on a sneak, the Cougars had a 30-20 lead with 5:55 left.
“That should’ve been enough,” Pinyan said.
Especially after West Rowan failed to move the ball on two straight possessions.
“Our defense got stops, but we squandered opportunities,” Young said.
With West in desperation mode, Otto, Weeks and Juwan Houston executed on a hook-and-ladder for a big gain.
Otto’s TD with 2:40 left cut Carson’s lead to 30-27, and West Rowan got a break when the Falcons kept possession after a fumble by Baucom. Based on the dismayed reaction of the Cougars, they were sure they had the ball.
Baucom, who had taken a pounding, cleared his head and kicked a clutch, 34-yard field goal on fourth-and-long with 12 seconds left to force overtime. He made the kick with room to spare.
“I didn’t hear the crowd, didn’t hear anything at all until after I’d made the kick,” Baucom said. “Then I heard the band when teammates started swarming me.”
There was still overtime to play, and it was 37-30 Carson after Isom scored and Cole Howard kicked the PAT. Otto hit Weeks for the answering TD, and Baucom’s PAT made it 37-37.
In the second OT, West Rowan had the ball first. A penalty moved the Falcons back, but Baucom made a good catch from the 13 for a 43-37 lead. He missed the PAT.
The Falcons’ defense, though, got one last stop.
“Of all our games this year, this is the one I wanted to win the most,” Baucom said. “I’d been hearing about losing to Carson last year for 364 days.”