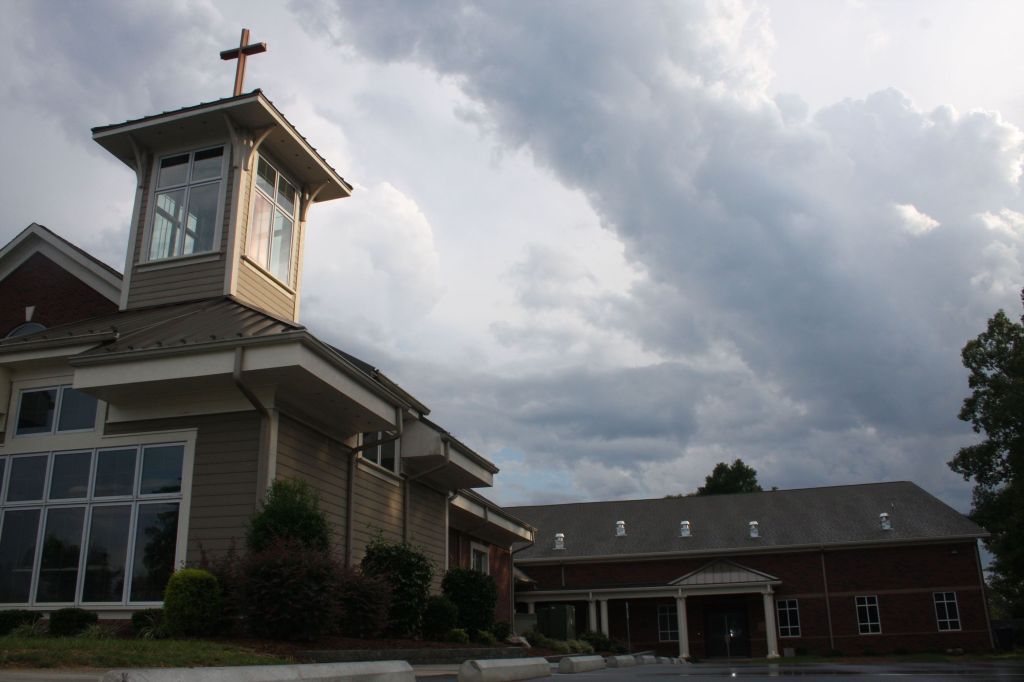 A 2002 sanctuary addition outfitted the main building with a new entrance and new restrooms. The new building houses offices, Sunday School rooms, an auditorium with expansive stage, and a homey yet well-appointed kitchen.

And that’s certainly what this congregation got.

The building is appointed in inviting shades of taupe, blue, green and brown. Suttles estimates that 90 percent of its furnishings came from Merino’s in Mooresville.

“We made one big trip over there,” he notes.

The structure was about five years in the making, Suttles says. “We had to wait for the economy to pick back up.”

The addition was built by C.M. Black of Concord, and Statesville Brick reinstated the original brick, now known as West Corinth Church Brick.

When Suttles came to West Corinth in 2003, the church was still $600,000 in debt from its previous addition. That was paid off, and then $1.3 million was contributed to the new project.

“To have a $1.9 million turnaround, I just find that staggering,” Suttles says. “People just gave from their hearts.”

Every month, the last Sunday’s offering goes toward the building fund.

Attendance averages 115 per week, Suttles says. “Our church is full of good people.”

Jeanna Gregory, a longtime member, says the congregation has a 20-year mortgage for the remainder of the new building’s debt, but hopes to pay that off in 15 years or less.

In the meantime, members are definitely enjoying the new space.

“We love our kitchen,” Gregory says, walking around in the large room. “We had one regular stove.”

Now there are three double ovens, two microwaves, two stovetops, a dish sanitizer, a warming oven and a commercial refrigerator. Suttles notes that the pantry, with a freezer and ice maker, is larger than the original kitchen.

The auditorium can seat 250, and 150 or so at round tables. At the foot of the stage is a set of posters that will be used for a daylong Vacation Bible School on Oct. 25.

Suttles shows off the church office and his study, which he says is a pleasure to work in.

He’s pleased, he says, with the entire building. “I’m just thrilled with it.”

The dedication service for the multi-purpose building is set for Sunday, Oct. 5, at 11 a.m. at West Corinth Baptist Church, 120 Corinth Church Road, Mooresville, just off N.C. 152. A covered-dish dinner follows the service, and tours will take place from 2 to 5 p.m.

Did overnight guests make off with a bundle?